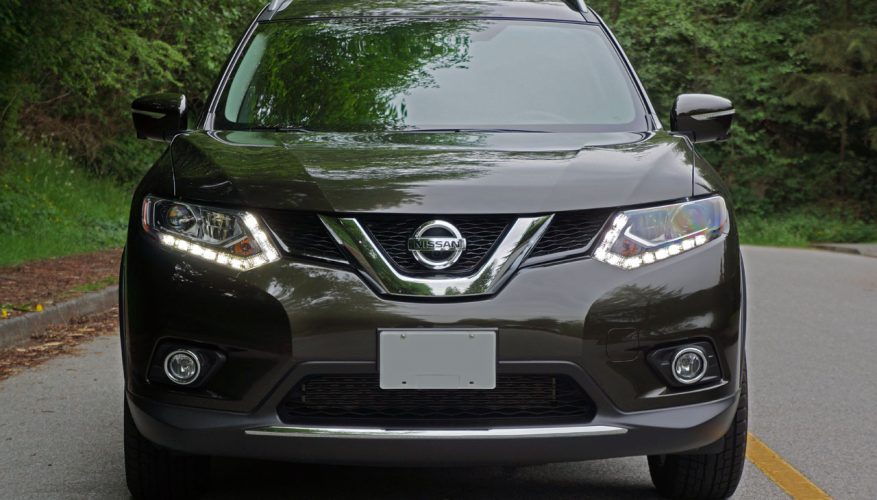 By: Trevor Hofmann
Nissan has long made comfortable, reliable, durable, fuel-efficient, feature-filled small cars that, to my eyes at least, have mostly been unattractive. Other than the 510, a personal favourite since I was a kid, a few of the older Skyline coupes that were never originally sold here, a bevy of mid-’90s Micra-based retro JDM models highlighted by the Figaro, and a few relative newcomers such as the funky Juke and its unorthodox Cube cousin, there haven’t been any compact models hailing from Yokohama that have caused me to want to grab my checkbook and head down to my local Nissan dealer. Some, like the ’70s-era F10 were downright repulsive, while late ’80s Sentras perfected the three-box design with the emphasis on box. It didn’t get much more curvaceous when Nissan entered the compact crossover segment either, its Xtrail about as sleek and sporty as a delivery van, and while the first generation Rogue that followed improved on aerodynamics it could never be considered a looker like its larger Murano sibling.

But wait. There’s newfound hope in the all-new 2014 Rogue. No, it’s beyond mere hope. The new Rogue is clearly good looking. Possibly the most attractive in its compact class. What gives Nissan? I must admit to liking the new Micra too, and while this is a different car for a future review, these two new models show that Nissan is indeed stepping up its styling game within the smaller segments, or at least becoming more appealing to my personal tastes.

Park the new Rogue beside any competitor and it immediately looks richer and more refined, not to mention better proportioned in a sleeker, more sophisticated way. This is a standout design that only gets better when climbing inside, where Nissan continues the upscale experience by delivering a cabin finished with premium details like soft-touch dash top and front door-upper surfacing. Additionally, harder plastics found elsewhere don’t give off the usual glossy sheen often seen in this class, unless meant to do so like the piano black lacquered surfaces surrounding the centre stack and lower console-mounted gearshift lever and even more appealing faux carbon fibre-look trim on the dash and door panel insets, but instead the remaining dark grey textured plastics looked and felt good.

A large panoramic sunroof shed daylight on my SL AWD-trimmed tester, this model top-of-the-line and looking like it for a price of $30,498 plus $1,630 for freight and pre-delivery prep (the base Rogue S FWD starts at $23,498). An audio, cruise, phone and multi-information display-accessing button-encrusted leather-wrapped steering wheel frames a traditionally sporty looking two-dial primary gauge package, the tachometer and speedometer bookending the large full-colour MID filled with key details, while a cluster of buttons on the dash to the lower left allows driver selection of the optional powered rear liftgate (plus a button for turning off the powered hatch – a good idea), hill decent control, all-wheel drive lock, as well as an oddly (and poorly) placed Sport mode button, plus a switch to turn off the stability control system. On the opposite side of the steering wheel is a start-stop button that comes as part of the Rogue SL’s proximity sensing smart key system, which also lets you in the car without the need to fumble in your pants or purse for your key. The HVAC system is upgraded to dual-zone automatic functionality in the SL, just another premium addition that enhances the Rogue’s overall livability. Likewise, a superb sounding Bose audio system is also standard in this trim.

Above the leather-wrapped shift knob, the centre stack gets fitted with Nissan’s excellent infotainment system and HVAC interface, the former upgraded to the $2,800 Premium Package in my tester, which adds a larger seven-inch touchscreen display integrating navigation and the brand’s impressive Around View backup monitor with Moving Object Detection.

What wasn’t included in my tester was a third row of seats, not available in the more luxury-oriented SL AWD. Instead, growing families can opt for the mid-grade SV model that can be optioned out with a third-row upgrade made possible by the new Rogue’s increased length, wheelbase and height. Rear doors that open wider allow for better access to that rearmost row too, something I appreciated even when testing out the second row. While rear seating was very accommodating in my tester there are always compromises when a third row gets added to what is essentially a large compact CUV, so don’t expect to be picking up the entire extended family and their luggage at the airport this Christmas, as it’s not going to happen unless it’s just you flying solo, plus a couple of grandparents, a sibling and spouse and two kids, with the luggage up above on the roof rack.

Then again, if it’s just weekend trips to the hardware store for you and your small family either the five- or seven-seater will do. Nissan’s EZ Flex seating system lets you fold every seat except the driver’s down, the front passenger seat also foldable in order to stow really long items. Altogether there’s 1,982 litres (70 cubic feet) of cargo space behind the front row of seats, or if you’re obliged to bring the kids along there’s 1,112 litres (39.3 cubic feet) behind the second row seatbacks. Fill up all seven seats of a fully featured SV model and you’ll be left with a mere 266 litres (9.4 cubic feet) of storage space in back, or just a bit more than you’d get in a 370Z Coupe’s trunk.

As good as the new Rogue looks it doesn’t have moves like any Z car. In fact, while my tester was shod in 225/60R18 rubber they were Yokohama Ice Guard winters, ideal for chomping through chunky white stuff, but not the best for carving up a set of fast paced corners in the dry. I’m guessing that even if it wore summer treads a Cayenne Red-painted version wouldn’t be laying claim to any Porsche-beating handling capabilities, and of course that was never its intention. Nissan made sure the Rogue’s fully independent suspension wasn’t so softly sprung that body lean would become a problem even when pushed hard. Truly, it might be too firm for some peoples’ taste, but when I took it through my local “test track” for a little exercise it performed much better than I expected and certainly well enough for safety’s sake, understeering predictably and never feeling scary. Aiding its ride quality is new Active Ride Control, a technology that automatically applies the brakes and adjusts engine torque after going over a bump to effectively smooth out rougher roads.

Nissan claims the Rogue’s appropriately named Intuitive All-Wheel Drive recognizes when its just cruising along or otherwise cornering and whether that’s on- or off-road, and then automatically reacts as needed. I can attest to its good behaviour over slippery winter roads and snow covered ski resort parking lots, although I never had opportunity to test it out at high-speed over snow or gravel.

All wheels gripped well during takeoff, however, the Rogue’s lone 2.5-litre four-cylinder engine delivering 170 horsepower and 175 lb-ft of torque through a continuously variable transmission that, while plenty responsive, was set up with fuel economy in mind. Press the aforementioned Sport mode button and any performance improvements were subtle at best, but nevertheless the Rogue pulls away from stoplights with verve and offers plenty of passing power on the highway, while its fuel economy is a little better than mid-pack for its compact CUV class at a claimed 8.2 L/100km in the city and 6.2 on the highway for the all-wheel drive model I tested, or an even thriftier 7.9 city and 6.0 highway for the front driver. The new 2015 model should improve economy yet further with the addition of an Eco mode button.

While every bit as competent all-round as any other compact crossover currently available and much better than the model it replaces, the new Rogue will grow Nissan’s market share because, as I said in the beginning, it looks a whole lot better. Certainly there are some who want seven seats in a smaller package and the Rogue will happily fill this niche, but all in all it’s styling that has the ability to turn an already popular model into a runaway success.
©(Copyright Canadian Auto Press)
Car Shopping Tools