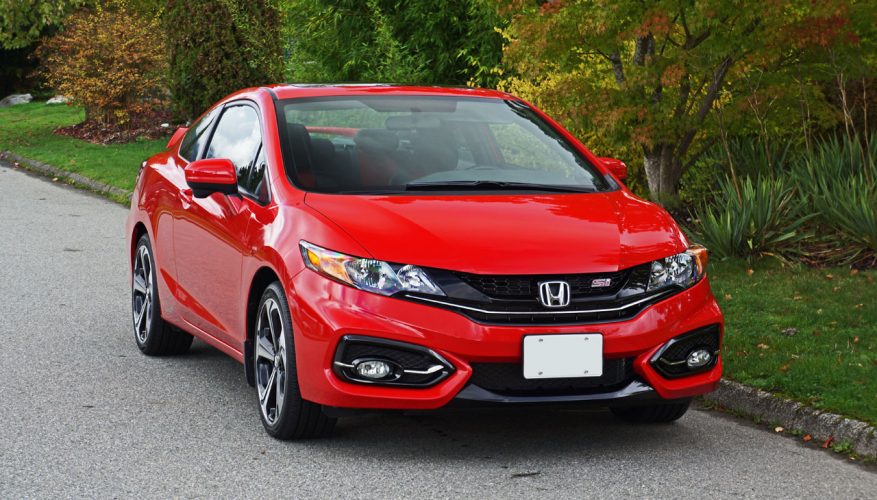 By: Trevor Hofmann
Honda restyled the iconic Civic Coupe Si last year, giving it more distinctive character overall and a richer more upscale appearance, while visually separating it from its four-door counterpart. Fortunately the revised car carried over all of the impressive interior updates made the year prior as well as updates to the modernized electronics added for the 2012 model year, but most important of all the 2014 model brought revisions to the Si’s steering and suspension designed to appease the Si’s many enthusiast fans put off after the ninth-generation 2012 overhaul.

The problem? This is a performance car first and foremost and the redesigned 2012 Si lacked the sharp reflexes of previous models. Honda made some improvements for 2013 but steering feel still suffered and the car endured too much body roll during hard cornering to satisfy hardcore users, all of which were addressed with the thoroughly updated 2014 Civic Coupe Si, and fortunately for everyone affected the entire car continues forward into 2015 unchanged.

I’ve been a big fan of the aptly named “Sport injected” Civic since it came into existence way back in the mid-’80s during the popular compact’s third-generation, still one of my favourite small car designs. That was when it was only available in a hatchback body style, whereas today’s Si, just like its more basic non-Si siblings, can only be had in two-door coupe and four-door sedan forms in this portion of the world. This is where I profess humble gratitude that the car is still available at all. So many performance-dedicated models have disappeared over the years, having made room for greener more fuel-efficient variants, that I find it hard to complain when a company gets its sport-tuned model a bit wrong with a given update, but you’ve to hand it to Honda for not only keeping the hairy-chested Si in its lineup but also for listening to the car’s many zealous fans and immediately remedying its few mistakes.

And what exactly have the engineers done? After providing a more rigid ACE II body structure they gave the car a quicker ratio version of its motion-adaptive electric-assisted rack-and-pinion steering system while adding stiffer front springs along with thicker front and rear antiroll bars with Teflon-lined mounting bushings, or basically what they did to improve the Sedan Si the year before. Added to this, slightly larger and wider 225/40R18 Continental ContiProContact tires allow better grip in all situations (the 2013 Coupe Si ran on Michelin 215/45R17s).

I didn’t have opportunity to take to the track, but there’s no way I’d spend a week with an Si and not test it out on a couple of my favourite haunts, one an idyllic mountainside two-lane twister that spirals its way down to a sparsely populated (read not much traffic) waterfront community. Dry in some spots while wet in others, my test course combines stretches of near perfect pavement with a patchwork quilt of repairs that’ll wring the worst out of any car’s chassis, which makes me all the happier to report that the new and improved Si responded well. It feels a lot more composed during aggressive cornering, with less body roll and much less understeer, allowing better balance and therefore a lot more speed through tight curvy stretches. Honda relies on a helical-type limited-slip differential to put power down to the front wheels, which when combined with the Si’s standard traction and stability control resulted in complete confidence through the corners even on the wet patches of tarmac I just spoke of.

An upgrade I found harder to notice was the engine’s extra 4 horsepower and identical 4 lb-ft of torque, for a new total of 205 horsepower and 174 lb-ft. The sound the engine made, however, seemed a bit raspier and therefore more enjoyable in the higher revs, the result of a new exhaust system that’s the key reason for the improved output numbers. While I’m tempted to refer to the 16-valve, 2.4-litre, i-VTEC-enhanced 2.4-litre four-cylinder as the heart of this car, which is often the case with any sport model, it’s the Si’s sublime close-ratio six-speed manual that deserves heaps upon heaps of steady praise. It’s easily one of the best gearboxes in the industry matched to a perfectly weighted clutch that comes as part of an ideally spaced pedal package for heal-toe application, resulting in combined hand- and pedal-actuated drivingasm (sorry for the typo… getting used to a new keyboard).

The drive experience isn’t the only reason why Coupe Si drivers smile more often than other performance car owners, as its fuel economy is very good with a revised five-cycle Transport Canada claimed rating of 10.8 L/100km in the city, 7.6 on the highway and 9.4 combined, making the Civic Si one of the least expensive performance cars to run despite its requirement for pricier premium unleaded.

Another reason to grin is the Si’s cabin, one of the best in its class. Yet more proof that Honda listens to its customers, only a year after the 2012 iteration debuted with poorer perceived quality despite much improved electronics, its cheap plastic surfaces were recovered with nice soft-touch trim on the dash and door uppers plus other premium treatments designed to put an end to all naysayers, including yours truly. Last year Honda added a sporty red pushbutton ignition to go along with proximity-sensing access while also updating the infotainment system with a big new 7.0-inch colour touchscreen interface replete with everything but regular old knobs and buttons. Standard navigation, a multi-angle back-up camera with dynamic guidelines, and Honda’s exclusive (and totally brilliant) LaneWatch blind spot display that shows passenger-side rearward real-time video when the right turn signal is clicked into position joins updated 360-watt seven-speaker audio with Bluetooth streaming, satellite radio, text message functionality, aux and HDMI jacks, two USB inputs, Siri Eyes Free, illuminated steering wheel-mounted audio controls, and a touch-sensitive digital sliding volume controller that’s about as useful as all the other such systems out there, or rather nowhere near as user-friendly as good old rotating knobs. On the positive this system allows for tap, swipe and pinch capabilities similar to today’s smartphones, along with an updated version of HondaLink for connecting those phones in the first place, all working without a hitch despite iOS8’s completely inept Bluetooth compatibility (if you want to find out how to get updates wrong, just get an iPhone). Just in case you’re put off by the advanced electronics, the Si’s tilt and telescoping leather-wrapped steering wheel gets a handy set of audio, cruise and phone buttons on its spokes, plus controllers for the TFT multi-information screen just ahead in the primary gauge package, while auto-on/off headlights, speed-sensing variable intermittent wipers, heated power side mirrors, automatic climate control with air-filtration, aluminum-trimmed sport pedals and a powered tilt and slide moonroof make for a very full standard feature set.

The Si’s sensationally reupholstered black and red Recaro sport seats are totally satisfying as well as two-way heated for cold Canadian winter mornings, the six-way manually adjustable driver’s seat shaped to cup the body in all the right places while providing the level of support my lower back craves. The rear seats, while wearing identically stylish duds aren’t up to the same level of lateral load, so beware of drifting out the Si’s rear end when little ones are aboard or the thrill ride giggles might result in conking heads and tears (bad daddy). On that note the rear isn’t designed for extremely large people, but then again you can almost comfortably double-date in the Coupe Si whereas trying to do the same in Scion’s FR-S or Subaru’s BRZ might result in complaints from the fairer sex even before arriving at the first stop.

The Si’s cargo hold is equally accommodating, with a full 331 litres of capacity that’s incidentally 135 litres greater than that sporty little Scibaru, while 60/40 split-folding rear seatbacks open up even more room for longer items like skis. That you can alternatively get all of the Coupe Si’s goodness in the much more practical four-door Sedan Si is another element to the Honda duo’s success, but that’s a different review for another time.

From design to performance, interior refinement to electronic improvements the 2014 Honda Civic Coupe Si was a big improvement over its predecessor, and the renewed 2015 model carries this banner forward with the same unbridled enthusiasm. Well done Honda, your sport compact icon is back to its old tricks.
©(Copyright Canadian Auto Press)
Car Shopping Tools