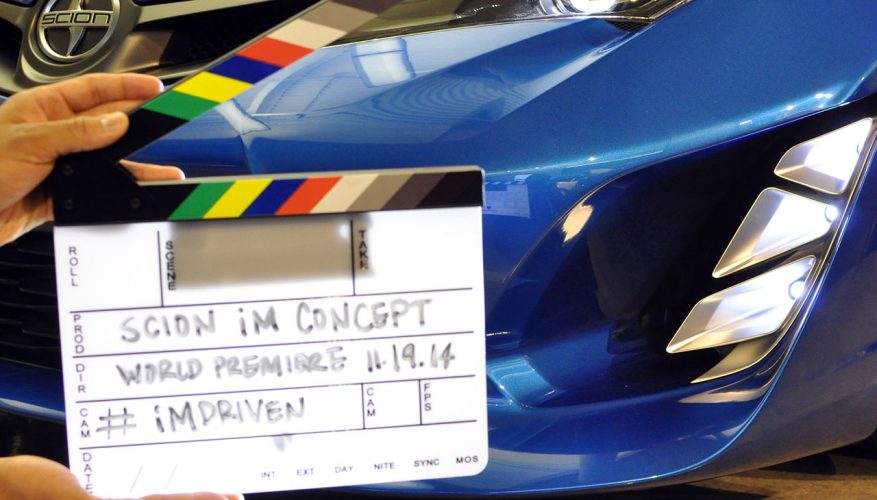 By: Trevor Hofmann
Are you ready for the iM? With Scion’s biggest seller being its 2+2 FR-S sports coupe (which is never the way it’s supposed to work) it’s about time the Toyota tuner brand at least teased us with another future model. So what’s in store? We haven’t a clue, because Scion’s teaser image of the new iM Concept doesn’t show us much more than its vague press release tells us.

All Scion is willing to reveal is that its new iM Concept boasts a “distinctively sporty front end” and that “the iM Concept car reflects the evolution of Scion as the needs and desires of its youthful customers also evolve.”

Well hold on, that does tell us something. Should we expect a sporty car for young families? A small wagon possibly? All we’re left with are questions without even enough answers for semi-educated conjecture, but don’t worry, we’ll do our best to speculate.

On that note, the tiny image shown looks a lot like the front grille and headlight of Toyota’s Auris, which is basically a five-door Matrix-like hatchback/wagon also based on the back of a Corolla. If so it’s a decent looking little family hauler, but hardly the shot in the arm that Scion needs. Then again, there are certainly a lot of disenfranchised Matrix owners in the U.S. (and soon in Canada) that would love the chance to buy another Corolla-based wagon now that Neo’s ride (or should we say Trinity’s ride considering the car’s female-skewed demographic) has been discontinued.

This in mind, an Auris sold under the Scion brand might be the ideal fit. The Matrix was discontinued because it hasn’t been selling well in the U.S. and therefore no new one was planned on the back of the recently redesigned Corolla, which is why we’re seeing it leave Canada too. Hatchbacks continue to be critically important here in Canada, however, which is why the Matrix has done fairly good business here this year, even in its aging state. The simple solution for Toyota Canada would be to bring the Auris here under the Matrix nameplate, but there might be an even better plan that would not only deliver a Matrix-like vehicle to Canadian Toyota dealers but also help to reinvigorate Scion here and in the U.S. Let’s consider that even current Matrix sales numbers would feel like hitting a home run within Scion, a beleaguered brand that experiences nearly five times the sales from its niche-market 2+2 FR-S than its least expensive entry-level iQ, and an even less appealing gap from its subcompact xD.

Case in point: Toyota Canada had sold 5,939 Matrix hatchbacks for 2014 up to the end of September, whereas its Scion division only sold 1,334 FR-S sport coupes, 972 tC sporty coupes, 520 of its boxy xB compact crossover/wagons, 280 iQ microcars, and 230 xD subcompact hatchbacks. Some quick math shows that YTD 2014 Scion sales total just 3,336 units north of the 49th, which means that it could more than double future deliveries by simply having a rebadged Auris within its lineup and then being grandfathered those aforementioned disenfranchised Matrix buyers. The percentages wouldn’t be as high in the U.S. market, but any new Scion sales would be a big boost for Toyota VP Doug Murtha and his youth brand.

Of course, all of this is pure speculation despite it appearing to be a simple and practical solution to help balance Scion’s books. We’ll know the truth in less than a month’s time when the iM Concept gets unwrapped on November 19th at 3:40 pm in the LA auto show’s South Hall. Until then, feel free to prognosticate all you want. After all, even the “M” in the name causes one to pause: iM… I am Matrix?