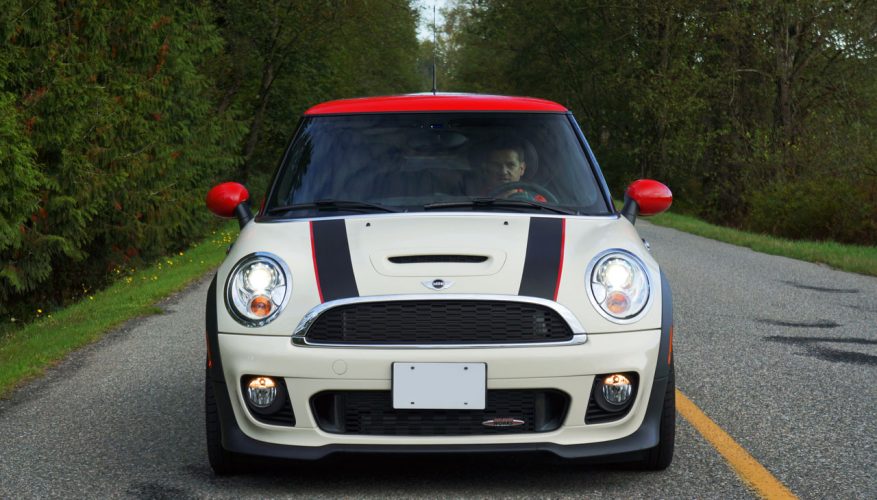 By: Trevor Hofmann
Try to look this car up on the Mini.ca website and it will be glaringly absent, made all the more obvious by six other 2014 models available with special John Cooper Works upgrades. You can get a new 2014 JCW Clubman, Convertible, Coupe, Roadster, Paceman or Countryman, but the 2014 JCW Hardtop is nowhere to be seen. What’s the problem? The fact is that Mini never made one. With the all-new Mini Hardtop having only arrived in base Cooper and mid-grade Cooper S trims for the 2014 model year, the JCW version, which is expected to be the most powerful production Mini ever made at somewhere around 230 horsepower, is still forthcoming.

The car you see here is a brand new 2013 John Cooper Works Hardtop that I drove only a couple of weeks ago. And what of the 2014 designation in the title of this review? Ah, yes that. I (ahem) “mistakenly” typed that in just out of habit. Oh alright… with 2015 model year Minis upon us I admit that I did it on purpose so that I could include this review as a late 2014 entry. If I didn’t, how else would I have been able to test it out and tell you the tale? I hope you can forgive me this indiscretion, but I promise you it was well worth it.

Other than a bright red striped, roofed and mirror capped glossy black John Cooper Works Countryman I tested and reviewed last year, the only JCW covered previously was a totally understated metallic black 2009 Convertible with a tan interior. That’s the beauty of Mini. You can cloak your super-subcompact in tastefully discrete clothing in order to blend into the background or alternatively give the royal salute to the entire constabulary as you blast past in bright white and blazing red striped impudence. My latest tester was the latter, and while it might turn every head as it passes by including those capped off with precinct shields, it sure looked fabulous.

Fortunately, the JCW hardtop makes an excellent getaway car, not that I’m promoting anything illegal. With Sport button pressed and manual mode selected on its automatic gearbox, the little JCW pulled off the line with the kind of enthusiasm expected of a Monte Carlo rally car, its blistering pace and quick, flat lane changing capability making me feel like “Handsome” Rob fleeing through Los Angeles’ underground sewage network while Steve is hovering overhead, desperately trying to figure out what’s going on with his gold, but I digress. OK, as much as I love Jason Statham’s calm, cool and collected character in The Italian Job take two, I’ve got hair so I suppose Mark Wahlberg’s Charlie Croker character will have to do, as I deep dive into double digression. Either way, there’s no better way to get in and out of tight city spaces than from behind the wheel of a super-tuned Mini, and the John Cooper Works Hardtop is the fastest factory-prepped option out there.

Compared to the base Cooper Hardtop of the same design, the direct injected and twin-scroll turbocharged JCW-tuned version of Mini’s 1.6-litre four-cylinder engine makes 87 more horsepower and 78 additional lb-ft of torque, or on overboost 93 lb-ft of extra twist! The numbers are 208 horsepower and 192 lb-ft of torque, with a max of 207 lb-ft. In a car that weighs just 1,215 kilos (2,678 lbs) that’s a whole lot of forward thrust, and then combined with its beefy standard 17-inch rims and 205/45R17 runflats and optional sport suspension it’s a real slicer and dicer in the curves.

While a city slicker extraordinaire, better for quickly zipping through thick congested traffic than pretty well any other car in existence, I made the wise choice and headed for the countryside. Why duke it out with bored commuters and mad shoppers when perfectly open two-lane nirvana was only a short drive away? The JCW feels right at home fast tracking over the uneven tarmac, past the fallen debris and around the twisting tight switchbacks that a long forgotten rural road throws in ones way, and while it seemed impossible to break the car’s grip no matter how quickly I pushed the little imp, its ride quality was surprisingly good. This is a Mini trait, and important when hard-charging over road surfaces that aren’t as impeccably smoothed over as Russia’s new Formula 1 track in the Olympian town of Sochi. Due to the Mini Hardtop’s diminutive size and subsequently short 2,467-mm wheelbase, its body shell is as rigid as rigid can be, thus allowing the suspension to be set up a little softer with greater wheel travel than those pavement-clinging ultra-bouncy hyper-tuned (and hyper-flexing) Japanese specials that show up in movies like The Fast and the Furious: Tokyo Drift. Put one of those cars on a backcountry road like the one I flew over in the JCW and the little Mini would leave it in the dust every time, no matter how much power the aftermarket tuned car had under its hood.

As stock as it was, my latest JCW tester looked like it was dressed up by one of Hollywood’s auto tuners. While kitted out with Chili Red mirror caps, rooftop and rear-mounted spoiler, plus the same bold red pin-lining a set of thick black stripes running down both sides of its hood, all matching its red-painted JCW calipers that bind down on larger diameter rotors framed by gloss black cross-spoke LT alloy rims, it was a livery that could at once rally angels from on high as well as the mephistophelian masses.

Inside, a similar custom look revealed the same Chili Red adorning the dash and door trim, a perfect match to the red piping on its Champion black leather seats and red stitching just about everywhere else. A sportier cabin couldn’t be had in a Ferrari, nor a better equipped one. Mini, while producing some of the smallest cars on the market, nevertheless finishes them off to premium levels of refinement, with soft-touch surfaces and lots of chrome detailing, especially appreciated on the classic retro toggle switches lined up on the centre stack and hanging above from the overhead console. In the JCW, primary gauges that are normally white faced are a deep grey with white and red painted numbers and lettering, plus additional info made available digitally via red LCD. A thick leather-wrapped multi-function steering wheel feels just right in the palms and fingers, aluminum finished pedals ideally placed beneath, and chrome and leather-adorned shifter perfectly positioned within easy reach, although as mentioned paddle-shifters come standard as part of JCW upgraded cars fitted with automatic transmissions.

The JCW is so well equipped that only one option group is available, Mini’s Wired Package that adds USB and Bluetooth streaming audio, smartphone integration, voice recognition, Mini Connected (which is without exaggeration one of the best infotainment systems on the market, especially if you’re hooking up an iPhone), and a navigation system, all set within the big charger plate-sized central speedometer, the needle of which spins around the outside of the infotainment display for a multi-colour visual that really looks fabulous.

Standalone options on my tester included sport suspension I mentioned before, proximity sensing keyless Comfort Access, rear fog lights, and a Harmon/Kardon audio system upgrade that delivered great sound quality. I won’t go into what else could be had with this particular model, because this might just be the last one available anywhere in the country.

Despite the JCW’s quicker performance, fuel economy is the same as the Cooper S at a claimed rating of 7.7 L/100km city, 5.6 highway and 6.8 combined with the manual or 7.9, 5.8 and 7.0 with the automatic. Not bad at all, but keep in mind that these numbers reflect Transport Canada’s old two-cycle rating system, so an identical 2015 model car (if there were to be such a thing) wouldn’t fair as well numerically as it will be subject to the new five-cycle test. Therefore use these numbers for 2014 model year comparison purposes only.

Practicalities in mind, the Hardtop’s rear seat is roomy for two reasonably sized adults with plenty of hip, shoulder and headroom, while the cargo area is tight at 161 litres but can be expanded to a sizable 680 litres by folding the 50/50 split-folding rear seatbacks down.

That’s the true beauty of the JCW Hardtop. While a very real sports car in every way, it’s as practical as most any four-seat city car. And with pricing that starts at $36,900 plus freight, the John Cooper Works Hardtop is well within reach of the majority of performance enthusiasts. Just don’t wait too long to pick this very rare example up if you want to buy new, as I can’t see it being available much longer.
©(Copyright Canadian Auto Press)
Car Shopping Tools