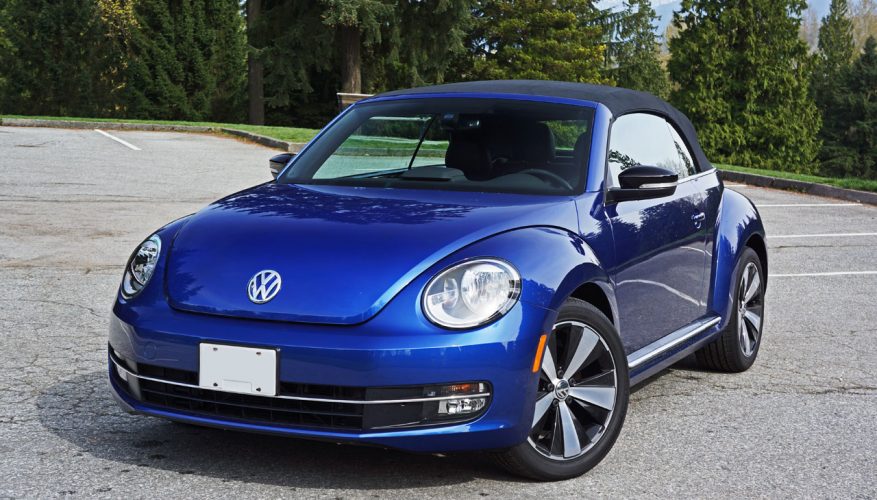 By: Trevor Hofmann
In one styling update, Volkswagen’s once iconic although eventually tired and dated looking “New Beetle” became as fresh and stylish as it was when new, with the added benefit of being much more appealing to the more masculine set.

I fall into that latter grouping, and while not particularly muscled up and hardly machismo, I’m a guy who likes cars with a little more testosterone in their tanks. Something about the latest Beetle’s design speaks volumes to those of us who prefer gutsy over cutesy, but I can’t exactly place what specific design element does the trick. Likely it’s a combination of everything, from its long, wide, rectangular front bumper vents and the squared off edging of its hood just above, to its longer hood-line and front fenders, plus its shorter rear deck, squared off trunk lid and sharply angled taillights. All in all it’s a tougher, sportier looking Beetle that easily has enough chutzpa to stare down the surprised deer in the headlights look ingratiating the pudgy little 2015 Mini Cooper Hardtop’s face, its main retro rival.

It helped that my Beetle Convertible tester was outfitted in Sportline trim, complete with a sweet looking set of classic five-spoke 18-inch alloys on 235/45R18 Hankook Optimo rubber that framed racier red brake calipers, all set on a hunkered down sport suspension. Its bold Reef Blue Metallic paint is hardly a pastel pink or wishy-washy yellow either, while long gone is the plastic vase and equally unreal daisy that adorned the original front-engine, front-drive VeeDub Bug. Rather, the Sportline gets a positively manly eight-speaker 400-watt Fender premium audio system made by the same name that builds guitars and amps for the world’s mega rock star elite as well as the rest of us weekend wannabes, while a slick navigation system gets added to the Beetle’s small but superbly designed five-inch touchscreen infotainment system.

Along with a Beetle that’s digitally aligned with its competitive set, cabin materials quality is better than ever too. VW adds a carbon-look dash and piano black lacquered door uppers to the Sportline that I could have done without, wishing my tester’s interior trim was body-colour instead, but that’s a moot point in an otherwise solid step upmarket. My tester’s leather upholstered eight-way manually adjustable sport seats delivered good lateral support through the corners, but unfortunately the adjustable lumbar support didn’t push out far enough to help an aching back I was suffering from that week. Then again the car’s near-therapeutic three-way seat heaters worked wonders for the heat portion of my treatment, just one of many features that come standard with the Sportline. In fact, other than the $1,400 paddle-actuated Tiptronic manual and Sport mode-infused six-speed double-clutch automated DSG gearbox it was impossible to add any options to the $36,850 Beetle Convertible Sportline (plus $1,395 for freight and pre-delivery prep), just a list of the usual accessories you can choose at the dealer level.

That brilliantly quick-shifting transmission replaced what would have otherwise been a six-speed manual; either set of cogs a nice match to the Sportline’s 2.0-litre direct injected and turbocharged four-cylinder. The engine makes 210 horsepower and 207 lb-ft of torque, ample for cocky blasts off the line and impudent passing power, while its smooth operation is also ideal for a little around-town R&R. The sound of the engine’s direct injection reminds me of my dad’s air-cooled ’67 Beetle, although playing a more subdued note, and I bet a set of paddles would have helped its 50-horsepower mill push the car along a little faster too, although I’m not talking about the kind of paddles you finger flick from behind the steering wheel. Back then we couldn’t have dreamed up anything like today’s shifter paddles, but in the Beetle Sportline they make rowing through the DSG’s six forward gears a thoroughly engaging experience, especially when Sport mode is dialed in.

Likewise the Beetle Convertible Sportline is a load of fun through the curves. The car’s independent front strut and four-link rear suspension setup is inherently good, enhanced by the Sportline’s aforementioned sport suspension and those bigger, fatter tires I also spoke of earlier, for a lot of grip when pushed hard. I’m not going to say it feels as confidence inspiring as a Golf GTI, but few compacts do. Rather, it comes pretty close to emulating its hatchback sibling, in a more upright classic VW fashion.

Upright in mind, front seat headroom, while limitless in convertible guise, is a Beetle attribute that few competitors can measure up to when tops are raised. The Beetle Convertible’s fully powered fabric roof can be raised in easily enough time to take advantage of a stoplight pause, sealing off the world in a well-insulated cocoon that makes it feel more coupe-like than otherwise. While the front seats are spacious, those in back might feel a bit more cramped unless smaller sized. Likewise the 50/50 split-folding rear seatbacks came in mighty handy when attempting to load longer items into the similarly abbreviated 201-litre trunk.

Of course, those buying into the compact convertible segment aren’t normally prioritizing cargo capacity, but rather have their hearts set on the luxuries in life. The Beetle Sportline has these covered, with standard proximity sensing keyless access to make you feel special before you even get inside, complemented by handy pushbutton ignition, the aforementioned leather upholstery, automatic headlights, rain-sensing wipers, an auto-dimming rearview mirror, the great sounding Fender audio system I commented on before, and a set of fog lights. The Sportline also includes a number of features carried over from the base Beetle Convertible Comfortline, such as a leather-wrapped tilt and telescopic multifunction steering wheel, a leather-wrapped shift knob and handbrake lever, cruise control with active display, a multifunction trip computer, audio equipment including a Media Device Interface with iPod connectivity, auxiliary input, satellite radio and Bluetooth phone connectivity, power adjustable and heatable side mirrors, daytime running lights, plus LED turn signals on the exterior mirror housings.

Along with a full assortment of airbags plus active safety that includes traction and stability control as well as ABS-enhanced four-wheel disc brakes, all Beetle Convertible trims get active rollover protection that includes roll bars hidden behind the rear seat head restraints that automatically deploy if a rollover is imminent.

Fuel economy is a Beetle boon and the drop-top version is no different, with manual equipped cars boasting a claimed 9.4 L/100km in the city and 6.4 on the highway, and DSG automatic models rated a little better in the city at 9.0 L/100km, and a little less thrifty on the highway at 6.8. If you want a car that’s even stingier at the pump, a Beetle Convertible powered with Volkswagen’s 1.8-litre four-cylinder is good for a claimed 8.5 in the city and 6.1 on the highway via its standard six-speed automatic transmission, and the car puts out a pretty decent 170 horsepower and 184 lb-ft of torque, so it’s not like you’ll be missing all that much in straight-line performance. Expect all of these numbers to change for the 2015 model year due to Transport Canada’s stricter five-cycle test, but they’re useful for comparing the Beetle Convertible’s mileage to other 2014 model year cars just the same.

Then again, there aren’t a lot of cars that compare to the Beetle Convertible. There’s the aforementioned Mini Cooper Convertible, Fiat’s smaller 500C that’s not quite a full drop-top, and maybe the Mazda MX-5, although it’s missing rear seats. No, Volkswagen has carved out quite the comfortable little niche for the Beetle drop-top and its hardtop sibling, so it’s great to see they’ve brought such an impressive successor to carry the classic shape forward into the future.

The Beetle isn’t merely a fun-loving cutesy compact paying half-hearted tribute to its rear-engined ancestor’s history anymore, but rather this redesigned model is a very competent car all on its own.
©(Copyright Canadian Auto Press)
Car Shopping Tools