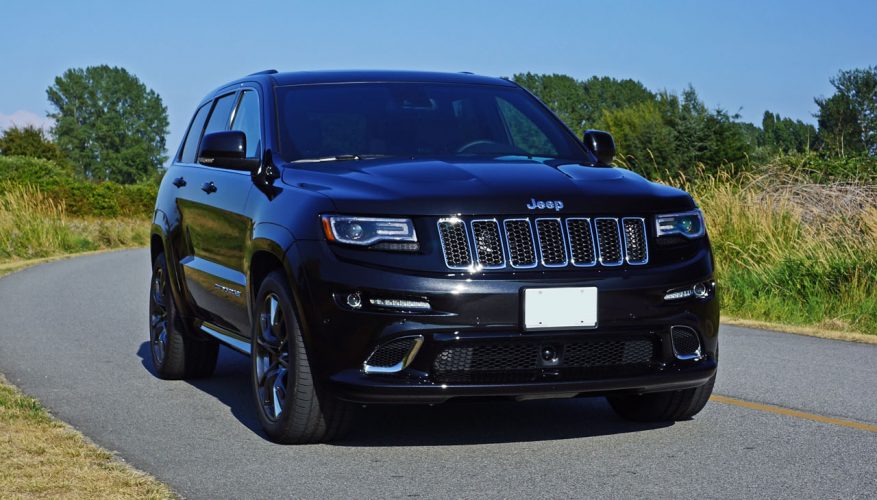 By: Trevor Hofmann
Want a mid-size performance SUV that can run the wheels off of many of today’s so-called sports cars? Step up to the premium brands and there’s a wealth of pricy top-line offerings, from Land Rover’s new $91,490 Range Rover Sport Supercharged to Mercedes’ $104,400 ML 63 AMG, and of course Porsche’s impressive $128,200 Cayenne Turbo. A brand that might not immediately come to mind, however, is made by the American brand that invented the sport utility class, Jeep and its shockingly capable yet comparably very affordable $64,895 Grand Cherokee SRT.

There’s nothing that even comes close to the Grand Cherokee SRT’s performance below its price point or for that matter between its mid-$60s MSRP and the Range Rover Sport Supercharged’s stratospheric $90-plus range. So can the homegrown GC SRT actually run with these six-figure Europeans? Despite being the only one of these four under the 500-horsepower threshold, the 470-horse SRT will scoot to 100 km/h in a scant 4.9 seconds, which is only 0.1 seconds slower than the ML 63 AMG and 0.2 seconds adrift than the mighty Cayenne Turbo, while 0.4 seconds quicker than the Range Rover Sport Supercharged. What’s more, its 255 km/h top speed is only bested by the Porsche’s 278-km/h terminal velocity, the Merc good for 250 and the Rover for just 225 km/h.

If you’ve ever planted your foot on the throttle to see what your ride can do you’ll appreciate that 0.1 seconds can’t possibly be perceived without the necessary digital hardware, although half a second is sizable enough to be noticeable. From my seat of the pants expertise it’s a moot point because I almost never drive like this unless purposely testing a vehicle for one of my reviews. There are so many aspects to a performance vehicle that matter more, like how all of this speed comes to be and how well all the hardware combines together to achieve a confidence-inspiring experience.

To begin, the SRT’s hardware includes some impressive kit. At the heart of the matter is Chrysler group’s fabulous 470 horsepower 6.4-litre Hemi V8: an old-school two overhead valve per cylinder pushrod mill that might seem anachronistic to some yet still gets the job done brilliantly while sounding absolutely fabulous doing so. The engine isn’t without new technology within, mind you. It boasts an active intake manifold and high-lift camshaft with cam phasing to optimize top-end power while simultaneously delivering strong low-end torque – 90 percent of the engine’s 465 lb-ft of torque is available between 2,800 and 6,000 rpm.

One GC SRT component that held back previous iterations was its old five-speed automatic, but that’s now history, replaced by a sophisticated new paddle-shift actuated eight-speed gearbox that might still boast classic TorqueFlite branding but in reality comes from the same Friedrichshafen, Germany ZF factory that builds transmissions for two of the three aforementioned premium SUVs – fine company indeed. The new set of cogs is responsible for a few tenths off the zero to 100 km/h sprint as well as fuel economy improvements, although its 16.6 L/100km city and 10.7 highway rating won’t likely be the reason you’ll opt for this particular Grand Cherokee model, the 3.0-litre EcoDiesel much thriftier at a claimed 10.9 L/100km city and 7.8 highway. Another bonus the new transmission brings to the table is a tow rating up near its luxury rivals, the GC SRT now capable of hauling a 3,265-kilo (7,200-lb) trailer.

As tempting as taking an SRT and a camp trailer for a little R&R sounds, my guess is that you’ll be hauling something very different in this flagship Jeep. Aiding your quest to shave milliseconds from your stoplight response times is Launch Control, while rev-matched downshifts will make sure you ideally set up the entrance of every corner to maximize exit speed. You’ll want to set the SRT to Sport mode ahead of time, just one of five driver-selectable modes that also include Auto, Tow, Track and Snow. Yes, as you may have already noticed the Sport, Tow and Track modes replace the regular off-roader’s Sand, Mud and Rock settings, not to mention the surrounding 4WD LOW (replaced with the Launch Control button), hill decent control and adaptive suspension’s UP and DOWN buttons. The SRT’s 4×4 system isn’t quite the same off-road master as it is with the regular model.

The Quadra-Trac SRT active-on-demand transfer case will make sure you won’t attract unwanted attention from the constabulary with screeching tires. It not only puts all four tires into action at takeoff for relentless grip and (almost) zero burnout potential, but also acts as a torque vectoring system by apportioning twist between the front and rear axles so as to mete out more neutral high-speed maneuverability. The GC SRT doesn’t shortchange on electronic driving aids either, its Selec-Track traction control system coordinating the SUV’s aforementioned transmission shift strategy and transfer case torque proportioning with the stability control system, adaptive damping, electronic limited slip differential, throttle control and cylinder de-activation – yes, even this hard-charging V8 incorporates Chrysler’s fuel-saving MDS, or Multi-Displacement System, for maximizing every drop of fuel.

As important as the SRT’s go factor is its woe factor, Brembo brakes balancing out the bounteous yang with a little binding yin. Six-piston front and four-piston rear calipers join up with 15.0-inch front and 13.8-inch rear vented rotors for sudden and immediate stopping power, which even after stomping aggressively on the big centre pedal over and over again while running the GC SRT hard through a favourite set of mountain switchbacks resulted in near zero fade.

It is during such moments that a person really needs to ask deep within oneself whether a premium badge is all its cracked up to be, because this Grand Cherokee SRT is about as much fun through the corners as anything from any of the first world old countries. Its previously unfathomably fat (for a stock SUV) 295/45ZR20 all-season Pirellis on 20-inch Goliath polished forged aluminum rims look almost as brilliant as they hold the curve, its four coil springs, front and rear stabilizer bars and Bilstein adaptive damping system making the midsize ute feel more like a super sport wagon than a tallish SUV.

Its always appreciated when a vehicle goes as nicely as it shows, the Grand Cherokee SRT shining up beautifully thanks to a blacked out grille plus blackened headlamps and taillights, a revised front bumper that now extends upward towards each corner, plus cool new headlamp panels that give the Jeep’s eyes a uniquely menacing slant. The iconic brand added a new set of LED taillights and reshaped tailgate for 2014 too, while ultra-aggressive front and rear fascias, blackened trim and a wicked twin five-spoke wheel design is only made more attractive by the bright red Brembo calipers framed inside. This is no ordinary GC, and anyone with any automotive wisdom (including those at the wheel of the aforementioned Europeans) will know not to mess with you.

And while some will be turning their noses up at what they unknowingly consider lower-level luxury, take comfort in the SRT’s supportive Nappa leather and suede upholstered sport seats while gazing upon the gorgeous real carbon fibre trimmed dash, centre stack and door panels, some of the largest and best full-colour touchscreen infotainment in the industry (user-friendly Uconnect Access with a configurable 8.4-inch screen and available Wi-Fi hotspot capability is new this year), plus myriad tech all-round that helps to elevate this special Jeep into premium status. A perfectly formed three-spoke flat-bottomed steering wheel encircles an attractive and feature-filled gauge cluster, both new for 2014, while the dash-top above is stitched leather. Soft-touch plastics cover the majority of surfaces not already skinned in genuine hides, metal or CFRP. The switchgear is superb too, while the stock nine-speaker 506-watt AM/FM/satellite radio/CD audio system is “awesome”, or so I’m reminded of via my notes, and it wasn’t even the optional 19-speaker 825-watt Harmon/Kardon system. All roof pillars are wrapped in cloth, as expected in the premium class, while overhead a de rigueur dual-pane panoramic glass sunroof (optional) bathed my tester’s upscale interior in daylight and/or moonlight. And it didn’t creek one iota, even when the SUV was enduring the stresses of hard cornering on abusively uneven pavement. On that note, while the 12-way driver and front passenger seats are sumptuously comfortable as mentioned, and come fitted with lumbar adjustment and two-way driver memory, adjustable bolsters would have been helpful for holding me in place while driving aggressively as the back inset is a bit wide for my smaller frame.

So it’s up to you. You can spend upwards of six figures on a pricey European super-SUV and enjoy the cachet of a fancy badge and, let’s be reasonable, a very impressive performance machine, or you can save $30-$55k while getting all of the straight-line speed and outrageously capable handling plus most of the luxury with a made-in-Detroit Jeep, a name endowed with significant heritage of its own. I don’t know about you, but I can think of a lot of things to do with $50k, and in the Grand Cherokee SRT I can get them all done a lot faster.