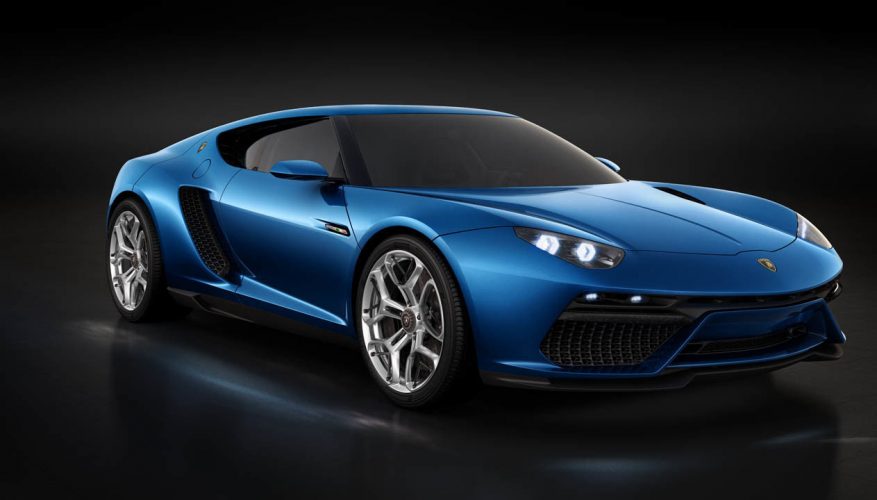 By: Trevor Hofmann
Disappointed? It’s difficult to feel let down after seeing the beautiful Asterion LPI 910-4 front to back, or for that matter inside, unless you look over your shoulder for rear seats that aren’t there.

It’s a true beauty. Like all Lamborghinis, the Asterion’s cabin is luxuriously appointed with the finest of leathers, metals and, with respect to classics from the past, camel brown leather detailing that initially looks a lot like wood, while its exterior design returns some much welcome soft lines to the storied Italian company that most recently has been chiseling nothing but doorstop wedges with more hard cut angles than an F-117 Nighthawk stealth fighter.

The initial black and white profile teaser of the Asterion showed the smoother, softer lines we now see in full colour, along with a teaser message that simply stated, “Once perfection is achieved, you can just double it.” This led to much speculation, with many pundits (including yours truly) suggesting that four seats (doubling up on the marque’s numerous two-seat offerings) may have been what Lamborghini was hinting at in its cryptic message. After all, the brand hardly needs another supercar, or in this case hybrid hyper-car, but it could serious use a four-seat super-coupe to do battle with Ferrari’s fabulous FF.

Certainly the upcoming Urus crossover SUV will seat four, and while this model will be important for the brand’s continued success, as may also be a production version of the stunning Estoque four-door coupe, many feel a real four-seat two-door coupe should be the next model in the company’s expansion plans. The last four-place car to wear the raging bull badge was the Urraco, which ceased production in 1979. In comparison, Ferrari has successively built four-seaters going back to the 330 GT 2+2 of 1964.

While some Lamborghini fans (especially those with kids) may be disappointed with the Asterion’s “same old” two-seat, mid-engine layout, those with quasi-environmental leanings should be intrigued. It would be improper to consider the Asterion a true eco-champion, when its main mode of propulsion is the brand’s 610 metric horsepower 5.2-litre V10 mated to a seven-speed DSG, despite an additional 300 horsepower being derived from a trio of electric motors for a total of 910 metric horsepower (or 897 horsepower as we measure it here in North America). Resulting acceleration equals zero to 100 km/h in 3 seconds flat, plus a top speed of 320 km/h (199 mph).

While seemingly eco-friendless, its claimed ability to travel up to 50 kilometres solely on zero emissions electric power, thanks to a large plug-in motive battery, is a step in a greener direction. Its prospective owner would be able to cruise at speeds of up to 125 km/h (78 mph) in pure electric mode too, although one shouldn’t expect to achieve the suggested 50 km range at highway speeds.

If produced, the Asterion LPI 910-4 would be the most powerful Lamborghini ever, while also making it a direct competitor to the McLaren P1 and LaFerrari. That LPI 910-4 name, incidentally, incorporates a letter not normally included in Lamborghini nomenclature, “I”. As is the usual, “LP” stands for Longitudinal Posterior, which is Lambo-speak for mid-engine. The “I” refers to “Ibrido”, which means, “crossbreed” or in this case, “hybrid”. As most Lamborghinisti know, the first three numbers in any model name refer to metric horsepower, the Asterion’s being 910, while 4 stands for all-wheel drive. Lastly, the Asterion name itself breaks with tradition as it’s not a fighting bull, but rather, since this car is a hybrid, Lamborghini named it after the half-bull/half-man Minotaur god of Greek mythological lore. Whoever came up with this witty idea was certainly thinking on their feet, as there’s an entirely new generation of upcoming Lamborghini owners raised on Rick Riordan’s Percy Jackson and the Olympians heroes, who are ready to subliminally connect with the Italian brand’s next generation of electrified supercar.

This brings up the question: Will Lamborghini produce it? Certainly there’s a market for super-priced ultra-exclusive hyper-cars, and Lamborghini has proven that it’s quite willing to build for the few, its limited-run Veneno and Sesto Elemento proof positive. So while a production version of the Asterion may eventually surface, it will more likely remain as the design exercise it is, and more importantly as an effective way to introduce the world to Sant’Agata’s first foray into plug-in hybrid electrics. As you may have guessed, the basic elements of this electrified powertrain will certainly make it to market, likely as a top-line trim level of one of Lamborghini’s next-generation flagship supercars.

Those of you hoping the brand will finally give us a true four-seat sports car will have to dust off and buff up your classic 400 GT 2+2s, Isleros, Espadas, Jaramas, and Urracos, and simply wait it out. LM002 fans will be getting their SUV in 2017, but grand touring aficionados have been put on indefinite hold.
©(Copyright Canadian Auto Press)
Car Shopping Tools