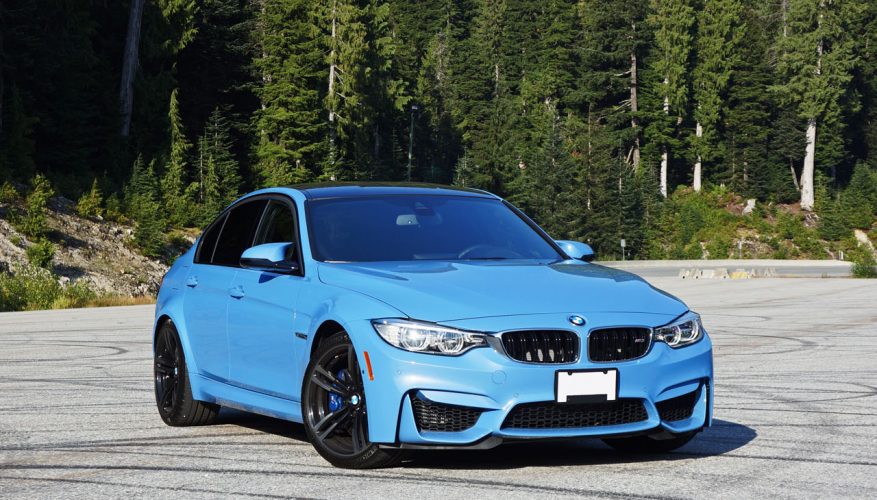 By: Trevor Hofmann
No longer a series, the M3 is a lone four-door sedan for 2015, the coupe and convertible taking on the M4 designation like their non-M 4 Series brethren. For Bimmer purists, this is sacrilege. For performance enthusiasts who will just be glad a compact four-door variant is back in the M fold since its departure at the end of the 2011 model year, this is a moot point that matters about as much as whether 400-plus horsepower is made from a V8 or turbocharged six.

Of course, there’s more to how well a car drives than merely comparisons between engine output, acceleration times and overall mass. Certainly these numbers prove that the new M3 is quicker off the line, but is it more of an adrenaline rush? That depends on what exactly turns your crank. Have you watched a Formula 1 race this year? If you have, you’ll notice the new 1.6-litre V6 turbocharged engines with their complex dual energy recovery systems don’t make the same high-pitched whine as the old 2.4-litre V8s, the cause of much complaint. They’re plenty fast and the racing has been superb, but the auditory sensation is lacking. Back on the street, as far as aural stimulation goes there’s nothing lacking when behind the wheel of the new M3, but compared to the previous car’s melodic aria the new M3’s 3.0-litre six, with its Valvetronic variable valve timing, forged crankshaft, and lightweight magnesium oil pan beneath its track-prepped lubrication system makes sounds more NASCAR than F1 seasons’ past. Don’t get me wrong as it still stirs the soul something fierce, with delightfully brutal blats from the fat tailpipes every time you shift from first to second and then second to third at high revs, but it’s a different king of strength, more Breitbart than Baryshnikov.

That’s just the way it sounds, mind you. Get the M3 up to speed, swing it into a tight corner and it’s Mikhail Nikolaevich all the way. This isn’t only the best M3 I’ve ever snaked through a serpentine back road, it’s one of the best cars I’ve ever had the privilege of piloting. Feedback from the electro-mechanical steering is ever-present no matter which of the three preset driver settings are chosen. To think that all of this engineering brilliance can be had for just $74k is shocking, especially when factoring in that it seats four adults in comfort and can stow 450 litres of gear safely away in its trunk.

Safely, that is, unless you took to the corners like I did. Anything that wasn’t tied down in the boot might as well have been strapped to an industrial paint shaker. The tail loves to wag when in “M Dynamic Mode,” a selectable setting that unleashes normally tight DSC constraints, thus allowing a little more freedom to play. The big, meaty purpose-designed 19-inch Michelins join forces with the M department’s uniquely crafted suspension, which to be clear is not shared with the regular 3 Series (actually, 70 percent of the M3 is exclusive kit), for grip that’s beyond brilliant, fully capable of staying planted securely on terra firma no matter how aggressively you tackle a curve or whether or not you manage to shift the six-speed manual or even more reactive seven-speed M-DCT dual-clutch gearbox with any modicum of expertise.

The latter snaps to attention with the immediacy of a private in fear of latrine duty, its aluminum paddle-shift automated capability shaving two-tenths of a second from the sprint to 100 km/h, and that’s when the manual is driven by an expert. Either gearbox blips the throttle when downshifting, making you sound like that expert even if the majority of your track time has been spent on Forza Motorsport, while the manual’s pedals are set up for true heel and toe shifting.

Just like what goes up must come down, all that goes fast eventually (and sometimes suddenly) needs to slow down. To this end the M3’s stopping force is almost as jaw dropping as its acceleration, thanks to a herculean set of drilled and vented four-wheel discs measuring 380 millimetres up front and 370 mm at the rear.

As mentioned above, the new 1,605-kilo M3 Sedan is a significant 85 kilograms lighter than its 2011 predecessor, which is 187 pounds for those reading from southern jurisdictions. In building the new inline-six BMW’s M division cut about 10 kg from the engine itself, plus more weight off of the more sophisticated transmissions, now featuring auto start/stop for saving fuel. Yet more weight was extracted from the driveshaft, a much stronger and incomparably lighter F1-style single-piece carbon fibre unit for 2015, while for the first time the sedan gets the same fabulous looking, mass-reducing, centre-of-gravity-lowering carbon fibre roof panel used on the coupe, albeit in a slightly different size and shape. BMW lined the trunk in the lightweight CFRP composite too, while the pièce de résistance has to be the gorgeous carbon fibre strut brace spanning the shock towers under the new domed hood. That hood is aluminum, as are the bulging front fenders, the doors, and much of the suspension components underneath. All of this adds up to an M3 that performs much better than the previous iteration, both on the road and track as well as at the pump.

Gone are the days that a fuel-economy-be-damned attitude can be seen as acceptable, at least not at BMW. Leaders in efficiencies measures, such as the start/stop system I mentioned earlier, the M3 also pulls Brake Energy Regeneration forward from the previous car, although a more advanced system. Together with the M3’s aforementioned diet, these so-named EfficientDynamics technologies help the latest M sedan to garner impressive fuel economy numbers, starting with 13.7 L/100km in the city, 9.0 on the highway and 11.6 combined for the manual, or 13.9 city, 9.7 highway and 12.0 combined for the auto. And these are based on Transport Canada’s new five-cycle rating system that’s much more realistic than our old two-cycle system, so throw out all you’ve ever been told about Canadian mileage estimates and embrace the new truth even if the numbers look a bit worse than the old fantasy.

Fantasies in mind, Ford has come under some flack recently for the stereo-enhanced engine soundtrack in its new 2015 Mustang, but the Dearborn engineers aren’t alone. Remember the M3’s big V8 sound mentioned earlier? Well, the new model incorporates something called Digital Motor Electronics (DME), which combines the engine and exhaust notes together before digitally enhancing them and feeding it all through the Harmon/Kardon audio system. You’d never know without reading it first, but it’s true and as previously testified it’s wonderful. After all, why should strangers that turn their heads your way as you blast past enjoy all the mechanical music instead of you, the one who shelled out 75 Gs?

The stereo is very skilled at playing music too, while the rest of the infotainment system is one of the best in the luxury business. Odd when you think about how much negativity BMW absorbed when it first introduced iDrive to the masses, but while being an early adapter might be painful in the short term it has its advantages when all the bugs are finally exorcised out. Now iDrive is a joy to operate and more deeply layered with utile functionality than most of its peers. Likewise the system’s colour displays deliver rich colours and crystal clarity, while additional tech such as optional head-up display adds truly useful information where your eyes should be focused, on the road ahead.

If you were thinking BMW kept all of its carbon fibre goodness on the outside and under the hood and trunk lid you’d be back in fantasyland, because the M3’s cabin basks in dark grey woven CFRP glory when you opt for the $500 upgrade. If you’re a traditionalist, woods can be had instead, or piano black plastic, aluminum, etcetera. The steering wheel, thick and substantive, feels just right in the hands, the leather of the best quality and classic blue and red M stitching making clear you’re in something very special indeed. Clear white on black gauges are legible in any light, perfectly placed paddles a finger’s flick away, the sport seats some of the most supportive and comfortable in the industry, my tester’s covered in black perforated leather with cool metal “///M” badges that light up at night. Everything in the M3 is just right.

Truly, the M3 is so well equipped in base trim that there are only four available option packages. The $4,500 Premium Package includes a back-up monitor, front and rear parking sonar, satellite radio and the head-up display I mentioned a moment ago, whereas the $5,000 Executive Package adds active LED headlights, a surround-view back-up monitor, heated rear seats, plus side sunshades and a powered rear sunshade. Want more? A $1,500 Tech Package features highbeam assist, active blind spot detection, lane departure and collision warning, plus a universal remote, while lastly the BMW ConnectedDrive Services Business Package boasts internet connectivity, real-time traffic info, and a host of BMW services and apps. Standalone options include my tester’s $3,900 double-clutch automated gearbox, a $900 adaptive M suspension, $8,500 worth of carbon ceramic brakes (featuring unique gold calipers), $400 automated parking, and more.

No matter if you leave it bone stock or load it up with everything on offer, you’ll end up driving away (very quickly) in one of the best performance cars money can buy. Combined with its aggressive new styling, impeccably detailed interior, lightweight carbon fibre-enhanced agility, prodigious performance, much improved fuel economy, and welcome return to four-door practicality, the new 2015 BMW M3 is one of my all-time favourite sports cars. I can only think of one single way BMW could make it better. Could I have mine as a five-door Touring?
©(Copyright Canadian Auto Press)
Car Shopping Tools