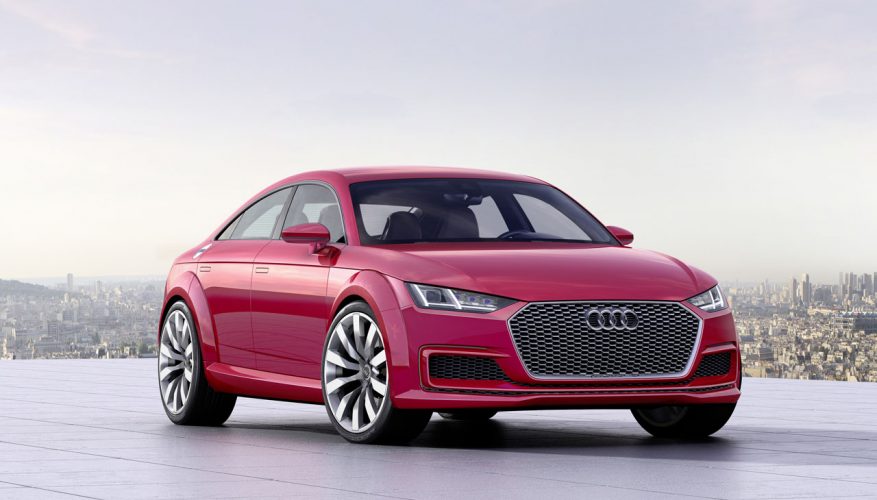 By: Trevor Hofmann
With BMW having just introduced its 2015 4 Series Gran Coupe, it only makes sense that Audi would want to fight back with another four-door coupe of its own. After all, it was in the unique sport sedan segment before BMW was, having introduced its A7 Sportback two years before BMW showed up with its 6 Series Gran Coupe. Hence, the TT Sportback Concept just introduced at the Paris motor show: an even more compact four-door fastback based on Audi’s iconic TT theme.

The oddity in this particular choice of underpinnings is the “potential TT family” that the new concept belongs to, so announced by Audi Board Member for Technical Development, Prof. Dr. Ulrich Hackenberg.

“With the TT, Audi created one of the automotive design icons of the last 20 years,” says Hackenberg. “In the years since, we have designed our sporty and elegant five‑door Audi A5 Sportback and Audi A7 Sportback. In our Audi TT Sportback concept show car, we are now fusing both concepts to form a new member of a potential TT family.”

Where BMW chooses its somewhat controversially named 4 Series line to base its new four-door coupe upon, Audi is apparently creating (or at least fleshing out) a completely new line of sporty models based on its sporty TT Coupe and Roadster. It would be like BMW launching a four-door coupe on the back of its Z4, or Mercedes-Benz choosing the SLK to carry its new CLA. The CLA is instead based on Mercedes’ somewhat proletarian B-Class architecture, a front-wheel drive model, therefore the latter is driven by the front wheels unless opting for the priciest CLA 45 AMG variant. This hasn’t hindered sales of the popular new model, as should be the case with a production version of the TT Sportback Concept, considering Audi’s tremendous success selling numerous front- and all-wheel drive models.

The very TT being displayed at this week’s Mondial de l’Automobile in Paris rolls on Volkswagen’s new MQB platform that also underpins the new 2015 Golf and many other VW group products, which begs the question: Why not base Audi’s next four-door coupe on the Audi A3 or A4, both of which also use MQB? What you may not know is that Audi has had an A5 Sportback in Europe since 2009, the A5 (also available in Coupe and Cabriolet body styles) of which runs on the same MQB architecture as the A4. It never came here because its thinner than allowable roof wouldn’t pass North American rollover crash tests, and likely being a relatively niche model that wouldn’t amount to significant sales they decided against completely redesigning it just for the brand’s faithful fans on this side of the Atlantic. The good news for us then, is that this new TT Sportback, if indeed put into production, will likely be created for North American consumption too, and while it might not be quite as classy as Europe’s elegant A5 Sportback, it certainly is a lot sportier looking.

If the TT Sportback Concept came to market the way it is, it would be the quickest TT iteration ever offered. The upcoming 2015 TTS Coupe and Roadster (which will likely be 2016 models when they arrive here and are the top trim levels announced so far), make 306 horsepower via Audi’s mighty little 2.0-litre turbocharged four-cylinder, but the TT Sportback Concept features a 400 horsepower version of the same engine. Torque for this show car engine is rated at 332 pound-feet, the combined numbers resulting in a sprint to 100 km/h of just 3.9 seconds. Like the TTS, Audi’s seven-speed S tronic dual-clutch transmission takes care of shifts, while Quattro all-wheel drive makes sure optimal grip is ever-present.

If the TT Sportback makes production it will likely be available with a clean turbo-diesel like its two-door siblings, but who’s to say whether Audi will offer these models’ base front-wheel drivetrain and 227 horsepower four. The 306 horsepower turbocharged 2.0-litre would certainly be made available if not standard, and it’s anyone’s guess if the brand will offer anything close to the 400 horsepower mill under the hood of this concept.

Either way it would go like a rocket. It’s lighter than the A5 Sportback and its competitors too, thanks to extensive lightweight aluminum and composite construction and a fairly small footprint. The new TT Sportback measures just 4.47 metres (14.7 feet) long, 1.89 metres (6.2 feet) wide, and 1.38 metres (4.5 feet) tall, with a wheelbase of 2.63 metres (8.6 feet). That makes it 29 centimetres (11.4 inches) longer than the new 2015 TT Coupe, plus 6 centimetres (2.4 in inches) wider, while riding on a 12-centimetre (4.7-inch) longer wheelbase, although its height is actually 3 centimetres (1.2 inches) lower than the two-door hardtop, which would likely change in production trim. This makes it quite a bit shorter than Mercedes’ CLA, although significantly wider for what should be better handling. The same can be said for BMW’s 4 Series Gran Coupe, which is much larger overall. Audi’s A5 Sportback is yet bigger than either of these two German rivals, so it’s easy to understand why Ingolstadt might want to create the sportier TT Sportback, a vehicle that would be more capable of duking it out (on the road and track at least) with its main competitors.

On that note, if you’re wondering whether the TT Sportback Concept is just whimsy or something Audi is seriously considering, just look at the detail. Its front end looks much like the TT Coupe and Roadster that preceded it, while its mirrors are fully functional production units, as are the only slightly oversized wheels measuring 21 inches and wrapped in 255/30 performance tires. Additionally, the roofline pays total tribute to the TT Coupe, while the taillights are similar to those on the new A3 sedan.

Likewise the interior is pure TT, except for the rear seats that are much more accommodating than the 2+2 setup in the Coupe. That model and this new prototype incorporate Audi’s new digital primary gauge package that the brand calls a “virtual cockpit.” The completely reconfigurable setup lets the driver select a preferred view of the TT’s various functions just by pressing a steering wheel-mounted button. And of course the new TT Sportback will get the same high-quality, well-designed detailing as its Coupe and Roadster brethren if produced, the former achieving Interior Innovation of the Year honours at the recent Automotive Interiors Expo.

The TT Sportback Concept is the latest styling exercise based on the aforementioned TT family, the previous two being the Allroad Shooting Brake Concept that showcased at the North American International Auto Show in Detroit and, more recently, the Offroad Concept that showed up in Beijing. This new model appears to be the most likely to achieve production, which would make for an exciting new sport sedan within Audi’s already impressively stocked ranks, and fully capable of taking on the M-B CLA and even a future 2 Series Gran Coupe.

If you happen to be a performance sedan fan with reasonable means, this is a great time to be alive. Now let’s see if this hot little number makes it to production, and then into a showroom near you.
©(Copyright Canadian Auto Press)
Car Shopping Tools