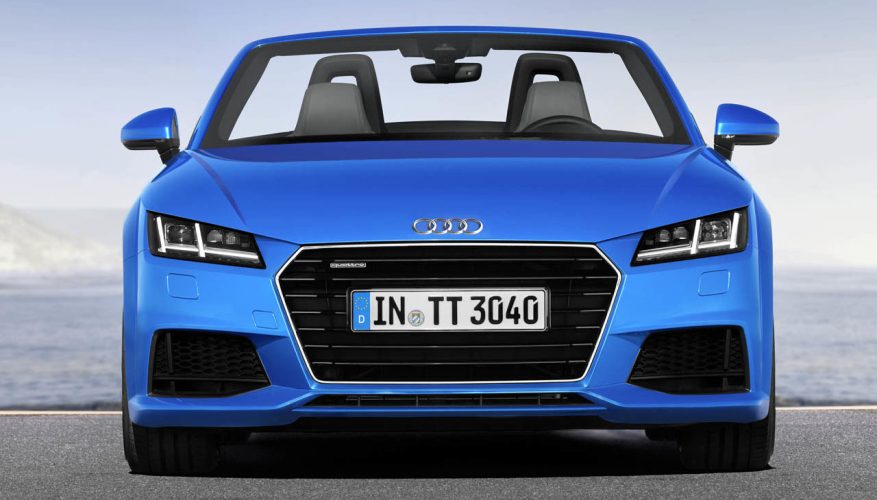 By: Trevor Hofmann
Almost as long as the two-seat TT has been in existence, a drop-top Roadster has been part of its sporty equation. The first arrived in 1999; a year after the groundbreaking Freeman Thomas and Peter Schreyer-designed TT Coupe hit production. The more aggressively penned Walter de’Silva-designed second-generation model is still with us today, but will soon be replaced by the ultimately edgy third-generation TT, a model based on Volkswagen Group’s flexible new MQB platform architecture.

Like the outgoing car, the new model will be available in sporty TT Roadster and sportiest TTS Roadster guises, but unlike many in this class that have eschewed fabric for retractable hardtops, Audi continues to remain loyal to the traditional folding cloth roof. One of the reasons is weight. The new roof mechanism, made from magnesium, aluminum, steel and plastic components, is three kilos lighter than its predecessor’s design, which reduces the car’s centre of gravity for better handling.

The new roof also deploys and retracts faster, taking only 10 seconds to do either job. It can do so at speeds of up to 50 km/h, making for less stress at stoplights. Aiding practicality, the revised roof mechanism allows the top to fold flatter into its recessed compartment to aid cargo capacity in the TT’s trunk, while the cabin is quieter when the roof is raised due to reduced wind noise, the latter attributable to a lower drag coefficient of 0.30; the slipperiest in its segment, says Audi.

The retractable cloth top isn’t the only TT component that’s lighter, incidentally. The entire car has lost weight thanks to more extensive use of aluminum and other lightweight materials, while the new model is also more rigid. Its more solid structure allows for better handling without the necessity to firm up the ride to the point of discomfort, while the benefits of reducing weight should be obvious to all.

Reportedly the new TT Roadster only needs an additional 0.2 seconds to sprint from 0 to 100 km/h over its hardtop Coupe sibling, the drop top TTS taking 4.9 seconds to complete the task compared to the Coupe’s 4.7-second time.

The TTS Roadster uses a 306 horsepower version of Audi’s robust 2.0-litre turbocharged four-cylinder to accomplish its speedy operation, not to mention the inclusion of a standard six-speed dual-clutch automated transmission (DCT) and standard Quattro all-wheel drive. Base TT Roadsters will make due with 227 horsepower fed through a six-speed manual or optional DCT to the front wheels or optional Quattro.

Upping the TTS Roadster’s performance further, it will get the option of a magnetic ride control suspension, while driver selectable mode control will make automatic adjustments to numerous settings, such as throttle response, transmission shifts and suspension set-up.

On the inside, the updated TT will eschew analog for entirely new digital gauges, for what Audi is calling a “virtual cockpit.” The primary instrumentation package, which is reconfigurable, lets the driver select a preferred view of the TT’s various functions, just by pressing a steering wheel-mounted button. As for the rest of the cabin, expect to be impressed by the German company that’s already revered for its high-quality, well-designed interiors. Even before arriving on the market the new TT has taken Interior Innovation of the Year honours at the recent Automotive Interiors Expo.

The 2015 TT Coupe and Roadster will hit the European market soon, with the TTS following next spring. North American-bound cars won’t be arriving this year, however, with their ETA expected sometime next year.
©(Copyright Canadian Auto Press)
Car Shopping Tools