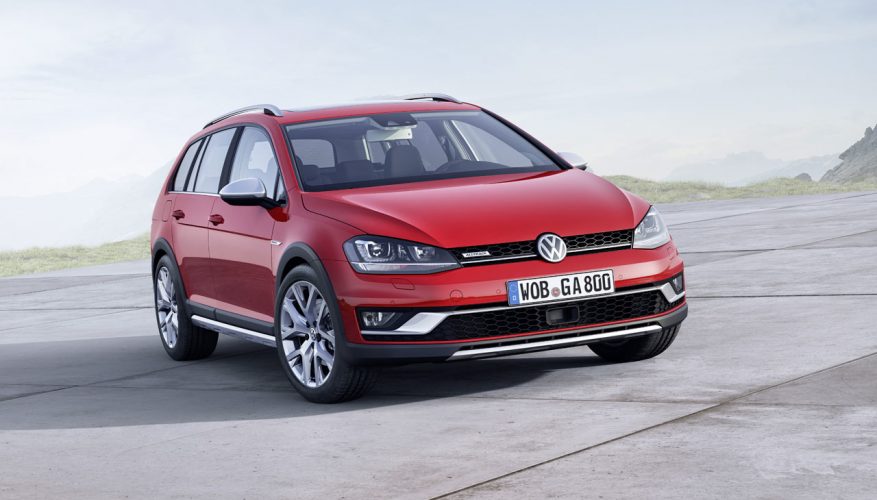 By: Trevor Hofmann
The reality that other markets get vehicles not accessible to Canadians is nothing new to automotive enthusiasts in our part of the world, and if it’s any consolation there are many cars, crossovers, sport utes and trucks available for us to purchase that can’t be had overseas. One of the former is the Passat Alltrack, a jacked up Subaru Outback-style crossover based on the Passat Wagon that’s no longer sold on our shores (our larger American-built Passat sedan isn’t related to any Passat model sold in Europe). Volkswagen has just released photos of a similar car based on the new Golf Wagon, however, which just might make the trek across the Atlantic and into a VW showroom near you.

The reason why the Passat Alltrack won’t be heading here and this Golf Alltrack might is that the latter is based on the Golf Wagon that’s already sold in North America, so Volkswagen doesn’t need to certify an entirely new model in order to make it available to the U.S. and Canadian markets. If the Golf Alltrack indeed shows up on our shores, it would likely become the Golf Wagon’s highest trim level, albeit one that places the model in an altogether different class.

So far, only the aforementioned Japanese-based Subaru offers an off-road style wagon in the compact class, the Impreza-based XV Crosstrek (the Impreza Outback Sport is long gone). Toyota, the originator of the concept with its mid-’80s Tercel 4WD and late-’80s Corolla 4×4 Station Wagon, doesn’t even offer all-wheel drive on its Matrix anymore, while we all should now be aware of what happened to Suzuki’s great little SX4 Crossover ¬– it went down with the ship. If Volkswagen were to offer the Golf Alltrack here, it would be the only true wagon-based all-wheel drive soft-roader in the compact segment, not to mention the only one with a fuel-efficient and torque-rich clean diesel powerplant.

The 2016 Golf Alltrack, which will go on sale in Europe next summer and if offered here would most likely arrive sometime thereafter, likely in the fall of 2015, utilizes Volkswagen’s latest 4Motion all-wheel drive system developed by Sweden’s Haldex. While fully capable in slippery conditions, the advanced system optimizes fuel economy first and foremost, by decoupling power from the rear axle when not required in order to maximize every drop of precious petrol (or diesel). What’s more, the Alltrack incorporates an electronic differential lock for light-duty off-road use, while it can also individually brake inside wheels during aggressive cornering resulting in better handling wet or dry.

For clambering over the rough stuff while looking ruggedly good looking doing so, the Alltrack gets a 19-mm (0.75-inch) lift over the standard Golf Wagon, while the wheel cutouts are filled out and toughened up with tastefully bulging black plastic cladding that also trims out the bottom edge of the car, from its front end, down each rocker panel and then finishing off its backside. VW has added a few Audi Allroad design elements too, such as silver underbody “protection” mouldings, silver mirror housings and anodized roof rails. Inside, nothing much has changed from the regular Golf Wagon according to the press release, except for some modified trim and the addition of Alltrack badging.

In Europe the Golf Alltrack will get four engine options, starting with a 178 horsepower 1.8-litre turbocharged gasoline-fed four-cylinder, which gets followed up with a 109 horsepower 1.6-litre TDI turbocharged diesel, and finally a 2.0-litre TDI in two states of tune, the first with 148 horsepower and the top-line engine boasting 182 horsepower. Of course, the torque ratings of these diesels are more impressive, with the little 1.6 offering 184 lb-ft, the first 2.0-litre delivering 250 lb-ft, and the top-tier 2.0-litre spinning all four tires with 280 lb-ft, while the 1.8-litre gasoline engine puts out a very respectable (amongst gasoline engines) 206 lb-ft of torque. The gasoline and top-line diesel engine come mated to VW’s six-speed dual clutch automated gearbox (DSG) as standard.

If you like what you see, keep your fingers crossed that Volkswagen will offer this unique model here in North America as part of its quest to grow its market share by attracting new buyers that hadn’t previously considered the German brand’s products (it wouldn’t hurt to share this story on social media, drop Volkswagen Canada an email, and talk to your local VW dealer too). No doubt there are disenfranchised SX4 Crossover and Matrix AWD (not to mention Pontiac Vibe AWD) owners out there looking for something similar and new to trade up to, or others who simply like the styling and all-weather functionality of the Golf Alltrack enough to pay what will likely be a healthy premium over the regular Golf Wagon. We’ll keep you posted if we hear any updates.
©(Copyright Canadian Auto Press)
Car Shopping Tools