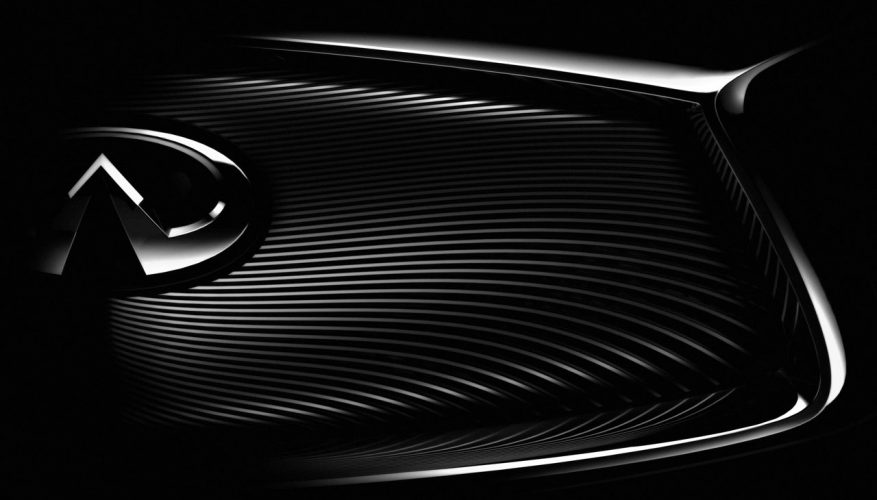 By: Trevor Hofmann
First they showed us part of a new grille, with the next photo being a long, lean and low profile shot, darkened beyond recognition in typical teaser fashion. Now we can clearly see the Q80 Inspiration concept, albeit only from its rear quarters.

This is good enough to depict its segment classification, however, the Q80 Inspiration slotting into the premium four-door coupe class to potentially do battle with the Audi A7, BMW 6 Series Gran Coupe, Mercedes-Benz CLS-Class, and Porsche Panamera. Infiniti categorizes the car in the “premium fastback segment,” new terminology that doesn’t appear to be used by any other manufacturer other than Ford in naming its new 2015 Mustang GT Premium Fastback. They can call it whatever they choose, of course, but “category-breaking,” as the press release states, might be going a bit far.

Then again, where it differs from the aforementioned four-door coupes is size, the Q80 Inspiration a true full-size four-door rather than most of its rivals that ride on mid-size E-segment platform architectures. The Infiniti is even larger than the Panamera, measuring 40 millimetres longer at 5,052 mm and riding on a 200-mm longer wheelbase at 3,103 mm. It’s wider too, at 2,027 mm, although it’s important to keep in mind that this is a concept and not reality, hence its lower overall height of 1,350 mm, oversized 22-inch five-dual-spoke lightweight alloy wheels, rear suicide-style “portal” doors, full-length teardrop-shaped lightweight acoustic glass roof, and complete lack of exterior mirrors.

Just the same the Q80 Inspiration is probably best compared to Porsche’s five-door, mostly because the two share a hatchback design and hybrid-electric powertrains. Infiniti hasn’t gone so far as to announce any specific details about what lies beneath the “progressive” concept’s long hood, but we know it will be a “high-performance and efficient hybrid-electric powertrain.” Additionally, high-tech mechanicals continue outside the engine bay, with an “advanced adaptive suspension” taking care of handling and ride quality.

When considering the Q80 Inspiration for production, no one questions whether or not Infiniti needs a dramatic flagship model in its range. While certain models sell very well, such as the Q50 sport sedan and QX60 seven-occupant crossover SUV, the brand could use something more than smiling Formula 1 star Daniel Ricciardo to boost its image. The new compact Q30 will help to entice younger buyers into the fold, but there needs to be something more aspirational in the lineup than the current Q70 sport-luxury sedan in order to keep its faithful wanting to move up higher through the range.

On that note Infiniti states that the “Q80 Inspiration four-door fastback is to be taken as clear intent to have an entry into the newly defined premium fastback segment,” so we can trust that at some point Infiniti will have a large four-door range-topper in its showrooms, but the press release also stated that the concept was also developed to serve as “a design and technological highlight to which Infiniti’s four worldwide design studios will refer regularly in coming years,” so we’ll just have to wait and see how long the brand plans to merely be satisfied with “clear intent” instead of just building a flagship model.

“After showing Q30 Concept and Q50 Eau Rouge, Infiniti is eager to show the upper range of our portfolio expansion,” commented Infiniti Executive Design Director, Alfonso Albaisa. “In Q80 Inspiration, we wanted to capture that unforgettable feeling when you experience something important, something beautiful, something magnetic for the first time.”

While no photos of the interior are yet available, it should be suitably upscale thanks to Infiniti’s promise of “a highly stylized and personalized ambiance of the highest quality” that will include the use of carbon fibre, aluminum and leather. Also, it won’t be laid out in the traditional 2+3 sedan configuration, but rather an unorthodox “1 + 1 + 1 + 1” seating arrangement. Just what Infiniti means by this odd description is anyone’s guess, but we’re pretty sure it won’t be a four-place tandem setup.

If we don’t receive another image first, we’ll be able to get our first full look at the Q80 Inspiration’s front end design and interior when it debuts at 15:30 local time on October 2 in Hall 5 of the Parc des Expositions de Versailles in Paris. Infiniti has promised to go into more detail about its hybridized powertrain as well as “additional technologies” at that time, so stay tuned for more about this exciting new concept.
©(Copyright Canadian Auto Press)
Car Shopping Tools