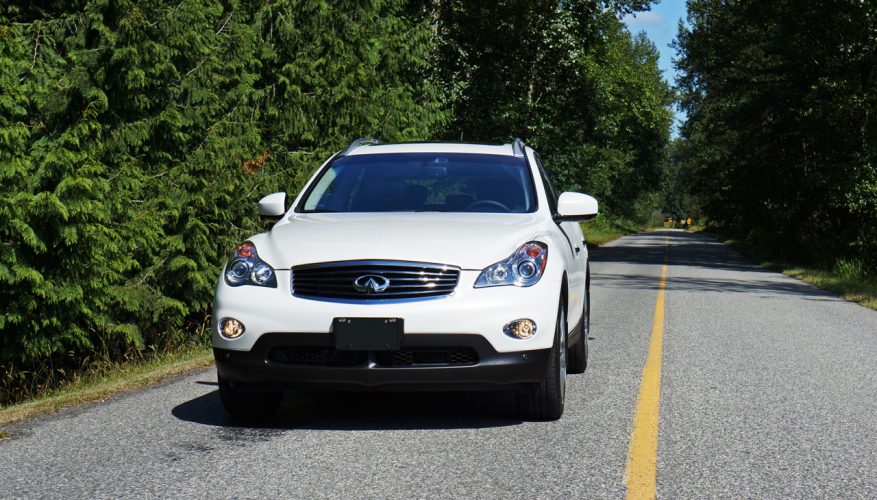 By: Trevor Hofmann
It wasn’t long ago that I tested and reviewed last year’s 2014 Infiniti QX50 luxury crossover, but upon rereading that report I owe you all a big apology. In that review I stated that it was “the best value amongst compact crossovers period.” I was so wrong. As it turns out, the 2015 Infiniti QX50 is an even better value.

That outgoing model was priced at $37,900 in base AWD Journey trim, but now the new 2015 QX50 can be had for a staggering $2,950 less at only $34,950, plus $1,995 for freight and pre-delivery prep of course. The ultimate shocker is that it hasn’t lost many features with the new more affordable price. The only items missing are its auto-dimming rearview mirror, powered tilt and telescopic steering column, maple trim, and powered moonroof, all now optional.

The standard features that remain put its German competitors to shame just the same, starting with proximity sensing Intelligent Key remote access with an illuminated pushbutton ignition, premium leather upholstery, an eight-way powered driver’s seat and four-way powered front passenger seat, both with heatable cushions, powered and heated reverse tilt-down side mirrors with a driver’s side courtesy lamp, Fine Vision electroluminescent primary gauges, a seven-inch infotainment system with an integrated rearview camera, stainless steel front doorsill plates, and of course Infiniti’s trademark analog clock at the centre of the dash. Along with this particularly impressive set of standard features the QX50 also adds the usual list of luxury goodies expected in this class, such as auto up/down powered windows, dual-zone automatic climate control, automatic headlamps, speed-sensitive wipers, a trip computer, driver selectable performance settings including Snow mode, as well as a leather-wrapped shift knob, a leather-wrapped tilt and telescopic steering wheel with illuminated cruise, Bluetooth and audio buttons, the latter that connects through to a six-speaker AM/FM/CD/MP3 audio system with auxiliary and USB inputs plus satellite radio.

Also expected in this premium class is a higher grade of refinement, and in this respect the QX50 has long been a leader, even when wearing its old EX35 nomenclature. The 2015 model continues on with soft-touch surfaces just about everywhere, while Infiniti goes further by adding chrome and brushed metal accents, and very high-quality switchgear. Additionally my tester included the beautiful high-gloss maple accents that were stricken off the standard list for 2015, which now come as part of the optional $3,000 Journey package that also includes the other items Infiniti removed for the new less expensive base model. The look is opulent to say the least, and when fully outfitted with everything else Infiniti loaded into my tester, such as the $2,950 Navigation package with its voice recognition accessible nav system featuring NavTraffic and Bluetooth streaming audio, $4,250 Premium package with its stitched leather hood over the primary instruments, advanced climate control system, fabulous sounding 11-speaker Bose audio upgrade, two-way driver’s seat memory with entry/exit assist, ultra-comfortable driver’s seat powered lumbar support, eight-way powered front passenger’s seat, handy power up-folding second-row seats, impressive Around View monitor with front and rear parking sonar, bright and clear HID headlamps and sweet looking 19-inch alloy wheel upgrade, it’s one pampering ride. My tester also included the $2,500 Technology package that adds a sophisticated intelligent cruise control system with full-speed range, Distance Control Assist (DCA), Blind Spot Warning (BSW), Lane Departure Warning (LDW) and Lane Departure Prevention (LDP), plus Intelligent Brake Assist (IBA) with Forward Collision Warning (FCW).

Something else Infiniti makes standard is a powerful six-cylinder engine, a very expensive option with its competitors. The 24-valve, DOHC, 3.7-litre V6 with continuously variable valve timing and Variable Valve Event and Lift (VVEL) boasts 325 horsepower at 7,000 rpm and 267 lb-ft of torque at 5,200 rpm for plenty of get up and go off the line and impressive passing performance, while its seven-speed automatic transmission is about as sophisticated as modern-day torque-converted gearboxes get thanks to Adaptive Shift Control (ASC) and manual shift mode with Downshift Rev Matching, making you sound and feel like a pro as you row through the gears. Despite its strong performance the QX50’s lightweight design allows for reasonably good fuel economy at 13.7 L/100km in the city and 9.7 on the highway.

That lightweight design makes an even bigger difference when the road starts to wind. Slip the shifter over to manual mode and get ready for some fun as the QX50 transforms from comfortable cruiser to canyon carving sport wagon. Truly, there are few in its compact/midsize premium segment that can keep up, the QX50 exhilarating when pushed toward its very ample limits.

One of the reasons the QX50 holds its line so well is standard Intelligent all-wheel drive that keeps 100-percent of the engine’s torque at the rear wheels when no front-wheel slip is detected, leaving the CUV’s front wheels free to do what they do best, steer. When the road gets slippery the system diverts up to 50-percent of that torque forward for added grip. Of course, the QX50’s fully independent double-wishbone front, multi-link rear suspension setup silently and effectively goes about its handling and ride responsibilities too, while the optional 245/45R19 tires on my tester certainly didn’t hamper adherence issues, although I’ve driven base QX50s and they snake through corners superbly as well.

If the QX50 weren’t already a practical five-occupant crossover SUV you’d think I was talking about a sports coupe, but it offers loads of passenger room front to rear, with easy access to the back via rear doors that open up to 80 degrees, plus ample cargo space for most peoples’ needs at 526 litres behind the 60/40 split-folding rear seatbacks and 1,342 litres when both sides are laid flat.