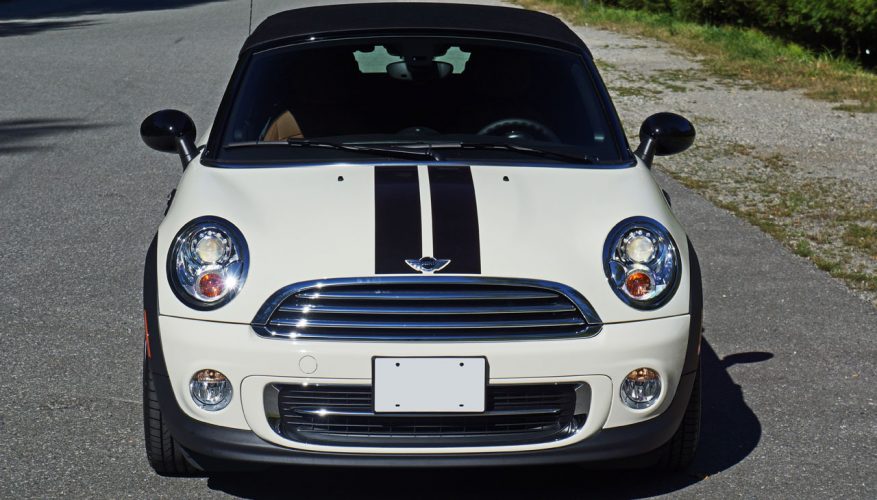 By: Trevor Hofmann
When was the last time you slid behind the steering wheel of your car, started up the engine, dropped the top, put it into gear, and giggled mischievously as you drove away?

If you’re like most car owners, your daily ride is more about shuttling from A to B than hanging it all out on a sweet set of S curves. It’s ok. Even we auto scribes spend most weeks behind the wheel of regular cars for regular folks, so we understand completely. Just the same, wouldn’t it be nice to buy yourself something totally frivolous? And I don’t mean going wild on a double ristretto venti half soy nonfat decaf organic chocolate brownie iced vanilla double shot gingerbread Frappuccino. No, I’m talking about some real serious fun. Isn’t it time for a grin-inducing, sun-seeking, three’s-a-crowd, two-seat roadster from the company that doesn’t know how to make boring cars at all? That company is Mini, and the car is the long and lean looking, low-slung Cooper Roadster.

It’s easy to fall in love with any Mini, from the original two-door hatch to the elongated Clubman with its cool Dutch-oven rear doors, or the new Countryman crossover, they’re all practical little runabouts that deliver as much individual style as they do wallet-friendly economy. The Cooper Roadster is a new kind of Mini, mind you. Like the two-door Mini Cooper Coupe, the Roadster forgoes rear-seat pragmatism for true empty-nester values. Whether you haven’t burdened yourself with young’uns yet, your kids are long gone, you and your partner have chosen a more peaceful existence without such challenges, or you have the wherewithal to own more than one four-wheel appliance and you want the second one to help keep the romance with each other and life alive, the Mini Roadster might just be ideal.

My partner and I were particularly blessed to have an azure sky overhead and relative warmth in the September air while testing the Cooper Roadster, perfect for combining some heat on the brow with a little wind in the hair. We stowed all our gear in the Roadster’s 240-litre trunk, surprisingly 80 litres larger than the Mini Cooper Convertible’s abbreviated boot, and sunk into the tiny cars spacious interior.

That’s one thing I love about Minis. Unless you’re particularly huge, there’s probably enough room inside any Mini to accommodate you. The image of a lanky six-foot-five (1.96-m) John Cleese clambering into his late ’60s-era Austin 1100 MkI Countryman Estate might cause a smirk as it comes to mind, and while these original Minis were ridiculously roomy for their outward measurements, the British brand’s new lineup is made up of even larger and more spacious models. The Cooper Roadster has the added benefit of no rear seats, so you can stretch out a little bit more thanks to the car’s wheelbase and overall length being identical to the four-seat Cooper Convertible. That’s why its trunk is larger too, and why it looks so sporty when side-by-side with its more upright sibling. Specifically the Roadster gets a more steeply raked windshield, a 30-mm lower roofline and a more windswept rear profile for that long and lean look I mentioned earlier.

Heading out on the road, something white and black popped into my rearview mirror, making me think I’d left the trunk open. Not so, as this little sportster comes equipped with a standard pop-up rear spoiler that extends at 80 km/h – eat your heart out MX-5 Miata, this little Mini is playing in Porsche Boxster territory. Panic quickly replaced with pleasantries, the lightweight roadster sprinted down the highway like it was eager for a day’s play in the park.

Before you remind me that the standard 2014 Mini doesn’t exactly push out supercar performance numbers, let I remind you that it doesn’t take a lot of cute little Shetland ponies to pull a 1,195-kilo car. My six-speed automatic-equipped tester weighed slightly more at 1,230 kgs, but I’m sure you get my point. The Roadster weighs only slightly less than the Cooper Convertible, so if you’ve driven the latter you can expect approximately the same off-the-line performance from the former – Mini quotes 9.6 seconds to 100 km/h.

Behind that impertinent looking grille is Mini’s 1.6-litre inline four-cylinder engine, good for 121 horsepower and 114 lb-ft of torque, which is again ample for the job at hand. If you want more, a Cooper S Roadster can be had with direct-injection and a twin-scroll turbocharger resulting in 181 horsepower and up to 192 lb-ft of torque on overboost, or you can go all the way with a John Cooper Works (JCW) Roadster that makes a heady 208 horsepower and maximum of 207 lb-ft of torque. Can you imagine the trouble Basil Fawlty would’ve gotten himself into with this little number? He would have deserved “a good thrashing” instead of the Austin, but I digress.

While I never say no to more power, there’s something truly fun about being able to legally get the most out of the power you have. The base Roadster’s mill needs a thorough wringing out to exact maximum thrust, and thankfully for only $100 more even this car’s entry-level powertrain can be had with a set of paddles on a sport steering wheel for upping revs to redline, when the optional autobox is ordered that is. I’d be sorely tempted to purchase the six-speed manual if this were my ride, however, because Mini knows a thing or two about short-throw DIY shifters and even more can be coaxed out of the engine when so infused, but either way this is a brilliantly fun car to drive.

As mentioned, acceleration isn’t the Roadster’s topmost dynamic, unless we’re talking lateral acceleration. Bend the little two-seater into a corner and you’ll quickly learn there are few cars that will be able to keep up, even ones with a lot more power on tap. The Mini advantage is its ability to maintain momentum through a corner, allowing the power that’s there to carry the speed on exit. If you like the feel of a well sorted front-drive suspension set-up, this little Mini Roadster is about as good as it gets.

Again, if you want better you can opt for the S or the JCW, both of which up wheel and tire size plus spring and damper rates, but generally the substance of each car is the same. A Mini’s short wheelbase, use of lightweight premium-level materials and taut body structure makes for a strong, rigid convertible that’s rattle free, even over bumpy railroad ties and other road irregularities. The rigidity makes for a safe car too, at least as safe as cloth covered ragtops can be.

Mini incorporates a set of roll hoops behind the driver and passenger’s headrests, while the reinforced windshield frame acts as another roll bar, so as long as you’re securely locked into the seatbelts you’ll be kept as safe as possible even if a rollover occurs, at which point a crash sensor would shut off the fuel flow, turn the lights on and unlock the doors while Mini’s telematics system would automatically call for emergency help and alert the authorities of the situation. Of course, as part of the passive safety system a full suite of airbags is standard, while active safety solutions include dynamic traction control and dynamic stability control, plus ABS-enhanced four-wheel discs with brake assist and Cornering Brake Control to make sure that accident never happens in the first place.

But let’s change the subject, as it’s much more fun to talk about sport, comfort and convenience when contemplating a car of the Roadster’s pedigree. To that end let me fill you in on a short list of standard goodies. For its base price of $28,900 plus $2,295 for freight and pre-delivery prep you’ll get pushbutton ignition, tilt and telescopic steering, a leather-wrapped multi-function steering wheel with cruise control, power windows with one-touch up/down, heated power remote mirrors, automatic climate control, an AM/FM/CD/MP3 audio system with high-definition radio, USB and aux plugs plus Bluetooth hands-free, an on-board computer, carbon-black leatherette upholstery (that really looks like leather), multiple-colour ambient lighting, a manually operated black cloth soft-top, a wind deflector, 16-inch twin-spoke light alloy wheels on 195/55R16 run-flat all-season tires, bi-Xenon HID headlights, headlight washers, cool looking white turn signal lenses, classic chrome door handles, and a handy tailgate with the load-bearing weight of 80 kilos.

My tester wasn’t totally stripped naked mind you, but rather Mini had outfitted it with a number of packages and standalone features for a real premium look and feel. First off, the roof was semi-powered, which is a standalone option costing $750. Next was $2,000 worth of Toffee Lounge Leather for an ultra-luxe appearance inside. My car also included the $500 Style Package complete with additional chrome detailing inside and out, as well as gloss piano black interior trim. A $2,100 Premium Package was also included that adds a great sounding Harmon/Kardon sound system, an auto-dimming rearview mirror, a side mirror package, automatic rain-sensing wipers, heated seats, a centre armrest, rear parking sonar that’s much appreciated when the top is lowered and rear vision is reduced, plus front and rear fog lights. Additionally, a $1,850 Wired Package featured USB and Bluetooth streaming audio, smartphone integration, voice recognition, Mini Connected (which is one of the best infotainment systems on the market, especially if you’re pairing up an iPhone), and a navigation system, all integrated within the dinner plate-sized central speedometer pod, the needle of which circles around the outside of the infotainment display – it’s like nothing you’ve likely ever seen before. Yet more, Mini included a $990 Sport Package with sport seats and a set of 17-inch Black Star Bullet alloys wrapped in 205/45R17 Bridgestone Potenza rubber – alternatively you can opt for the same tires circling around 17-inch Conical Spoke rims. Standalone items included proximity sensing Comfort Access at $390; the aforementioned sport steering wheel with paddles at $100; and lastly, the automatic gearbox at $1,200. Additional options and a special Mini Yours Package is available too, but I’ll let you discover these on your own.

While I felt like I was reenacting Robert Wagner playing Jonathan Hart next to my gorgeous sweetheart as we traveled down the road in our mini Corniche Convertible, I certainly wasn’t guzzling fuel at the rate of a 6.8-litre turbocharged V8. Rather, the Cooper Roadster is rated at a very thrifty 7.4 L/100km city, 5.7 highway and 6.6 combined with the manual or 7.6 city, 5.6 highway and 6.7 combined with the as-tested automatic, making it anything but a frivolous commuter. Rather, the Cooper Roadster is as affordable to operate, as it is to purchase.

At the end of my drive, Mini’s Roadster had me asking myself how much I truly value the time I’ve been given. Ask yourself the same question. Must we merely endure our daily commutes and errand runs, or do we want to savour every moment behind the wheel? The Mini Cooper Roadster was designed for those who embrace life to the fullest. That a car so special can be afforded by so many makes this little two-seater particularly wonderful.
©(Copyright Canadian Auto Press)
Car Shopping Tools