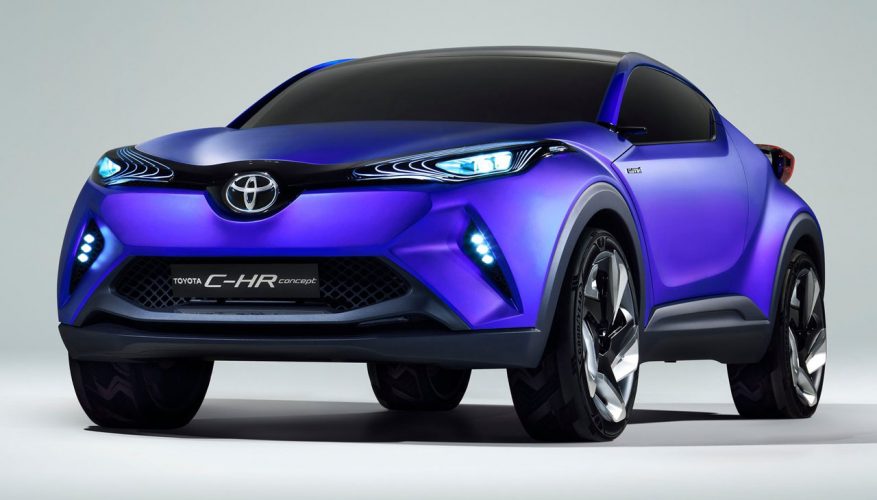 By: Trevor Hofmann
If you thought for a moment that every possible vehicle niche has been filled, think again. We’ve yet to even imagine what the many think tanks within the various automakers are busy creating, but one thing we can be sure of is they’re on a never-ending quest to come up with the next big (or small) thing.

The world’s largest automaker is no exception, of course, its latest creation due on the Paris auto show stage in only a couple of weeks. That vehicle has been designed to fill a crossover niche normally exclusive to the premium sector; a combination sports coupe and crossover SUV, or so it appears.

The only images we have include a mysteriously darkened teaser photo of the CUV’s side profile purposely revealed by the Japanese brand late last week, plus more recently a couple of additional shots of the front and overhead rear have leaked onto the interweb.

While we can’t be specific about the new concept’s size, the C-HR looks to be compact in dimension, with its closest potential competitor being the ultimately unique Nissan Juke. The C-HR, however, incorporates a two-door liftback design that’s longer, lower and sportier looking overall than the more upright five-door Juke, although it’s possible the hidden passenger side of the vehicle integrates an additional side door like the Hyundai Veloster.

If the concept actually becomes reality we can probably expect it to wear a Scion badge here in North America, as that brand does very well in the two sport coupe segments it competes in with its tC and FR-S, so a jacked up sport coupe might be just the ticket to attract yet more attention to the youth-oriented brand.

The concept boasts a Toyota Hybrid Synergy Drive powertrain, although the automaker isn’t getting specific about its details just yet. All Toyota had to say when they released the sole teaser image was that the C-HR represented an “innovative vision for a compact crossover model” featuring “a new design language with an engaging driving experience and a hybrid powertrain.”