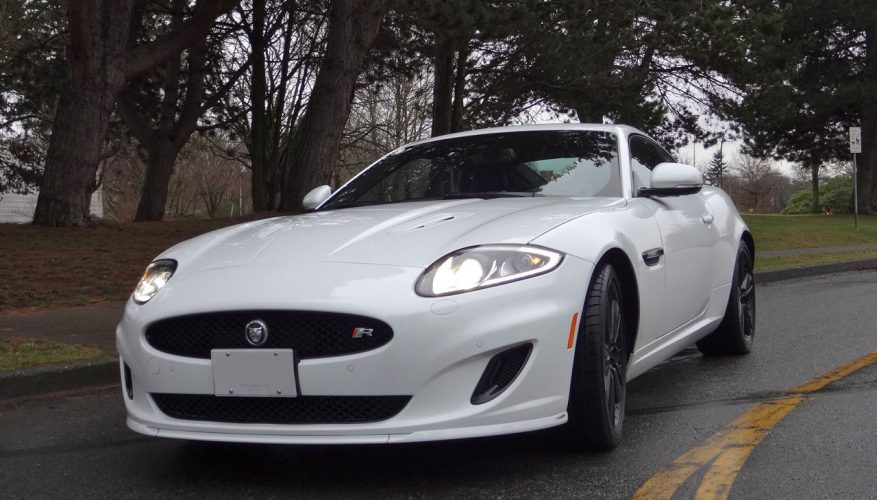 By: Simon Hill
In no particular order, here are some fun facts about the 2015 Jaguar XKR: It’s gorgeous in a sensual and curvaceous kind of way; the start/stop button pulses red with a heartbeat-like double flash when you unlock the doors and climb in; the supercharged V8 pushes enough power to the rear wheels that with the traction control turned off it’ll smoke the tires and step the tail out with glee; and everyone else on the road drives too slowly when you’re behind the wheel.

Now here’s a sad fact about the 2015 Jaguar XKR: It’s the last of its line, with Jaguar discontinuing the model at the end of the model year in the face of increasing sales pressure from the smaller, cheaper F-Type, and a pressing need to free up production capacity for the company’s upcoming XE small sedan.

The Jaguar XK first stormed onto the scene back in 1996 (essentially replacing the XJS), and a second-generation version debuted in 2007. It has changed little since than, and that’s just fine as it represents the very essence of a grand tourer and has a timeless style that I reckon will be sought after in years to come, much as the classic E-Type is today. By comparison, the new F-Type is a perfectly fine looking car, but lacks the XK’s presence. My test car was fitted with Jaguar’s $4,700 Black Pack exterior package, giving it a more aggressive look with a black grille, black window surrounds and 20-inch Takoba Gloss Black alloy wheels.

Under the hood, the XKR packs a supercharged V8 that cranks out a whopping 510 horsepower, a thunderous 461 lb-ft of torque, and a heart stirring, growling exhaust note under full throttle. The engine is hooked up to a quick-shifting six-speed ZF automatic transmission (with paddle shifters, naturally) and can launch the XKR from standstill to 100 km/h in 4.8 seconds. A switch on the console lets you select dynamic mode, which dials in quicker throttle response and more aggressive shift programming. Fuel economy, for those potential buyers interested in such matters, is rated at 13.9 / 9.2 L/100km city/highway, but you’ll use considerably more if you dip frequently into the throttle.

The suspension is well sorted, with quick, communicative steering and adaptive dampers that assess and respond to body motion, steering inputs and road conditions in order to provide the comfortable ride expected of a grand tourer while still offering reasonably sharp handling. It’s certainly good fun to drive, tossable and lively, and it helps in this regard that the XKR is built almost entirely of aluminum, which keeps weight down considerably compared to most of its competitors. The Jaguar XKR isn’t exactly a featherweight, but it tips the scale at only 1,751 kilograms (3,860 pounds) compared to 1,924 kg (4,243 lbs) for a BMW M6, and this makes a big difference in seat-of-the-pants feel – the XKR simply feels much nimbler and light on its feet.

If the engaging handling might have you forgetting that the XKR is in fact a grand tourer rather than a true sports car, the sumptuously luxurious interior quickly reminds you of the car’s primary mission. Rich leather upholstery is standard, as is dual-zone climate control, 10-way heated and ventilated power seats, a power tilt and telescopic heated steering wheel, a seven-inch touchscreen infotainment system with navigation, and much more. The materials are all befitting of a premium grand tourer, with soft-coated switches, smooth chrome detailing, piano black trim around the centre stack, and a choice of wood veneer or piano black dash inserts. There’s even an option for a leather headliner, if that’s your thing. I found the touch-screen infotainment system reasonably intuitive to use, which is important given that using it is necessary for many functions that would traditionally require separate switches, such as controlling the seat heating and cooling.

It should also be pointed out that while the XKR bills itself as a 2+2, it is for all practical purposes in fact a two-seater: the deeply scooped rear seats do an excellent job of holding parcels in place while you toss the car around corners, but at a reasonably skinny five-foot-eleven I was entirely unable to cram myself in back there. It would be unfair to say the rear seats are entirely without merit – my colleague was indeed able to transport his young son in the back – but they are seriously cramped.

With starting price of $110,475 (including the $1,350 destination fee) the Jaguar XKR competes against a range of competing grand tourers and sports cars including the BMW 6 Series, Mercedes-Benz SL-Class, Maserati GranTurismo, Porsche 911 and even Jaguar’s own F-Type. What makes the XKR stand out beyond its generous level of appointments in standard trim, is its soul-stirring supercharged powertrain and its quintessential British style. With only one more year on the market, if the XKR’s combination of elegant styling and breathtaking performance is your cup of tea, now is the time to snap one up.