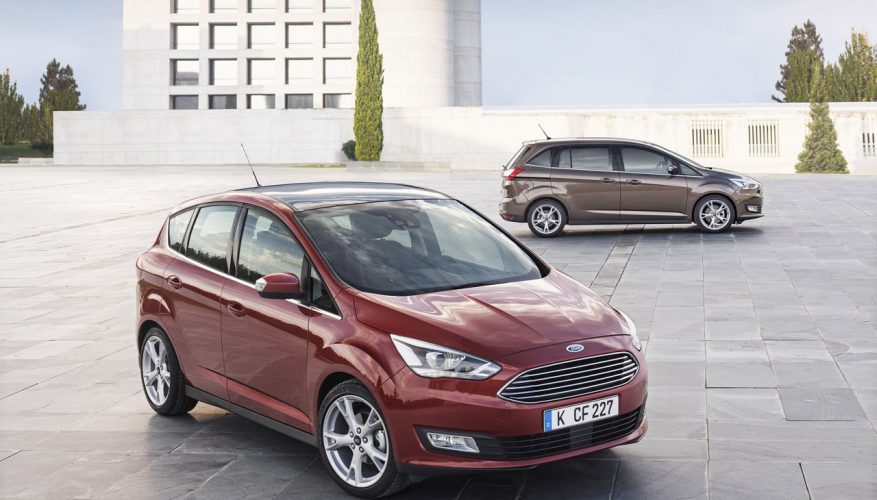 By: Trevor Hofmann
Although Ford’s C-Max isn’t a household name like Toyota’s Prius, it should be. The compact family hauler is big on space, nice to drive and filled with top-tier features, while like the Prius it’s only available as a hybrid electric vehicle or advanced plug-in hybrid, the latter dubbed C-Max Energi.

This last point is only true here in North America however, because in other markets the C-Max can be had in conventional gasoline as well as diesel power, one of which is likely how the all-new model will debut in Paris early next month.

The C-Max is based on the popular Ford Focus, which is available as a five-door hatchback and four-door sedan here in North America, or in hatch and five-door wagon form in Europe. Unlike the Focus, the C-Max has a taller ride height for more of a crossover/mini-minivan (MPV) feel, while Ford of Europe extends the range further with a longer seven-passenger Grand C-Max version.

According to Ford, the model set to debut in Paris won’t be entirely new, but rather “an extreme makeover.” We knew this late last week when the automaker released a teaser image only showing a hint of what was to come, and while the partially lifted veil revealed some of its new lower fascia design, new full images have since been released showing the entire car from front to back.

First off, it’s important to note that the C-Max we see here is a European model, so it’s entirely possible Ford will modify it before coming here to North America. Then again, with the automaker’s new global design strategy, any market-specific changes will be subtle if noticeable at all.

For what it’s worth, the new Euro-spec model gets a redesigned front fascia that moves its Aston Martin inspired grille a little higher and more appropriately between each revised headlamp, the old upper grille with its bisected blue-oval logo removed entirely. Now that logo sits at the leading edge of the re-sculpted hood, while the new LED DRL-enhanced headlights don’t droop down as much, looking altogether more appealing. A new lower grille spans the width of the car, bookended at each side with a set of rectangular fog lamps. The overall appearance from up front is cleaner and tidier, and dare we say sportier than the old model.

Ford has chosen to clean up the rear end similarly, with a simpler new tailgate design incorporating reshaped taillights that continue to wrap around the body similarly to the outgoing model. A new rear bumper once again appears less cluttered, for better visual flow from the rear fenders. New colour choices will join updated alloy wheel designs to complete the exterior refresh.

Inside, the basic layout of the dash remains the same, although Ford has updated the primary instrument binnacle to incorporate a sportier set of circular hooded main gauges compared to the current unified design. The infotainment system, which looks much the same at first glance, is actually Ford’s new Sync 2 configuration that initially debuted with the updated Focus. The revised system replaces some physical buttons with more touchscreen controls, reducing dashboard clutter.

Ford says that higher-grade materials have been used throughout the interior too, although it should be noted that the current model is already much more refined inside than many of its competitors. Features added to the top-line Euro-spec model that should also be available here include a heated steering wheel, doorsill scuff plates, as well as handy load-net fitting points behind the front- and second-row seats.

Aiding refinement, Ford has installed thicker side glass plus more absorbent seals around the rearview mirror and tailgate to reduce wind noise, while the engine bay’s heat shield has been filled with an acoustic damping material in order to further reduce NVH levels.

The new model should also ride and handle better thanks to revised steering and suspension setups, while forward visibility will no doubt improve at night when optional bi-xenon HID headlamps incorporating an Adaptive Front Lighting system are ordered.

Again, while some of these features and styling updates may not be identical to our North American C-Max, the differences between our markets should be minimal at most. So far, Ford has mentioned nothing about a seven-occupant Grand C-Max being offered here as it is in Europe, or any additional powertrain choices, therefore stay tuned for more North American market-specific updates when our local model appears at an upcoming U.S. auto show.