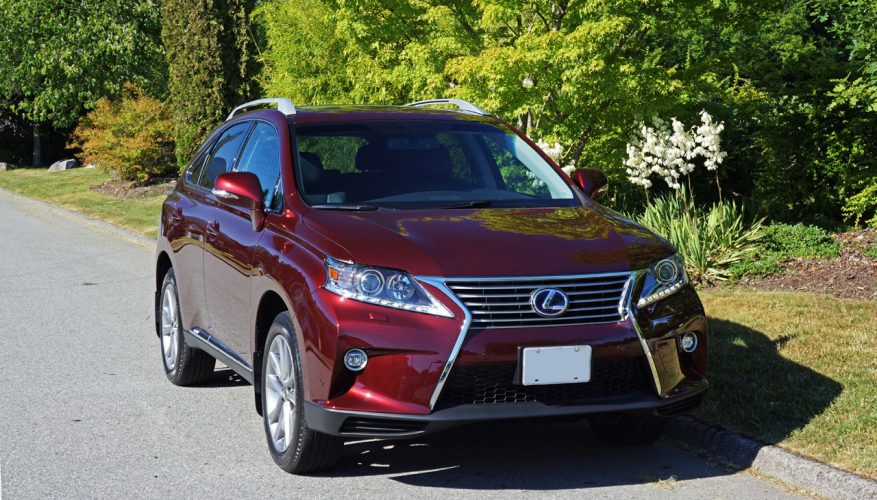 By: Trevor Hofmann
Once upon a time, the only luxury crossover SUV available with an efficient hybrid-electric drivetrain was the Lexus RX. Now, 10 years later, many premium brands offer hybridized CUVs. While the RX remains the leader, Lexus is fully aware that they can’t rest on their laurels while competitors play catch up, reason enough for introducing numerous upgrades with their 2015 RX 450h SportDesign.

Like the conventionally powered RX 350, the RX 450h benefits from a refreshed front fascia, keeping this latest iteration’s styling fresh two years after the mid-cycle upgrade it received for the 2013 model year, when Lexus added its now trademark spindle grille. The unique design works as well on the RX as it does with other vehicles in the Toyota-owned luxury brand’s lineup, the model’s continued sales success proof of its general acceptance amongst RX fans.

Lexus manages to capture a certain windswept sportiness with the latest RX design, the bold grille and chiseled lower fascia adding more aggression than any version before, its smooth surfaces and raked rear D-pillars giving it a “moving while standing still” appearance that’s been part of the RX look since its second generation, and big 235/55R19s on bright finished twin-five-spoke 19-inch rims adding a hunkered down business-first attitude, while somehow its styling doesn’t deviate one iota from its primary goal of elegant luxury. There’s ample chrome and polished nickel brightwork to make it sparkle in the sun, or the rain, while my test model’s gorgeous coat of Claret Mica paint looked positively rich.

That’s the feeling you get inside, too. Again, classic luxury design elements play a major role in creating a sense of wealth. My tester’s cabin was filled with lots of perforated leather, glossy woods (bird’s eye maple in a cool dark gray tone no less), brushed and bright metals, and of course high-grade soft-touch plastics most everywhere you’re likely to touch, and even some places that would require quite a stretch to reach. Along with this conventional approach to luxury, the RX incorporates uniquely modern cuts and curves, particularly across the centre stack that’s mostly surfaced in brushed aluminum. Integrated within, Lexus’ state-of-the-art infotainment system is actuated via an award-winning Remote Touch haptic controller, which works in a similar style to a computer mouse for an easy and intuitive user experience without the need to take your eyes off the road to operate. Its haptic response system “locks in” a given “button” by feel, again minimizing the need to look over at the controller or screen to execute a command. Truly, it’s one of the best human/machine interfaces in the business, although just one of many advanced yet user-friendly electronic systems within the RX.

Along with the above-mentioned blind spot monitoring, like all RX models the 450h includes 10 airbags, a rigid yet crumple-zone-integrated body shell designed to deflect and/or absorb a crash in just the right way to protect every occupant from injury as much as possible, ABS-enhanced four-wheel disc brakes with electronic brake force distribution and emergency brake assist plus quick-responding LED brake lights for enhanced rear-end crash avoidance, vehicle stability control (the ultimate hand of god intervention technology – if you’ve ever felt it in action you’ll know exactly what I’m talking about), and an anti-theft system.

While safety items are critical in a family vehicle, something most won’t consider when opting for a luxury hybrid is upgraded performance. That’s right, the RX 450h sends more output down to the wheels than its conventionally powered sibling. Where the RX 350 hits the ground running with an already enjoyable 270 horsepower and 248 lb-ft of torque, with power routed to all four wheels via a base six-speed or optional eight-speed automatic transmission, the RX 450h uses an identical 3.5-litre displacement V6 (albeit a more efficient Atkinson-cycle design) together with three electric motor-generators (a 123-kW one as the drive motor, a second 116-kW unit acting as the starter while also powering electrical equipment and recharging the battery pack, plus a third 50-kW motor-generator mounted in the rear as part of the cleverly named All-Weather Drive system, utilized when the front wheels slip) and a 288-volt nickel-metal hydride (Ni-MH) motive battery for 295 combined system horsepower and “substantial torque at all speeds,” says Lexus. I attest, as the RX 450h gets up and goes quickly, helped along by a smooth as silk continuously variable transmission (CVT) that keeps the power in its sweet spot continuously, or if you prefer can be shifted manually via the shift lever.

The drivetrain isn’t the electrified RX’s only smooth character trait, its suspension is “so amazingly smooth,” or so say my test notes, while the cabin is “ultimately quiet.” This information will be nothing new to Lexus owners, but rather these are just some of the many reasons they keep coming back again and again, resulting in the RX’s yearly best-selling luxury crossover SUV status. The CUV’s undercarriage and body shell does more than merely isolate road harshness plus wind and exterior noise from its occupants, mind you. It manages corners with impressive ability too, while delivering taut and stable high-speed cruising in supreme comfort, no matter the duration of the journey.

Part of the RX comfort experience is overall roominess. First off, Lexus hasn’t tried to squeeze a third row into a vehicle that was never meant for more than five occupants, like some of its rivals. Front seat headroom, plus shoulder, hip, knee and legroom is plentiful, whereas as the rear outboard seats are even more spacious while allowing fore and aft movement as well as recline. Even the middle seat is more comfortable than most competitors’ centre perches, thanks to 40/20/40 split seatbacks, which are even more useful when laid flat for loading in longer cargo, such as skis. With a 60/40 split, two rear occupants are forced to the larger “60” side, while skis are slotted through the narrower “40” folded portion, but with a 40/20/40 set-up the skis or other long items can be placed down the middle with both rear passengers getting the more comfortable window seats. And incidentally, opting for the hybrid doesn’t negate the RX’s load hauling ability, with both models capable of 1,132 litres of gear behind the rear seats or 2,273 litres when the entire rear row is tumbled forward. Likewise, all RX models get a tow rating of 1,587 kilos (3,500 lbs), normal for this class.

Now that I’m talking practicalities, one of the key reasons for choosing the 450h over the standard RX is fuel economy. Where the base RX gets an already impressive 13.3 L/100km city, 9.8 highway and 11.7 combined rating under the new more realistic Transport Canada five-cycle system, and the mid-grade Sport achieves slightly better numbers at an estimated 12.7 city, 9.1 highway and 11.1 combined due to its eight-speed automatic, the top-line RX 450h puts a lot of compacts to shame with its 8.0 L/100km city, 8.5 highway and 8.2 combined rating. Likewise, while the conventionally powered RX 350 makes do with a very acceptable Tier 2 Bin 5 emissions rating, the RX 450h gets a Tier 2 Bin 3 (ULEV II) rating, or in California-speak it’s a Super Ultra Low Emission Vehicle (SULEV), and while that might not put money in your bank account like its lack of thirst for fuel, it certainly makes the air around your SUV cleaner to breathe.

Some technologies included in the RX 450h that aid fuel economy while reducing emissions are idle-stop, which automatically shuts off the engine when it would otherwise be idling, regenerative braking that harnesses the static energy created by friction during braking and puts it back into use, a Cooled Exhaust Gas Recirculation (EGR) system that you’ll never see, hear or know is doing anything to help further the efficiency cause, plus a number of driver selectable settings as part of Lexus’ Drive Mode Select system that can either force the 450h into EV Mode, where it will run for short periods at low speeds under complete electric power, ECO Mode where it reduces air conditioning output and retards throttle response amongst other efficiency measures to minimize fuel usage, Hybrid SNOW Mode for inclement weather conditions, or Sport Mode that really makes a difference when taking off from standstill, passing on the highway or just plain letting your hair down and blasting off a little electron-charged energy.

While my 450h SportDesign was a base model with an as-tested price of $62,650 plus $1,995 for freight and pre-delivery prep, I experienced some of its optional features in an RX 350 I tested previously. The Technology Package, for instance, pushes the RX 450h price up to $67,600 plus freight and adds illuminated front doorsill trim, premium leather upholstery, unique woodgrain trim, heads-up display, front-seat powered thigh support, a handy 120-volt/400-watt power outlet, LED headlamps, and the pièce de résistance, a wonderful sounding 15-speaker Mark Levinson surround sound audio system with 7.1-channel speaker architecture. The Executive Package, which ups the price to $70,350 plus freight, simply adds a dual-display rear entertainment system – you’d better get 2,750 bow down and thank yous from your kids for that one.

You can just thank yourself for all of the RX hybrid’s other attributes, as it’s a luxury crossover that will keep paying dividends long after the date of purchase. The upgraded 2015 RX 450h is not only a good looking, quick performing, extremely comfortable, well appointed and intelligently designed luxury CUV, but it’s also fabulously fuel friendly while endowed with Lexus’ legendary dependability. Need I say more? I didn’t think so.
©(Copyright Canadian Auto Press)
Car Shopping Tools