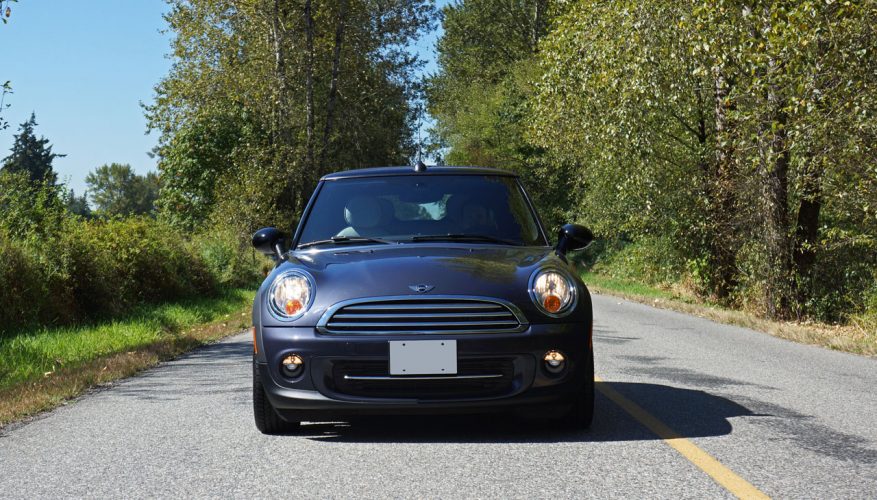 By: Trevor Hofmann
What’s one of the best ways to lap up the final rays of sunshine left over from what has been a particularly warm and beautiful Indian summer? Spending time at the wheel of a convertible, of course. Such was the case on a perfectly sunny afternoon last week, the sun warming our bones and a crisp wind whooshing through our hair, my partner and I strapped into a very stylish and ultimately fun-loving 2014 Mini Cooper Convertible.

If you’ve been paying attention to Mini news and reviews as of late, you’ll already know that a completely redesigned 2015 Mini Cooper Hardtop has been flaunting itself at all the trendiest locations in the country. I’ve driven and reviewed it, and can attest to its many improvements. Just the same, time spent in the older model, which will be with us in drop-top form for another year, reminded me of just how good it is, and how much I love its impish, feisty and altogether more assertive styling.

Let’s face it, the majority of us choose styling before most other attributes when buying a new car. It’s what causes us to pull into the dealership in the first place. Good design elicits an emotional response that begins visually and soon invades our entire sensory system, especially if we already have associated experiences with the car in question. For me, every moment spent in a Mini has been enjoyable. Even stuck in traffic the car seems to put a smile on my face. I’m sure you can imagine just how wide that grin gets when I’ve been able to open one up on an unpopulated back road.

I took just this opportunity while piloting the Cooper Convertible, a nice and smooth two-lane stretch before me with ample bends, curves and undulations, an ideal bit of roadway for testing out this Mini’s perfectly balanced driving dynamics. Its short, stubby dimensions mean that cowl shake and structural shimmies aren’t an issue, such problems left to longer wheelbase ragtops. The Cooper Convertible is tight like a little drum, critically important for weaving through serpentine ribbons of tarmac with unbridled enthusiasm. With a fun factor of eight out of 10 (we’ll leave nine for the Cooper S Convertible and 10 for the JCW), the Cooper’s base 1.6-litre four doesn’t put out big numbers, but its 121 horsepower and 114 lb-ft of torque are nevertheless sufficient for a good time behind the wheel. After all, the Cooper Convertible is a subcompact model weighing only 1,225 kilos (2,700 lbs) with the six-speed manual or 1,260 (2,778) with the as-tested six-speed auto, so it’s not as if the wee little motor is pulling an Airstream camp trailer along for the ride. With autobox-equipped models, Mini provides manual shifting via the gear lever, so rowing through the cogs is possible and helpful during quick turning maneuvers at speed, or alternatively useful for short shifting in order to save fuel.

Yes, the Cooper Convertible is thrifty, as one might expect. Factor in that it fits four real people aboard plus a tidy 170 litres of luggage in its trunk, or alternatively expanded cargo capacity of up to 660 litres via its 50/50 split-folding rear seatbacks, and its 7.4 city, 5.7 highway and 6.6 combined rating makes for a particularly efficient package. The auto-equipped model I was driving only loses a fraction to the manual, with a rating of 7.6 city, 5.6 highway and 6.7 combined, so don’t lose any sleep reworking your budget if you’d rather not do the shifting yourself.

What might keep you up at nights, mind you, are adrenalin-inducing thoughts of the little drop-top’s go-kart-like handling. The way it flies through corners is one of the reasons the Cooper Convertible doesn’t need a lot of power. You simply don’t have to slow down much to take a corner, allowing you to maintain forward momentum along with optimal revs when exiting the curve. It’s an experience that will keep you coming back for more, and one that doesn’t require any particular driving expertise to execute well.

Truly, the Mini is a performance car for amateurs. Don’t get me wrong, as I wouldn’t recommend going full throttle into a corner at any time. If you lack the skills to know how to judge what speeds are reasonable and safe for a given situation it’s best to build up confidence over time, but I can pretty much guarantee that you’ll be able to go faster in a Mini than you’ve ever tried before, unless you’re an advanced or professional driver stepping out of something exotic. For average Joes and Janes, any Mini will up your skillset measurably, making you feel like a pro as soon as you ramp up the courage to push it a little harder than you might otherwise do.

As rewarding as the Cooper Convertible is to drive, it’s also a very pleasant little luxury car for wiling away the miles. My particular example was decked out with the $2,800 Mini Yours Package, which included a great looking two-tone Soda Sport leather-wrapped steering wheel, glossy piano black interior trim, extremely comfortable and supportive sport seats, Satellite Grey paint and black mirror caps, while two-tone Pepper White and grey-striped leather upholstery that matched the two-tone theme on the dash and doors made the tiny tot seem like the offspring of a Rolls-Royce. Extra options included the $1,850 Wired Package, which added USB and Bluetooth streaming audio, smartphone integration, voice recognition, Mini Connected (which is one of the best infotainment systems on the market, especially if you’re pairing up an iPhone), and a navigation system, all integrated within the dinner plate-sized central speedometer pod, the needle of which circles around the outside of the infotainment display for a very cool visual. The $990 Convenience Package was also included, adding heatable front seats, an auto-dimming rearview mirror, rain-sensing wipers, automatic headlamps and rear parking sonar, the latter helpful when the top is down and vision is reduced, while the Cooper Convertible’s surprisingly well appointed standard feature set kept the upscale theme going.

The standard car, which starts at $29,500 plus $2,295 for freight and pre-delivery prep, includes a multi-function tilt and telescopic steering wheel, pushbutton ignition, power windows with one-touch up/down, automatic climate control, USB connectivity and Bluetooth hands-free, an on-board computer, multi-colour ambient lighting, a whole slew of other items expected in Mini’s near-luxury class, and a powered cloth roof with really useful sunroof capability that can open partway at speeds of up to 120 km/h.

Standalone options include proximity sensing Comfort Access at $390, Harmon/Kardon sound for $750, satellite radio at $450, fog lights for $250, and for those who want that aforementioned Rolls-Royce experience to the max, a Mini Yours leather instrument panel upgrade at $1,000. Lastly, my tester included sticky 205/45R17 Bridgestone Potenza tires wrapped around a very sweet set of 17-inch twin-spoke black turned alloy wheels for $1,000.