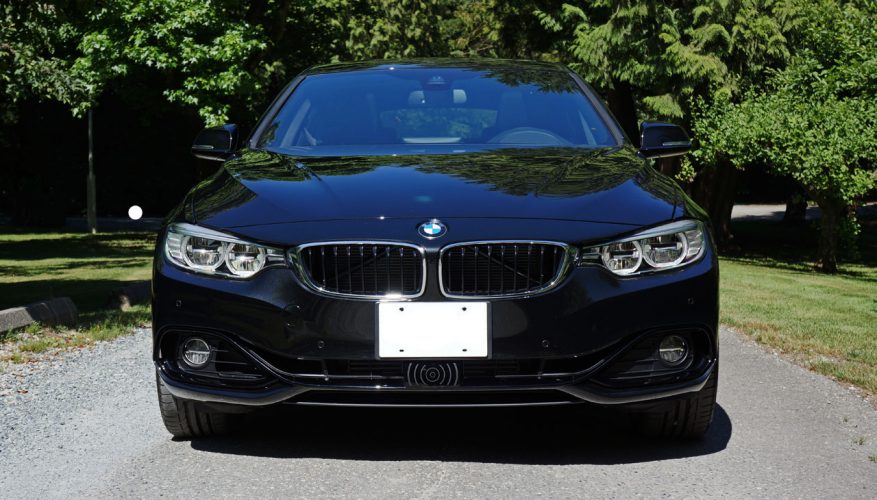 By: Trevor Hofmann
Before seeing the new 2015 4 Series Gran Coupe in the metal it was hard to get excited about yet another new model spun off of BMW’s ubiquitous 3 Series / 4 Series platform architecture, but now I understand.

Forgive me for copping attitude, but there are only so many niches within niches that need to be filled. After all, Canadian Bimmer fans can now get the good old 3 Series four-door sedan (in all-new duds mind you), the 3 Series Touring (wagon), the more recently added 3 Series Gran Turismo (taller, larger five-door liftback), the ActiveHybrid 3 (sedan) and the M3 (sedan), while fans of two-door BMWs can purchase the 4 Series Coupe and 4 Series Cabriolet, plus M4 versions of both. Likewise, those who want a taller ride height and more utility can opt for an X3, while a new X4 (think shrunken X6) has also joined the fray. Did I miss any? Ah yes, the subject of this review. The Bavarian brand’s new 4 Series Gran Coupe slots in alongside the aforementioned 4 Series Coupe and Cabriolet, but I must admit that it’s more like a sportier 3 Series sedan than anything with two doors, while its rear liftback configuration incorporates some of the same flexible functionality that its more upright 3 Series GT sibling possesses.

Both attributes make the 4 Series Gran Coupe a very good addition to BMW’s compact/mid-size lineup. In fact, I like its design far more than any of its 3 or 4 Series siblings, which makes it a shame that the suits in Munich announced no M version would be created. Of course, I’m not about to believe a thing BMW says about minimizing future product expansion plans. After all, this is the carmaker that has been constantly creating category crannies within segment nooks, but for the time being we’ll have to make do with the fun-loving and fuel-efficient 428i Gran Coupe I tested, as well as the impressively quick 300 horsepower 435i Gran Coupe.

Both models come in standard rear-wheel drive or the automaker’s xDrive all-wheel drive system, my tester being the latter. If you want to shift your own gears, however, you’ll need to stick with rear-drive and the base 2.0-litre turbocharged engine, as all other trims come with BMW’s eight-speed Steptronic or optional as-tested eight-speed Sport Steptronic automatic transmission, the latter allowing for manual shifting via steering wheel paddles. This $1,600 upgrade also adds a nice leather grip and boot as well as Sport+ mode to the Driver Experience controls, for track-capable performance.

Track capable? For sure. BMW’s 2.0-litre four-cylinder is no slouch, with an energetic 241 horsepower and 258 lb-ft of torque it allows for a 6.1-second sprint to 100 km/h with the manual and an even quicker 6.0-second time when hooked up to the auto. Even with the added weight of all-wheel drive the 428i Gran Coupe’s run to 100 km/h remains 6.0 seconds flat, much thanks to four-wheel grip off the line, plus I’m willing to guess that the xDrive factor actually improves wet weather straight-line performance when side-by-side with its rear-drive sibling.

I’ve owned numerous BMWs over the decades, so you can probably appreciate that I’m a rear-wheel drive fan through and through. Now, with all of the electronic driving aids added to modern-day BMWs, rear-wheel traction adheres almost as well as all-wheel control unless the weather is truly nasty. Bad weather is common across our great country, however, which is why xDrive has become so popular even with BMW’s performance models. Well, that and the brand’s ability to make xDrive feel like you’re driving a rear-drive car most of the time. Inclement weather in mind though, I’ve tested it on snow-covered roads as well as ski hill parking lots where packed snow more often than not bogs down a two-wheel driven car, and can attest to its benefits.

Fortunately for me, my time with the 428i Gran Coupe xDrive was bright and sunny, which was as ideal for driving as it was for taking photos. As mentioned earlier, I love the lines on this car. It takes all that’s good about the new 3 Series and then adds the longer, leaner and lower 4 Series Coupe’s features. End to end the two-door Coupe and four-door Gran Coupe are identical at 4,638 millimeters, as is the case from side to side and from axle to axle, which measure 1,825 millimeters and 2,810 millimeters respectively. Likewise, everything up to the A-pillars is 4 Series Coupe, but after this point the roofline extends an additional 112 mm before canting off towards the appropriately abbreviated hatch lid, where it meets up with identical taillights to the Coupe, which are longer, narrower and shaped differently than those used on the 3 Series Sedan. Also unlike the 3 but just like the 4 Coupe, all four of the 4 Series Gran Coupe’s doors are frameless for a freer more open ambience. It all combines to form a very elegant sport sedan in the relatively new four-door coupe tradition, not to mention the only four-door coupe in its C-segment premium class (Mercedes’ new CLA is smaller and less refined so therefore competes more directly with Audi’s new A3 and BMW’s 2 Series).

Just the same, interior roominess is quite good even when compared to the 3 Series Sedan. Of course, while rear headroom is better than its two-door counterpart it’s not as plentiful as the 3, yet my five-foot-eight frame never felt cramped sitting in back. In fact, the bucket-like rear layout is extremely comfortable for two average sized adults, with plenty of support in all the right places. What’s more, compared to the two-door that only provides seating for two, instead including a small plastic tray in between where a fifth person might otherwise squeeze in, the 4 Series Gran Coupe is a 4+1 seater.

Trunk space is identical to the 3 Sedan at 480 litres, not to mention it’s 35 litres greater than the 4 Series Coupe, plus the convenience of its liftback layout along with the rear seatback’s ability to fold in a 40/20/40 configuration to fully optimize passenger and cargo carrying capability makes it a real boon when hauling longer items, such as skis. Lay all three seatback portions flat and luggage capacity expands to accommodate up to 1,300 litres of gear, which just happens to be “best-in-class when it comes to the premium four-door coupes currently offered,” says BMW. The German automaker provides standard power to the liftgate as well, and if ordered with the Smart Opener system, all it takes to gain access is an air kick under the rear bumper. People might look at you a bit weird in the grocery store parking lot, but they should clue in when the liftgate starts to rise all on its own.

As with all other 3 and 4 Series models, the new 4 Series Gran Coupe boasts a truly upscale and sophisticated interior. Quality materials include soft-touch plastics just about everywhere, even right down to the bottom of each door panel. The only surfaces BMW needs to improve are the lower centre console panels that come in contact with the inside knees and hips, which are made from a hard, thin plastic that’s unbecoming of a premium car in the 3 and 4 Series’ class.

Features are plentiful, though. At $44,900 plus $2,095 for freight and pre-delivery prep, the 428i Gran Coupe comes with all the usual luxury items expected in this category, as well as the aforementioned powered trunk lid, a leather-wrapped sport multifunction steering wheel, powered sport seats with driver’s memory, heated front and rear cushions, rain-sensing wipers, an auto-dimming rearview mirror, powered glass sunroof, display audio with USB and Bluetooth connectivity, dynamic cruise control, bi-Xenon headlights with BMW’s trademark LED corona rings, and a host of EfficientDynamics technologies to save fuel and reduce emissions, such as ECO PRO added to the Driving Experience mode selector, brake energy regeneration, and automatic start/stop. The result of these fuel-friendly features along with the four-cylinder powertrain’s inherent stinginess is a rating of 10.5 L/100km in the city, 7.0 on the highway and 8.9 combined with the automatic, and these numbers are for the all-wheel drive variant I was driving.

If you want to personalize your 428i Gran Coupe beyond the already lengthy list of exterior and interior colours, you can opt for the $1,900 Individual Line that includes various leather upholstery choices, numerous wood and aluminum interior trim enhancements, aluminum door scuffs, and 19-inch rims, plus you have the option of paying a bit more for a gorgeous leather-trimmed upper dash, as included in my tester, and some unique exterior colour options (I particularly like BMW’s line of “Frozen” matte finishes).

All of the Executive and Premium packaged features pampered me during my stint behind the wheel, but what really engaged me was the car’s driving dynamics. I played around with ECO PRO mode and would no doubt keep it here fairly often to save on fuel if this were my car, but Sport mode lets the engine’s full band of feral horses run at full gallop and therefore got the nod for most of my test. Eight-speed Sport Steptronic gearbox included, flicks to each paddle allowed real driver engagement along with the capability to wring out everything the engine had to offer. Maximum power arrives between 5,000 and 6,500 rpm, but the sound of the engine revving at maximum made me spin it higher just for the fun of it. One hundred percent of the engine’s 258 lb-ft of torque comes on much lower in the rev range, starting at 1,450 rpm and stretching all the way to 4,800 rpm, resulting in extremely tractable twist no matter where you stomp on the throttle. My tester’s 19-inch rims on 255/40 run-flat rubber increased the grip offered by the already competent chassis, making for a thoroughly fun sport sedan when flung through tight, twisting turns, while I was free to go hard on the brakes over and over without experiencing much fade at all. On the highway it’s equally at home, its long wheelbase making for a solid, planted stance and comfortable ride, for its performance class at least.

After time well spent with BMW’s latest four-door, I now fully understand why the brand’s product planners chose to build it. M3 aside it’s a sportier sport sedan designed for those who want a little more performance and individual style than the ever-popular 3 Series can offer, yet it goes about providing all of that sport with impressive functionality. Truly, the 4 Series Gran Coupe is a very real best of both worlds answer to a question most of us outside of BMW’s inner circle weren’t even asking. Now that it’s here, I can’t imagine it being anything but successful.
©(Copyright Canadian Auto Press)
Car Shopping Tools