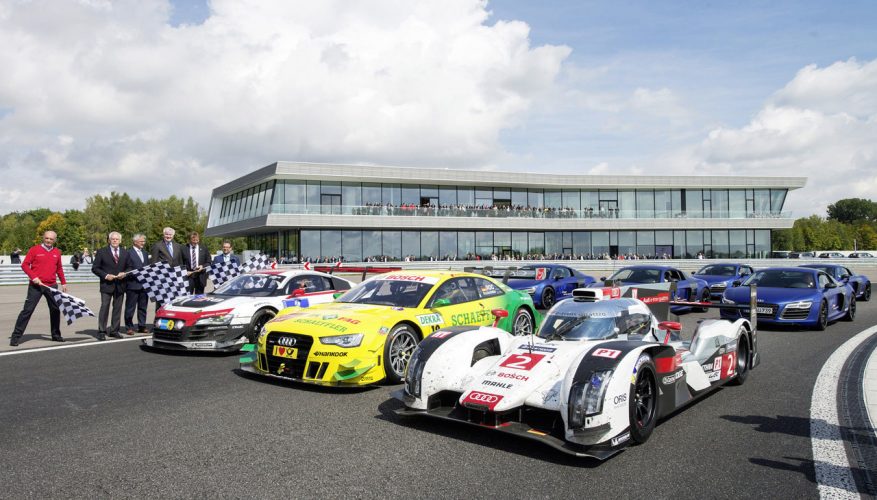 By: Trevor Hofmann
While motorsport might not play first fiddle in Audi’s operations as it does for some pure performance car brands such as Ferrari, there’s no denying that its decades of winning racing programs have built respect for the German brand, highlighted by its world rally dominating Quattros in the eighties and more recently, sports prototype dominance at Le Mans and throughout the FIA World Endurance Championship, plus its strong performance in Germany’s popular DTM touring car series, where it currently occupies three of the top five positions.

In order to make certain its various motorsport programs remain competitive moving into the future, the four-ringed brand’s racing division, Audi Sport, has moved into new digs in Neuburg, 19 kilometres west of the road car division’s headquarters in Ingolstadt. The state-of-the-art 116-acre facility comes after 20 years of planning and two years of construction, and is now home to Audi Sport’s top engineers, technicians and additional staff that solely deal with the division’s R18 E-Tron Quattro, RS5 DTM and R8 LMS Ultra race cars.

During the official opening ceremony last Saturday, in which Audi’s top leadership as well as local government officials and other VIPs were present, works drivers ran the various Audi Sport racecars around the on-site test track.

The next step will see the entire works team occupying the facility, as well as Audi Sport’s customer racing department, the latter that will occupy the new Motorsport Competence Center during the first half of next year.