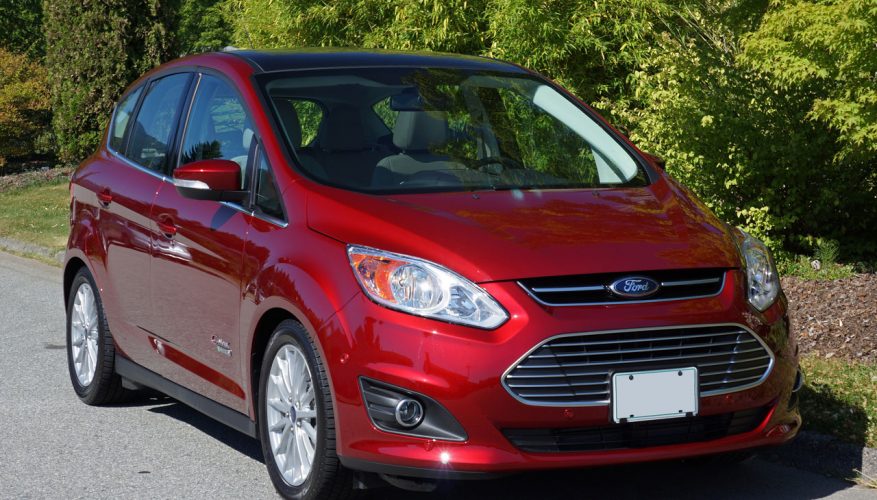 By: Trevor Hofmann
Am I getting older or is there some other reason why I get just as excited about driving an innovative plug-in electric vehicle as I do when slipping behind the wheel of something ultimately sporty like the new Fiesta ST?

Don’t answer that. As I recently passed the 50 yard line (a little over a year ago) I’m well aware of my aging body and even more fragile mind, yet while my reflexes might not be quite as quick as they used to be I still enjoy the occasional romp down a backcountry road in a performance car. All said there’s something equally intriguing about silently going about my day’s business without spending much more than a nickel on fuel, and then popping down to my local city hall to juice it up with electrons for free. I don’t know how long such freebie plug-in programs will continue, but I for one will take full advantage of local politicians and their do-good green agendas as long as I have cars as efficient as Ford’s new C-Max Energi to drive around in.

If there’s a car that can compete dead-on with Toyota’s iconic Prius it’s the C-Max. Available in non-plug-in C-Max Hybrid and plug-in C-Max Energi configurations (there’s no conventionally powered C-Max sold in Canada or the U.S.), the upright mini-minivan-cum-crossover styled Ford with its slick Aston Martin inspired bright chrome grille is ultimately city friendly and plenty accommodating. It’s tall so you sit up high in your seat like a CUV, while there’s still more headroom available for elevated drivers and passengers. The rear doors don’t slide, but they open wide enough for easy access to ample seating for two large adults or three smaller ones abreast.

The C-Max Hybrid offers a large cargo hold with a flat load floor, its capacity totaling 694 litres behind its 60/40 split-folding rear seatbacks and 1,490 when they’re lowered, whereas the C-Max Energi’s larger motive battery robs some of the luggage space for a still commodious 544 litres in back and 1,212 when long loads and only one or two occupants are aboard. Ford smartly includes a foldable load-floor extender that makes it flat in back or otherwise can be flipped up and out of the way, but when the rear seatbacks are tumbled down there’s about a half-foot drop from back to front so the cargo area is anything but flat. Still, pack your gear carefully and it’ll hold a lot of whatever you’ve got to carry.

Climb in front and the utile C-Max is anything but utilitarian. If you’ve driven a Ford lately you’ll notice a lot of common hardware, such as its steering wheel-mounted buttons and column stalks, power window switches and the remote mirror toggle, the HVAC interface and of course the many high-resolution full-colour graphic displays that make up its primary gauge package infused multi-information display (complete with pretty green leaves to let you know you’re driving efficiently) and centre stack-mounted infotainment system. These are some of the best electronic interfaces in the industry, the latter being MyFord Touch with its wonderful quadrant layout that I find particularly easy to use.

The cabin is made of a higher grade of materials than most of its peers, including that Toyota hybrid I mentioned earlier. The dash top is completely soft to the touch all the way down to the classy metallic trimming that strikes through the instrument panel’s centre, while the front door uppers are also made from soft-touch plastic. There’s yet more attractive metal tastefully applied throughout the interior, while the car’s switchgear looks good and is impressively made with nice high-quality damping on all, plus rubberized finishings on some.

My tester featured great looking Medium Light Stone (beige/taupe) leather upholstery that matched stylish two-tone black and beige dash and door panels for an upscale look that further sets the C-Max apart from its main Japanese rival, while an overhead console included one of my favourite conveniences, a handy sunglasses holder situated just ahead of some lighting switches and a button for letting the sunshine in via my tester’s enlightening panoramic glass sunroof. My C-Max Energi’s cabin was lacking nothing unless you require a heated steering wheel or rear seat heaters, and could justifiably pass off for a luxury-lined Lincoln if it also included cloth-wrapped roof pillars and of course a framed, four-pointed star on the steering wheel hub along with MyLincoln Touch graphics on the infotainment screen.

Premium sector in mind, the seat heaters featured no less than five-way functionality resulting in mildly warm to therapeutically transformational temperatures, while the front seats themselves were firm and supportive in a European sense, with decent side bolstering no less. You sit upright for a commanding view of the road ahead and great visibility all-round, but Ford still includes a reverse camera with guidelines to aid when backing up. The optional Sony stereo was excellent, making Modest Mouse’s Ocean Breathes Salty sound just about perfect (they’re coincidentally signed to Sony BMG, but I digress), just one of the many advanced electronic systems that set well-equipped Ford models apart from their contemporaries.

As you’ve likely gathered, the C-Max Energi I tested had all of these options included, and while living with it was a pampering experience, this wasn’t what impressed me the most. As mentioned, its ability to drive all over town at regular speeds with strong performance when called upon, in total comfort no less, the best part being that it cost me next to nothing when it came time to fill up. Charging it at the city hall was handy as it was only a few blocks away from my home, although this trek was only needed because I live in an apartment that doesn’t facilitate charging. Many newer apartments are better equipped, and of course those who live in single-family dwellings can charge the C-Max in their garage or run an extension to their driveway. Most of the time I only charged it for three to four hours and generally found 36 to 38 kilometres of estimated EV range showing on the display panel, although one time I left it there for seven hours and saw a 48-km estimate. Still, this was only a guesstimate because you can gain a lot of range coasting downhill via brake regeneration, or alternatively it will eat up a lot more electrons going uphill or at high speeds such as when on the highway. Idling with air conditioning and radio on will use power too: about 10 minutes of this took two kilometres off the estimated range indicator. Ford advertises 33 km of total EV range, and from my experience I think they’re being conservative. They seemed right on with their average recharging time of 2.5 hours on a 240-volt charger, however, but I never tried it on a 120-volt outlet so I can’t comment on the company’s seven-hour claim.

All in all, when I picked up the C-Max Energi it showed a long-term fuel economy average of 5.4 L/100km on the display, and when I dropped it off after one week that average was 5.0 L/100km. This is in line with its Transport Canada rating of 5.0 L/100km combined or 2.2Le/100km. All I know is my usual $60 to $80 weekly refueling cost went down to $14, and that put a big smile on my face. Another bonus is the requirement of unleaded regular fuel, saving about 10-percent at the pump compared to cars that thirst on premium. Another C-Max Energi feel-good factor is an AT-PZEV emissions rating (EPA Smog Rating 9).

That 33+km range comes via a 7.6kWh Lithium-ion (Li-ion) battery feeding a permanent magnet AC synchronous electric motor, whereas the gasoline part of the equation is a 2.0-litre Atkinson-cycle four-cylinder that drives the front wheels through an electronic continuously variable transmission (e-CVT). Total combined output is 195 horsepower (61 horsepower more than the Prius Plug-in’s 134-hp net rating) and 129 lb-ft of torque, which translates into good performance off the line and great highway passing power. Ford claims a projected electric mode top speed of 137 km/h, and while I never drove it this quickly it certainly cruised happily along in EV mode at 120; likewise I never tested out its overall top speed of 164 km/h.

Despite all of the impressive details already covered, retail pricing might be this efficient family hauler’s best attribute. Once again the electrified Ford beats the Toyota Prius and Prius Plug-in, with the base C-Max Hybrid SE starting at $23,914, the SEL at $26,317, and the plug-in C-Max Energi going for $32,369, all excluding $1,565 for freight and pre-delivery prep.

With the C-Max Energi, Ford is certainly making a good argument for new car shoppers to choose a plug-in hybrid for their next purchase.
©(Copyright Canadian Auto Press)
Car Shopping Tools