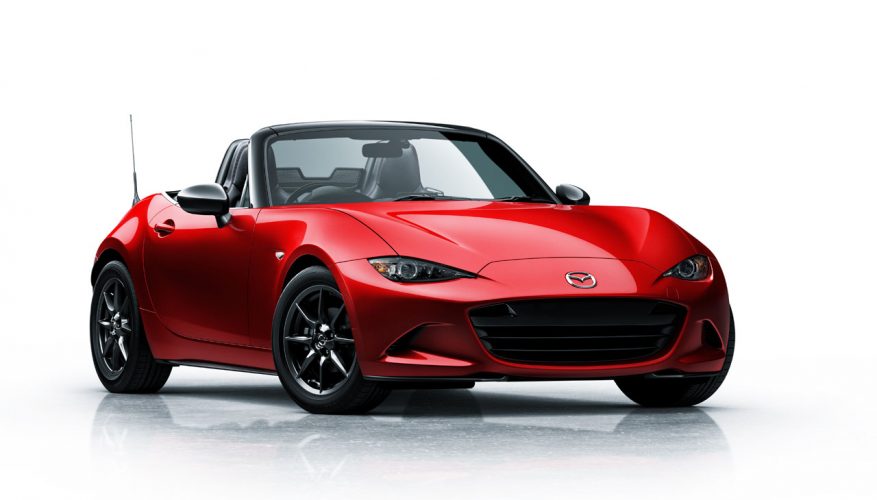 By: Trevor Hofmann
Yesterday, a full 25 years since the first generation model was introduced, Mazda unveiled the latest fourth-generation of its iconic MX-5 (Miata) roadster. By looks alone it appears to be worthy of the revered MX-5 nameplate, not to mention torchbearer status for the Japanese brand’s performance image throughout the latter half of this decade.

The new 2016 model year design represents a bold departure from any previous MX-5, its cute and friendly persona replaced by a downright serious, purposeful and even slightly menacing look. The hood is long and low, not unlike the old Honda S2000’s, ending with a deep and wide version of the brand’s new trapezoidal grille design. Likewise the new headlight clusters are narrow as if the car is determinedly squinting, capping off a set of sculpted front fenders which follow a beltline that tapers inward as it passes by the doors and then bulges outward as it rounds over the rear wheels, forming a strong, planted appearance that will no doubt make Scion FR-S and Subaru BRZ drivers immediately pay respect. A traditionally short rear end design is finished off with taillights that immediately remind of the gorgeous Jaguar F-Type, not a bad inspirational muse at all. All in all however, the new MX-5 comes together into a cohesive whole that appears original and very exciting.

As part of Mazda’s Skyactiv approach to efficient design and engineering, the new 2016 MX-5 is more than 100 kilos (220 lbs) lighter than the car it replaces, which means that when fitted with a manual gearbox it should weigh less than 1,025 kilograms (2,260 lbs). Compare that to the aforementioned FR-S that weighs in at 1,263 kg (2,785 lbs) and then factor in that the new MX-5 should have handling characteristics at least as impressive as the current model, and it shouldn’t be too difficult to figure out which car will achieve the quickest time on the local autocross course.

Then again road and track performance must also be measured in engine output, the current 2015 MX-5 good for 167 horsepower at 7,000 rpm and 140 lb-ft of torque at 5,000 rpm in base trim compared to FR-S output of 200 horsepower and 151 lb-ft of torque. So far Mazda isn’t talking about engines much at all, only saying that Skyactiv technologies will be included. Likely a Mazdaspeed version of the MX-5 will become available along with the base model, and if it gets anywhere near the powertrain its Mazdaspeed3 sibling enjoys the FR-S and many other small sports cars won’t be able to keep up.

With a total 25-year production volume of more than 940,000 units passed in July of this year, if the MX-5 doesn’t manage to pass the million-unit milestone in the final 2015 model year of its current third-generation design then this new version will quickly pop it over the top, helping it to hold onto its Guinness World Record for the best-selling two-seater sports car of all time.

We’ll make sure to update you with more details as soon as they become available.
©(Copyright Canadian Auto Press)
Car Shopping Tools