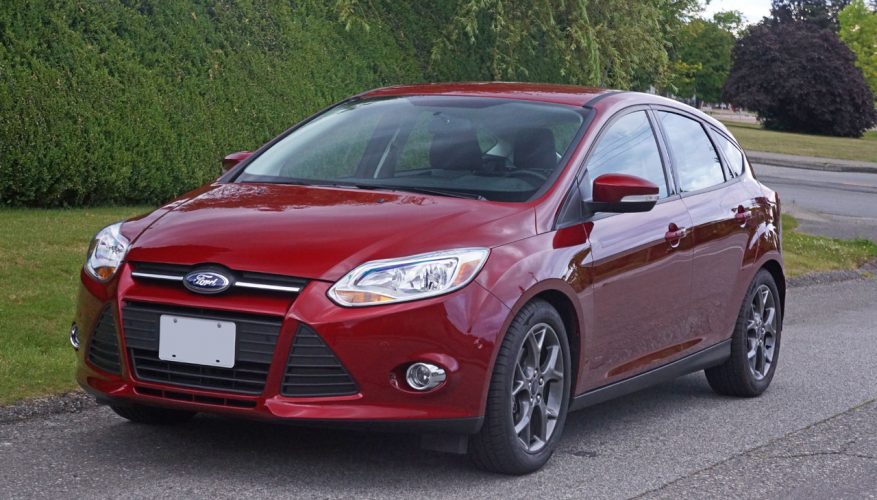 By: Trevor Hofmann
There’s a reason why automakers give we journalists vehicles in different states of trim. If you hadn’t already guessed, it’s because the little badge on their backsides can make them look and feel very different from one another. The 2014 Ford Focus, for instance, comes in two different body styles, sedan and hatchback, while the latter gets three radically different grille designs depending on whether you choose SE or Titanium trim, the ultra-green Focus Electric, or performance-oriented Focus ST. But even when choosing between the base SE and near-premium Titanium, exterior trim, interior detailing and the quality of materials differ.

Rare for the mainstream compact class, the Focus Titanium not only features a luxurious soft-touch dash top, but also soft-touch door uppers. Normally it’s one or the other, not both. The Focus SE follows the status quo instead, with Ford opting to upgrade its refinement levels by making the dash top soft to the touch and its door panels out of the class average harder plastic. This is where you might say, well who really cares? But if would-be buyers didn’t care, Ford obviously wouldn’t spend the necessary coin to do it, would they? In reality the Focus Titanium is so nicely executed inside it can justifiably do battle against compact premium models like the Acura ILX, Lexus CT 200h, Mercedes-Benz B200 and others, and being that Ford’s premium brand Lincoln has yet to offer a compact model in its lineup, a lot of leeway is left open for the blue-oval brand to do so.

I’ve spent a fair bit of valuable time talking about the Focus Titanium when this review is actually about the lesser model, the Focus SE. Still, the level to which Ford equipped my SE tester helped me to understand that just because it wears the same moniker as the base Focus Hatchback doesn’t mean there’s simply a base car and a fully loaded one with nothing in between. The SE, as it stands, offers a broad range of options that quickly bring it up to near-premium levels of features too, if not to the same level of refinement as its fancier sibling.

As impressive as this standard list of features appears, I was downright spoiled by my SE tester’s add-ons. The extras included the superb MyFord Touch full-colour touchscreen infotainment system with navigation, a reverse camera system, a great sounding 10-speaker Sony audio upgrade with a subwoofer, satellite radio and USB connectivity, plus dual zone automatic climate control, an overhead console with a convenient sunglasses holder, a rear centre armrest, cool ambient lighting, a perimeter alarm, not to mention a meaty leather-wrapped multi-function steering wheel with paddle-shifters, a leather- and aluminum-enhanced shifter knob with Ford’s SelectShift thumb rocker switch, a cool set of grey and black two-tone cloth sport seats with contrast stitching, front seat heaters, fog lamps with chrome surrounds, 17-inch dark stainless painted alloys, and rear disc brakes. The result is a car that does everything most owners could want of it and looks fabulous doing it.

Other than the Focus Electric and ST models, all Focus trims come with an impressive 2.0-litre Ti-VCT GDI four-cylinder engine capable of 160 horsepower and 146 lb-ft of torque, plus the choice of a five-speed manual, six-speed PowerShift dual-clutch automatic or my tester’s six-speed PowerShift dual-clutch automatic with SelectShift manual control. From a driving perspective, the latter transmission is the most engaging automatic in the mainstream compact class (not including race-spec cars like Mitsubishi’s Evo). It’s quick shifting and fun to flick through the gears via the aforementioned paddles, while extremely efficient as represented by its claimed fuel economy numbers suggesting 7.6 L/100km city, 5.3 highway and 6.6 combined. That’s better than the base five-speed manual, incidentally, which comes in at an estimated 7.8 city, 5.5 highway and 6.8 combined. Of course we should ignore these numbers other than for comparisons with similar 2014 model year cars, as Canada’s five-cycle fuel economy tests for 2015 models will be much more realistic.

In order to achieve any claimed fuel economy figures you’ll need to drive conservatively at best, and while it’s possible to use the steering wheel paddles to short shift earlier than the automatic would otherwise do in order to eke out greater efficiency, something I do around town a lot, the Focus begs to be driven more aggressively. There’s a lot of power under the hood after all, so much so that only a decade or so ago the SE’s 160 ponies would have only been found in an extremely potent sport-tuned model that we journalists would’ve been gushing over, not a compact hatchback’s base engine. Added to that is a very competent fully independent suspension setup with stabilizer bars at both ends for taut Teutonic-like handling, aided by those previously mentioned 17-inch rims on 215/50R17 rubber, all of which would have made the SE is a very competitive hot hatch back in the day. The SE only seems more commonplace now because of cars like the 252 horsepower Focus ST.

The Focus Titanium I spoke of earlier in this review benefits from many of my tester’s optional equipment, although they come standard in the upgraded car. The only items my car didn’t feature that are already included with the Titanium are proximity sensing remote access with pushbutton ignition, power windows with one-touch up and down all-round, reverse parking sonar, and exterior detailing like the Titanium’s piano black grille, black headlight surrounds, fog lights with piano black surrounds and chrome accents, chrome beltline molding, plus of course the additional interior refinements I stated before.

All Focus Hatchbacks are extremely functional cars from a practical perspective, with ample room for five regular sized adults and a sizable 674 litres of cargo capacity behind the 60/40-split rear seatbacks, or 1,269 litres when they’re laid flat.