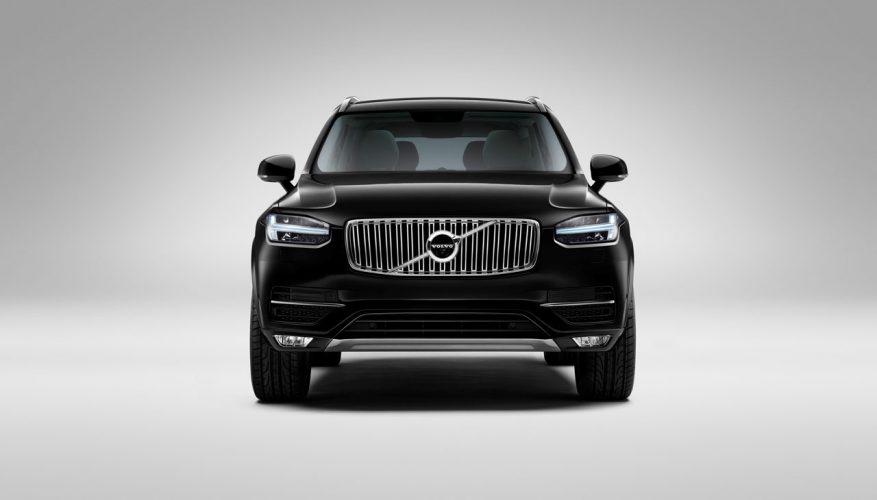 By: Trevor Hofmann
Rarely has a new model introduction been more important for any automaker than this 2016 XC90 is for Volvo.

Volvo has recently been undergoing a metamorphosis with an all-new S60 sport sedan and V60 sport wagon plus relatively strong sales from its XC60 compact crossover, but its once top-selling XC90 has been languishing on the sales charts thanks to 12 years without a major overhaul. Production of the original began in August of 2002, which is a little more than twice as long as most luxury crossover SUVs go without a redesign. Those wondering when the next-generation of Volvo’s mid-size seven-passenger ute would arrive and then what it would look like can finally see for themselves as the Swedish luxury brand has now released photos along with a fairly detailed press release of what we can expect under the skin.

Before delving into the details, a bit of a backgrounder is due as to why it’s taken so long to get the new XC90 off the drawing board and onto the street. Volvo was once the darling of Ford Motor Company and part of the Dearborn, Michigan-based automaker’s Premier Auto Group (PAG) luxury division, responsible for numerous blue-oval platform architectures (Focus, 500/Taurus/MKS, Freestyle/Taurus X/Flex/MKT, etc.), some of which are still in use within the Ford/Lincoln lineup today, but in order to pull in much-needed funds to finance the development of its core brands, Ford sold Volvo to China’s Zhejiang Geely Holdings in 2010, the last of PAG’s holdings to be jettisoned off after releasing Jaguar and Land Rover to India’s Tata Motors in 2008, and Aston Martin to a consortium comprised of ex-Formula One team principal and founder of Prodrive (Subaru World Rally Team) David Richards, Aston Martin collector John Sinders, and a Kuwaiti firm named Investment Dar and Adeem Investment Co. in 2007. Zhejiang Geely Holdings has injected much needed development and production money into the Swedish brand, and as mentioned we’ve recently been seeing the results, the new 2016 XC90 being the most evident example of a luxury brand back in the saddle and ready to compete.

The new XC90 is also most important because it’s a clearer example of what we can expect from Volvo’s entire lineup as the company moves into its next phase of redevelopment. While the new model’s styling couldn’t be anything but a Volvo, critically important for such an iconic brand, only the basic two-box shape of the current XC90 carries over to the upcoming model. Anyone familiar with the Swedish brand will recognize its most identifying feature, the upright rectangular grille complete with a chrome sash-like left-to-right upward diagonal slash and “Mars” (or alternatively male sex) symbol-like Volvo badge at centre (a circle with an arrow pointing upward from its 1:30 position). While there are some updates in design, the biggest difference from old to new comes down to size. Like so many other premium (and mainstream) brands these days, the new Volvo grille is grand for a more dramatic visual effect. A new feature that was previously only used in concepts is the T-shaped set of LED daylight running lights that bisect the headlamp clusters, appropriately dubbed “Thor’s Hammer” by Volvo’s design team. The design cue is unique and bold, while most should also find it quite attractive. Tall vertical taillights are signature Volvo items as well, although their new designs are totally new and like the front lights, should be welcomed by all.

Like the new XC90’s totally updated skin, most of what lies underneath is new too. First and foremost the new XC90 rides on Volvo’s new Scalable Product Architecture (SPA), a modular platform architecture that will also underpin other models within the automaker’s future lineup. In the XC90, part of that undercarriage includes a new electronically controlled air suspension that offers “a choice of five modes, including one where the driver is free to tailor the settings to his or her personal taste,” stated a press release.

Also critical, the XC90 ushers in an all-new and totally modern-tech four-cylinder engine family dubbed Drive-E. Two engines will initially be available after the limited run First Edition gets gobbled up by eager Volvo fans (more on this in a moment), the entry-level being filled by the T6 All-Wheel Drive featuring a turbocharged and supercharged 2.0-litre four-cylinder engine capable of 316 horsepower and 295 lb-ft of torque, which you may already realize is much stronger output than the current 3.2-litre V6 ¬– 76 more horsepower and 59 additional pound-feet of torque to be exact. As the name suggests, all-wheel drive is standard, while shifts come via a state-of-the-art eight-speed automatic transmission. For those wanting even more power and/or to make a smaller footprint on the environment, the top-line XC90 will use Volvo’s new Twin Engine that combines the same 2.0-litre four with a plug-in hybrid drivetrain for a very impressive 400 horsepower.

While most of us can imagine that a 12-year-old vehicle is likely a bit dated inside, the new 2016 XC90 is anything but. While maintaining Volvo’s Scandinavian design principles, particularly the brand’s clean, uncluttered, contemporary lines and a minimalist approach to gadgets and switchgear, the new model also benefits from beautiful wood veneers, tastefully applied metal accents, as well as supple looking leathers. What’s more, those hardwoods are varied and can be had in matte and/or gloss finishes, the metals are surfaced in bright chrome plus brushed, and leathers will come in traditional dark tones as well as rich cream. The look is more Range Rover than BMW or Mercedes-Benz, which won’t only appeal to Volvo’s regular customer base but also to those who favour the light and airy Swedish approach to design compared to often austere and business like Teutonic interiors.

Being that Volvo is trying to climb its way back into the hearts and minds of the world’s luxury consumers, they should be quite aggressive in offering better value than the XC90’s luxury peers when it comes to standard and optional features. On the list are various wheel options including eight-spoke 21-inch alloys, plus an interior featuring a tablet-like touchscreen infotainment system on the centre stack allowing near button-free operation of features such as navigation, a reverse camera system, and a 19-speaker 1,400-watt Bowers & Wilkins audio system with air-ventilated subwoofers (a first for the auto segment). Other features include heated and ventilated front seats, heated second-row window seats, powered third-row seatbacks, and much more.

Safety has always been an important aspect of the Swedish brand’s reputation, and therefore the new XC90 won’t only include all of the features we’ve grown to expect from luxury carmakers, but also some brand new leading-edge safety technologies. With respect to active safety, Volvo’s intersection braking system stops the XC90 if its driver tries to pull out in front of an oncoming vehicle. As for passive safety, within its strangely named Run-Off Road Protection package there’s a technology that cushions vertical forces by absorbing energy between the XC90’s seats and its frame. Additionally, “City Safety, which becomes the umbrella name for all of the Volvo Cars’ auto brake functions, is also standard,” says Volvo in a press release. “It now covers vehicles, cyclists and pedestrians in front of the car, day and night.”

Canadian pricing for the XC90 T6 AWD with the Momentum (Premier) trim level starts at $60,700, while the special First Edition priced at $81,500. The First Edition will be limited to 1,927 examples globally (the number referencing the year Volvo was founded, 87 years ago), and can be reserved online at Volvocars.com starting September 3rd at 10:00 AM EST. The First Edition includes every feature currently available, plus comes exclusively with Onyx Black exterior paint, Amber Nappa leather upholstery, a Charcoal leather dash-top, Linear Walnut inlays, unique eight-spoke 21-inch inscription alloy wheels, and special badging.

“Those who want to be among the first ones to own the best SUV in the world have to act fast,” said Alain Visser, Senior Vice President, Marketing, Sales and Customer Service of Volvo Car Group. “The huge interest in the all-new XC90 indicates that the First Edition will sell out quickly.”
©(Copyright Canadian Auto Press)
Car Shopping Tools