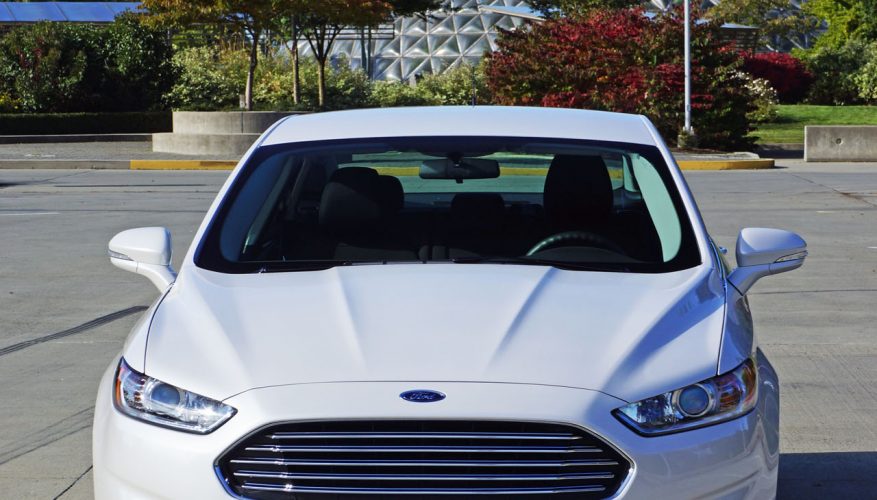 By: Trevor Hofmann
What a difference a stylish new design can make to the sales success of any car. Such is the case with Ford’s popular new Fusion, completely redesigned in 2012 for the 2013 model year, and physically identical for the 2014 model year.

Pulling inspiration from the beautiful and extremely expensive Aston Martin Rapide four-door super coupe, the Fusion’s long, lean, elegant lines allow Joe and Jane average a little dignified air. And why not? After all, Ford once owned Aston and paid dearly for it in the form of annual and overall losses, therefore recouping some of the Fusion’s development costs by lowering its design budget is only reasonable.

After initially reviewing a 2013 Fusion SE with its 1.6-litre Ecoboost four-cylinder last year, I had the pleasure of testing two 2014 iterations, the first also an SE model with the brand’s 2.0-litre Ti-VCT GTDI Ecoboost four-cylinder, and the second the subject of this review, a regular non-plug-in Fusion Hybrid, boasting a 2.0-litre Atkinson-cycle four-cylinder engine that makes a maximum of 141 horsepower and 129 lb-ft of torque. This might not sound like much on its own, but let’s not forget that this gasoline powerplant is assisted by a 1.4kWh electric drive motor that combines for a net 188 horsepower during normal driving and 195 horsepower for short distances in charge depletion mode. A continuously variable transmission (CVT) drives the front wheels, as is the norm in this class.

As per usual with CVTs, the engine drones a bit at full throttle, but its performance from standstill to highway speeds, and then during passing maneuvers is more than adequate. Likewise the Fusion Hybrid feels solidly planted to the road surface when moving quickly, absorbing pavement irregularities nicely and proving quite capable when straights start to curve. In my notes I wrote, “the ride offers a nice balance of silky smoothness yet taut Germanic firmness,” which pretty well sums it up. Even the electric-assist steering reacts well to driver input, while delivering reasonable levels of feedback. The brakes are strong albeit slightly artificial thanks to their energy regenerative capability, an issue that might have bothered me in a conventionally powered car but one I was glad to look over when it came time to fill this hybrid up.

The good thing about the Fusion Hybrid, mind you, is that it doesn’t ask you to make too many of these types of concessions. As a car it works extremely well, delivering the same level of mid-size interior comfort as the very accommodating conventionally powered Fusion, the only major compromise being a trunk with 340 litres of cargo capacity instead of 453. Still, Ford made sure 60/40 split-folding rear seatbacks can extend that trunk for longer items such as skis and poles, albeit through a narrower opening due to the lithium-ion motive battery’s rear bulkhead location. I could certainly live with this.

And I must admit that I could live with the Fusion Hybrid’s near premium interior too. Soft touch dash surfacing and soft touch door uppers make the car much more appealing front and back, while the armrests are nicely padded for comfort. The standard black fabric seats in my tester were made from a strangely cool eco-friendly woven material that almost seemed like a wet suit or the mesh from a seatbelt, while it matched the high-gloss piano black lacquer on the window switch surrounds and lower central console panel. Piano black lacquer looks nice when new, but long-term durability is questionable as the treatment tends to scratch easily, and it always gets covered in dust and grime. Fortunately the centre stack was finished in a matte grey, and while plain in a fashionably minimalist way, it was very well finished while its touch sensitive controls were very chic.

As with most Fords, my Fusion Hybrid’s graphic interfaces were brilliantly executed. The centre stack incorporates MyFord Touch, the brand’s advanced infotainment system. I’ve always liked it, finding it easy to use thanks to its smart colour-coded quadrant layout, but I’ve read others criticizing it for being confusing. You’ll have to play around with it yourself to see if it suits your own personal logic as well as it does mine. It features the usual vehicle settings adjustments, Sync phone connectivity, climate control adjustments (with heated seat actuation), and audio system controls, plus navigation if so equipped. My Fusion SE included the latter, and it was an excellent system that’s decidedly easier to configure than my phone’s integrated system, plus legal to use while driving. The audio system, also easy to use and with very good sound, enjoys the benefit of an auxiliary plug, two USB inputs, an SD card slot, three audio/video RCA plugs and a 12-volt adapter under the armrest.

As I write this review, new 2014 Fusions remain on dealer lots as the new 2015 model arrives, so for a short time you have the option of getting a deal on the outgoing model or paying a bit more for the newer and slightly improved one. As a heads up, all 2015 Fusions include a rearview camera as standard equipment, while options have been reworked to allow a 10-way power-adjustable driver seat and six-way powered passenger seat in SE trim, even with the aforementioned standard Eco-cloth upholstery. An optional Terracotta interior package for SE and Titanium trims is also available, while new wheels and four new colours complete the transition from old to new.

Don’t lose any sleep choosing between a 2014 or 2015 model, as the latest Fusion Hybrid is a very well made, extremely comfortable, quiet and accommodating four-door sedan that comes very close to premium no matter the model year. It’s priced well against key competitors while delivering better fuel economy, which in the end is exactly why the Fusion Hybrid exists. Before you purchase a hybrid from another maker, be sure to spend some quality time with the new Fusion Hybrid, as it will likely impress.
©(Copyright Canadian Auto Press)
Car Shopping Tools