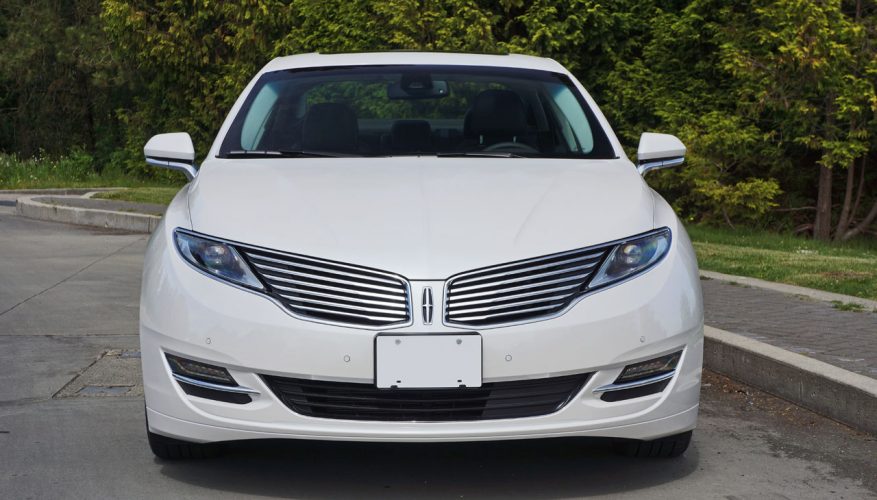 By: Trevor Hofmann
Every time I see a new Lincoln MKZ drive by I turn my head. It’s not the brand’s new signature split-wing grille that captivates me, although there’s nothing wrong with it stylistically, it’s the car’s gracefully sweptback rear proportions capped off with its elegant taillight treatment. From the rear, the MKZ is really something unique and special in a mid-size luxury sedan segment that’s become all too safe and predictable over the years.

I suppose that’s what I like best about Lincoln. In its quest to once again make a strong styling statement of its own and simultaneously gain greater relevance as a luxury brand, its design department hasn’t merely been pushing boundaries but rather removing some of them altogether, boundaries that other carmakers don’t even seem willing to nudge up against. The end result hasn’t always proved palatable to enough premium buyers to reach critical mass in the luxury market (MKT comes to mind), but the new MKZ truly stands out in a very pleasing way.

Also important, any obvious relation to the Ford Fusion it shares underpinnings with is now permanently erased, on the outside anyway. On the inside it’s a bit more challenging for Lincoln to exorcise the ghost of Fusion, with little things like door handles plus power window, power mirror and door lock switchgear being identical, while the steering column stalks aren’t only carried over from the Fusion but are exactly the same as used in the compact Ford Focus. Not quite as noticeable, the upper door panels are similarly styled to those used by Ford in the Fusion, as are the dash and instrument panels, and both steering wheels. Fortunately for Lincoln all the Ford-sourced switchgear is very well executed, and I suppose another positive point is that these shared components provide some commonality for Ford owners moving up to Lincoln. Also good, Lincoln has made sure all the roof pillars are wrapped in the same nice woven fabric as the roofliner, while high quality soft-touch plastics cover just about every other surface that’s not brushed metal in the MKZ’s impressive interior. They’ve even used the nice padded plastic all the way down the dash to the lower dash, and all the way down to lower door panels, while yet more, Lincoln adds a soft-touch padded glovebox lid. The MKZ’s closest competitor, Lexus’ ES 350, can’t boast the same.

Likewise those experienced with the blue-oval brand’s excellent MyFord Touch infotainment system will appreciate MyLincoln Touch, which is virtually the same system with a slightly different interface. Ditto for the superb multi-function display integrated into the primary gauge package, and most other Ford/Lincoln technologies incorporated into the car. In a bit of a twist, Lincoln has tried to differentiate the two by offering a new level of convenience via a pushbutton transmission, an old school but still cool method first offered by Chrysler in 1956 and then by Ford’s Edsel brand in 1957, after which Lincoln got pushbuttons of its own for the 1959 model year. In the MKZ they take some getting used to and can be a bit of a stretch to reach for those with long legs and short arms, in comparison to traditional console or column shift levers, but they’re certainly novel and open up some useful storage on the lower console where the shifter would otherwise be, while providing a clean, uncluttered appearance. That lower console is actually quite high compared to others in the class, visually dividing driver from passenger while connecting directly up with the armrest that only needs to be raised slightly. It’s a “floating” console too, meaning there’s air space below that can come in handy for stowing items those up front may need to access quickly and easily. As mentioned, it’s a great look that should work well for modernists or those just bored with the status quo.

Yes, if there were an award for innovative minimalism, Lincoln would be in the running to win with the MKZ interior. The primary gauges are wonderfully analog, in appearance at least. Their outer rims are traditional white paint on black backgrounds, while their centres, including the needles, are graphics displayed on full-colour TFT screens filled with additional useful information. Lincoln and its Ford parent are leaders in graphic displays, and the MKZ doesn’t disappoint. Front and centre the eight-inch diameter MyLincoln Touch infotainment interface is a thing of full colour beauty, and I for one find its usability better than average and capability excellent, with numerous features to help you get the most out of the car and your connected devices. On the minimalism front, all of the centre stack controls are touch sensitive and work very well, even the sliding volume control that previously gave me trouble in older Lincoln models.

Likewise the MKZ worked perfectly on the open road. Smooth is the operative word. Its 3.7-litre V6 offers plenty of straight-line performance thanks to 300 horsepower and 277 lb-ft of torque and an as-tested curb weight that’s lighter than many with similar size and features at 1,815 kilos (4,002 lbs), while my tester’s optional AWD delivered adhesion to the road no matter the weather conditions. The V6 is one of two optional engines for 2014, base models utilizing a 2.0-litre turbocharged four-cylinder good for 240 horsepower and 270 lb-ft of torque, and significantly better fuel economy. I’d love to try this powertrain out, although I would be surprised if it’s as smooth as the six. Both use a six-speed SelectShift automatic, SelectShift referring to its ability to be driven in manual mode for those moments when you want to exact the most performance out of the engine. Performance for most means letting the engine rev higher for quicker acceleration or alternatively to maintain revs through a tight set of corners, something the MKZ does very well. While I enjoyed such rare occasions, I find manual mode best for eking out more from a tank of gas, short shifting by flicking the right-side paddle even sooner than the transmission would if left to its own devices. And yes, you heard me right. The MKZ comes standard with column-mounted paddle shifters, a rarity even in its luxury class.

While such sporty features are always welcome, after only a few minutes behind the wheel it became apparent that Lincoln is targeting the aforementioned Lexus when it comes to driving dynamics. Comfort is definitely the car’s objective, with handling of secondary concern. First off, the steering wheel is a bit thinner than the class norm, but I didn’t mind all that much because I have relatively small hands. Around town the MKZ is responsive, with light, easy steering and nimble handling, while it’s a dream on the highway where it feels more planted than say, the equivalent Buick. Then again, that Buick is (ahem) more fun to drive. The MKZ is wonderfully quiet though, unless you’re opening it up at which point the V6 takes on a wonderfully ferocious sound, but all in all it drives more like a nicely finished Fusion than one of the Germans it’s pegged against, despite a similar MacPherson strut front and multi-link rear fully independent suspension set-up as its Teutonic rivals. While there’s nothing wrong with its comfort-biased tuning (it’s worked well enough for the aforementioned Lexus after all), it’s the driving experience that truly sets cars like the BMW 3 Series and Mercedes-Benz C-Class apart from mainstream four-door sedans. There’s a feeling of solidity to them, the way they go over dips and bumps and the way they take to the corners, especially if those corners are strewn with dips and bumps. The MKZ is not quite there.

My tester also included navigation with turn-by-turn directions as well as 3D mapping, which had me thinking it came with the optional $2,555 Reserve package that also adds a real wood-infused steering wheel, a powered tilt and telescopic steering column, an auto-dimming driver’s side mirror, a rearview camera system, rear parking sonar, perforated leather seats with heated and cooled comfort up front, and ambient lighting. I was wrong about the Reserve package, as my MKZ actually featured the $4,995 Preferred option package that includes all of the above plus a heated steering wheel, a fabulous sounding 700-watt, 14-channel, 14-speaker THX audio system, a 110-volt power outlet at the rear of the centre console, heated rear seats, a powered trunk lid with full up/down functionality, blind spot detection with cross-traffic alert, 19-inch alloy wheels, and the 3.7-litre V6 standard. It’s only is available with either the regular moonroof or the panoramic glass roof, not included in the package price, my tester including the former.

The regular sunroof costs an extra $1,600 while the panoramic glass roof will set you back $3,450. Additional standalone options include many of the options that come in the aforementioned packages plus a number of 18- and 19-inch alloy wheels. An aluminum trim package is also available, as is a powered rear sunshade, and exclusive rear inflatable seatbelts. Lastly, a $2,450 Technology package adds adaptive cruise control, collision warning with brake support, lane keeping assist, active park assist, front parking sonar, auto high beams, and rain-sensing wipers.

A set of 60/40 split-folding rear seatbacks comes standard, increasing the load capacity of the large 436-litre trunk. Likewise the MKZ’s interior is much more accommodating than any of its German rivals, especially in back where rear passengers will find themselves with room enough to stretch out.

Practicalities in mind, the MKZ is also quite fuel efficient for its size, my V6-powered tester getting a claimed 11.6 L/100km in the city, 7.8 on the highway and 9.9 combined. This is where the base direct-injected turbocharged four-cylinder shines. If driven conservatively Lincoln estimates 9.2 city, 5.9 highway and 7.7 combined, whereas the MKZ Hybrid, which incidentally is priced exactly the same as the base four-cylinder, gets a 5.1, 5.3 and 5.2 claimed rating.

As you can likely appreciate, it didn’t take me long to warm up to the MKZ. It’s styling had me at hello, and its impressive quality and full load of top-tier features kept me completely engaged even if the driving experience didn’t. All in all, the MKZ ups the Lincoln cool factor times a million. Now we’ll have to see if the calm, cool and collected Matthew McConaughey, the brand’s new spokesman, can add to the lustre and give Lincoln the attention it deserves.
©(Copyright Canadian Auto Press)
Car Shopping Tools