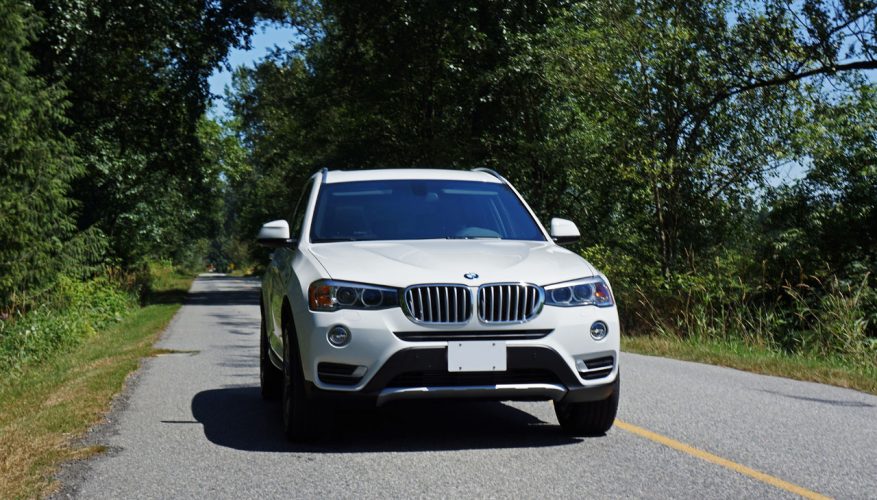 By: Trevor Hofmann
If there’s a vehicle in BMW’s lineup that’s shown the most consistently steady improvement since inception it’s the X3. I was on the original model’s press trip in Spain way back in the fall of 2003, and while I was impressed with its performance, the ride was a tad on the firm side and interior quality wasn’t quite what I had hoped for. With each new generation BMW has refined its compact crossover, so that now with this entirely new 2015 model it comes so close to the quality of its larger X5 brother that the only reason to move up to the larger model is size and optional V8 performance.

Powertrains in mind, another consideration that bodes well for the 2015 X3 is its powerful, fuel-efficient clean diesel, previously only available with the X5 in BMW’s sport activity vehicle offerings. Switch the console-mounted driver select mode toggle forward to the Sport position and the 2.0-litre turbocharged four-cylinder’s 280 lb-ft of ready and willing torque reacts to throttle input almost immediately, charging the little CUV forward with seemingly little effort as revs only need to reach 1,750 rpm to achieve maximum thrust. Its horsepower rating of only 181 at 4,000 rpm shouldn’t be considered when comparing to competitor’s gasoline engines, as power is only needed when already underway, and there’s no shortage when up to speed.

When comparing those conventionally powered competitors, also take note of the fuel economy. BMW’s own xDrive28i with its 2.0-litre turbocharged gasoline-powered alternative is plenty powerful too, at 241 horsepower and 258 lb-ft of torque from only 1,450 rpm, plus it’s one of the thriftiest in its segment at a claimed 11.1 L/100km in the city, 8.4 on the highway and 9.9 combined, but while it can sprint to 100km/h in a mere 6.5 seconds compared to the xDrive28d’s 8.3, the base X3 can’t get anywhere near the diesel’s claimed fuel economy rating of 8.6 city, 6.9 highway and 7.9 combined. BMW makes a 300 horsepower 3.0-litre turbocharged inline-six-infused X3 too, that launches to 100km/h in a sports car-quick 5.6 seconds, although the penalty exacted is 12.5 city, 8.7 highway, and 10.8 combined. All things considered, none of these sets of numbers would be difficult for most premium buyers to live with, and such performance does keep the love alive long after the honeymoon is over. Then again, so does great fuel economy. It all depends on what type of performance you deem most important.

All X3 models get a best of both worlds eight-speed automatic transmission, which provides quick shifting capability between short efficient intervals, maximizing the engine’s sweet spot while minimizing the need to rev the engine too high during regular driving, thus saving fuel.

I mentioned Sport mode earlier, but it should be noted that BMW also provides an Eco Pro mode with the fuel-saving assistance of an idle-stop system as well as regenerative brakes for those times when getting their quickly isn’t as important as reducing one’s impact on terra firma.

It’s these more relaxed moments when you can truly appreciate all BMW has done with the X3’s interior. Gone are the hard plastics previously criticized by yours truly and other auto scribes, now replaced with a level of luxury befitting the blue and white roundel. Soft touch surfaces cover the entire dash, even down to its lower extremities, as well as the lower part of the centre console, with only the lower door panels made of harder plastic, but nicely textured, good looking stuff. There’s lots of genuine brushed metal too, while gloss piano black plastic surfacing glitzes up the dash and centre stack on base models. Looking around, it seems like BMW has missed nothing in the nicely outfitted X3 on loan, but I was shocked to find out that the leather-like interior is actually vinyl. Faux leather is not unusual in this class, but the quality feel of this pleather upholstery was surprising.

Speaking of nothing missed, my X3 tester was hardly base. The first thing I noticed was a gorgeous set of 19-inch Y-spoke rims. The base model comes with 19s too, but these unique rims require an upgrade to the $3,950 Premium Package Essentials, at least, which includes a rearview camera, front and rear parking sonar, panoramic sunroof, powered rear liftgate, and the Light Package that adds active LED headlamps with high-beam assist and otherwise as a standalone package costs $2,000 all on its own. But also I couldn’t help but notice LED fog lights, satin aluminum roof rails, auto-dimming exterior mirrors, proximity sensing access with pushbutton ignition, a navigation system and a Harmon/Kardon audio upgrade with satellite radio, all of which meant that the $6,000 Premium Package Enhanced (a $2,050 charge over and above the Premium Package Essentials) was part of this X3’s feature set too.

Incidentally, if you want leather it can be had as a standalone option for $1,500, while a good choice with any BMW is the M Sport line upgrade, $4,400 on the X3 28d, which adds the aforementioned leather upholstery, plus brushed aluminum trim, an M steering wheel (which unfortunately deletes the standard heated steering wheel), steering wheel-mounted shifter paddles, sport seats, unique 19-inch M double-spoke alloys, the M aerodynamics package, high gloss black side window trim and high gloss black roof rails, plus the M Sport package.

Other packages that need mention include the $900 Performance Package that first requires the above mentioned M Sport Line package and then adds a sport suspension, variable sport steering, and performance control, the latter using the DSC sensors and the braking system to enhance vehicle dynamics by variably distributing power to the inside wheel during cornering. Lastly, the $1,600 Technology Package adds lane departure and collision warning, active blind-spot detection, and high-beam assist.

While you might have found it a bit odd that proximity sensing access and a rearview camera aren’t standard, which is often the case in the premium sector, BMW makes up for this with a standard features menu boasting some unusually welcome inclusions, such as the aforementioned heated steering wheel, dynamic cruise control, bi-xenon HID headlights with LED corona rings, and an innovative Heat at Rest system that uses residual engine heat to warm the cabin while the X3 is in idle-stop mode. Additionally there is the assortment of fuel-saving green items I spoke of before such as automatic start stop and brake energy regeneration. Along with these the standard feature set includes the expected leather-wrapped multi-function steering wheel and shift knob, automatic headlamps, rain-sensing wipers, an auto-dimming rearview mirror, dual-zone automatic climate control, power-adjustable front seats with heated cushions, a display audio system with twin subwoofers, aux and USB ports and Bluetooth phone connectivity with streaming audio, privacy glass, an alarm system, fog lamps, runflat tires, and the list goes on and on for a base price that starts at just $45,000 plus $2,095 for freight and pre-delivery prep.

By the way, the powered liftgate I listed before is an impressive piece of engineering designed to make life a lot easier while simultaneously wowing your neighbours. While you can open it via a button inside, the remote key fob or the back latch, it can also be opened with a simple kick under the bumper. This isn’t the first of its type on the market, but BMW’s kick motion is a lot easier to do when arms are full than Ford/Lincoln’s sideways swipe motion.

Doing so opens up a sizable cargo area, boasting 550 litres behind the 40/20/40 split-folding rear seatbacks, or 1,600 litres if these are laid flat. This 40/20/40 system is more utile than the usual 60/40 split, by the way, as you can accommodate four full-size adults by putting two in the rear outboard seats and then laying all skis and poles down the middle, while everyone can warm up after a day on the slopes via front and rear seat heaters if so equipped. The seats fold 60/40 too, although you can choose either side so that awkward loads that may not fit in otherwise can be loaded. Additionally, under the cargo floor is a nifty storage tray with cutouts for stowing valuables away from prying eyes, ideal for road trips.

And you’ll want to be having plenty of these, especially into the mountains where you’ll be reminded of a key reason why many choose a BMW over some other luxury brand in the first place. The X3’s handling is awe-inspiring. Certainly it’s taller than a 3 Series Touring (wagon) and therefore won’t stay quite as flat to the road surface when pushing hard, but it’s as good as crossovers with this much utility get. I enjoyed every moment behind the wheel, whether snaking through backcountry roads, cruising at highway speeds or just dawdling along in city traffic, where the new X3 is decidedly more comfortable than the CUV it replaces.

If you’ve looked at the X3 before, but weren’t captivated by its styling, refinement, ride quality or any other aspect, I urge you to look at the new 2015 model and then take it for a drive. It’s a big improvement over the outgoing X3 in every respect, and truly deserving of its prestigious Bayerische Motoren Werke pedigree.
©(Copyright Canadian Auto Press)
Car Shopping Tools