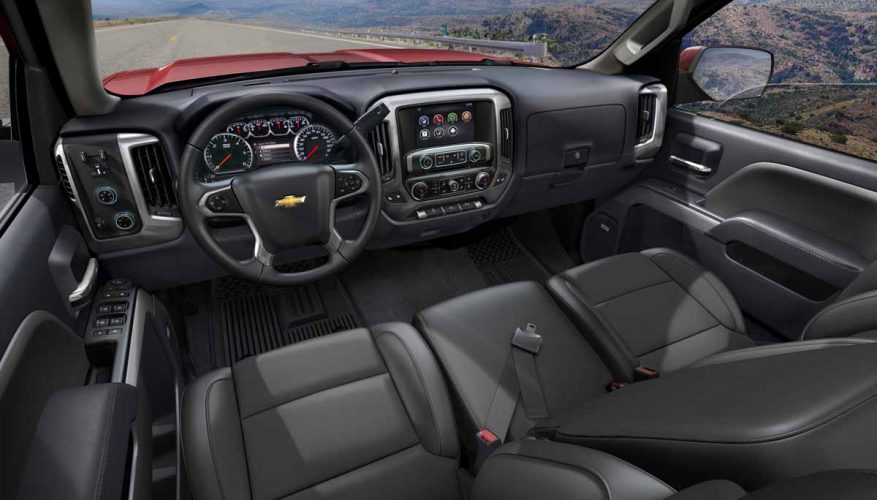 By: Trevor Hofmann
In the light-duty pickup truck arena, the big three can’t be seen as behind the times. Leave such mundanities as normally aspirated V8 power conjoined with six-speed automatic transmissions to Toyota and Nissan, which don’t compete as fiercely for top dog as Ford, GM or Ram. It’s ok to have one of the above, but you’d better include some innovative tech under the hood and elsewhere if you want to be taken seriously or your loyal truck owners will start feel inadequate.

Ford F-150 owners should be feeling particularly virile these days, with the brand’s EcoBoost turbocharged V6 giving them powertrain leadership bragging rights and now an all-new lightweight aluminum body shell seemingly more supercar than super-duty, while Ram owners will be feeling pretty smug about the new 1500’s ultra-efficient and powerful EcoDiesel V6, eight-speed automatic gearbox and air suspension. How about Chevy and GMC light truck owners? The Silverado and Sierra are excellent pickup trucks with superb interior refinement for the class, but as far as powertrains they’re still duking it out with normally aspirated V6 and V8 engines mated to six-speed automatic gearboxes, but not for long says a recent General Motors press release.

Chevrolet and GMC have confirmed a new eight-speed automatic transmission as standard equipment with the upcoming 2015 Chevrolet Silverado and GMC Sierra when fitted with the optional 6.2-litre EcoTec3 V8, not to mention the GMC Yukon Denali and Yukon XL Denali models with the same engine. An internally developed transmission, the Hydra-Matic 8L90 eight-speed is about the same size and weight as the Hydra-Matic 6L80 six-speed automatic it optionally replaces, which means it’ll be an easy fit and won’t exact any weight penalties that would otherwise go against fuel economy.

Fuel efficiency is the main reason for the change to eight forward cogs, the new gearbox offering a wider overall gear ratio with taller final drives and the capability of numerically lower rear axle ratios for reduced engine revs on the highway, while a numerically higher first gear ratio aids in acceleration from standstill.

GM’s 4.3-litre V6 and 5.3-litre V8 engines will still come mated to the six-speed automatic, so for the time being the Detroit automaker doesn’t have a complete answer to its main rivals’ more progressive powertrains.

The new transmission will begin production sometime in Q4 this year, while fuel economy estimates should be announced just ahead of availability.
©(Copyright Canadian Auto Press)
Car Shopping Tools