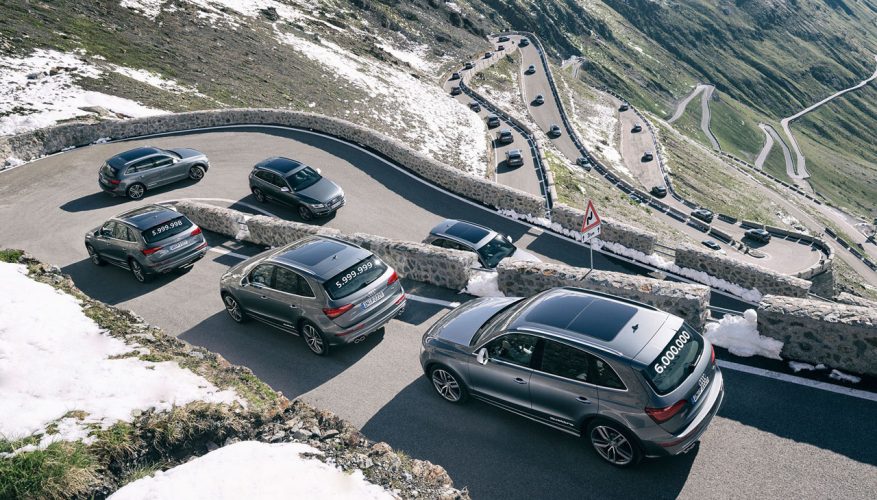 By: Trevor Hofmann
Today, think of Audi and most who know the brand will also think of its Quattro all-wheel drive system. These fans may or may not know that Audi was the first to offer a modern-day permanent all-wheel drive system in a passenger car 34 years ago, a technology that’s been seen as such an immense benefit to road cars in cold weather climates that most models sold in Canada by such rear-drive stalwarts as BMW and Mercedes-Benz are now all-wheel drive too, while Porsche offers optional all-wheel drive in every vehicle it produces except for its Boxster and Cayman.

Tally up the number of all-wheel drive models these rivals have individually produced over the last three and a half decades and it won’t sum up to six million, however, the number of Quattro systems built by Audi since it introduced the drivetrain on its sporty Quattro Coupe way back in 1980.

“Dynamism and sportiness, the utmost technical precision and safety – that’s what Audi’s quattro technology stands for,” said Dr. Hubert Waltl, Board of Management Member for Production at AUDI AG. “More than 30 years ago, it was recognized as a pioneering accomplishment; today, it is synonymous with technical progress.”

Interestingly, the Ingolstadt-based brand’s most recent million was achieved in a mere one and a half years, with 710,095 Quattro-equipped Audis rolling off the line in 2013 alone. According to the German company, almost every second Audi is equipped with Quattro technology, or more specifically 44-percent of all Audis sold last year. Audi says that its Quattro all-wheel drive system is particularly popular in the U.S., Canada, Russia and the Middle East.

“Our colleagues’ expertise in the field of all-wheel drive is impressive; it demonstrates our ‘Vorsprung durch Technik’ and thus makes an important contribution to the brand’s image,” said Peter Mosch, Chairman of Audi’s General Works Council. “Without our qualified and flexible team, this milestone would not have been possible in such a short time.”

And just which Audi model was responsible for hitting the six-millionth Quattro landmark? A Monsoon Grey Metallic SQ5 3.0 TDI compact utility that came down the line on Friday and is now on its way to new owners in the U.S. They’ll want to keep the 6,000,000 decal fixed to the rear window for sure.
©(Copyright Canadian Auto Press)
Car Shopping Tools