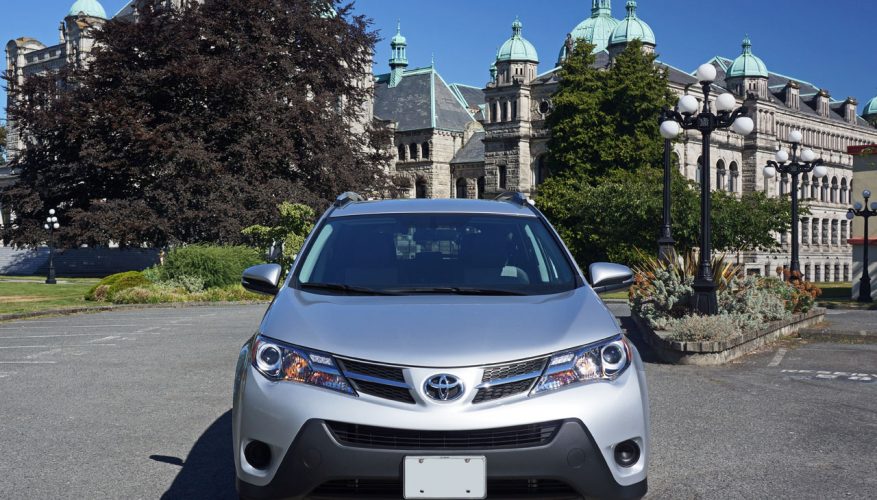 By: Trevor Hofmann
I wasn’t in the automotive journalism field when the first RAV4 came into existence way back in 1994. I just remember being amazed by the little compact. I felt it was a lot cuter, a bit funkier and generally better looking than the first Honda CR-V that followed a year later, but both immediately caught on with the buying public and the rest is history.

That RAV4 was a revolutionary vehicle for the time. Certainly there had been small SUVs prior to ’94; Suzuki’s original LJ80 that first appeared in 1979 comes to mind, followed up with the same Japanese brand’s Samurai in 1985, the Sidekick in 1988 and the Vitara in 1999. What made that first RAV4 different was its car-based platform architecture, a unibody design we now refer to as a crossover SUV or CUV. That Toyota’s RAV4 and others like it now make up one of the fastest growing vehicle segments in North America, and Suzuki, while continuing to make body-on-frame SUVs to this day no longer sells any road-worthy four-wheel vehicles in the U.S. or Canada, says everything we need to know about how our buying habits have changed since 1994.

Even the RAV4 has become more car-like since its introduction. The first one was partially responsible for the term “cute ute”, which was probably why Toyota toughened up the look of the second-generation RAV4 in 2000, a vehicle more appealing to men. After I drove one on the Canadian launch program in and around Whistler, BC, I was so impressed that I urged my dad to test one out, and subsequently he and his wife purchased it. It served them well up until a couple of years ago. Toyota replaced that second-gen RAV4 with a similarly styled albeit larger third version in 2005, one with such a powerful optional V6 that Toyota created a mock drag strip complete with a digital timer to test out its acceleration during the launch program. This latest fourth-generation RAV4 that arrived almost two years ago was and continues to be a much more refined machine, eschewing previous models’ SUV-like styling for a sophisticated premium crossover appearance and much better daily livability.

My only complaint about the old RAV4 was its side-swinging rear door, necessary to hold its full-size spare tire. I don’t mind these types of doors so much as I found it near impossible to get anything into the cargo area while parked curbside, the RAV’s rear door hinges located ideally for the Japanese market which would have you parking on the other side of the road. Here, the door blocked access to and from the sidewalk, a major inconvenience. The spare is now located under the cargo floor, allowing a conventional swing-up liftgate that not only completely gets out of the way while loading, but provides a little shelter from the storm when doing so.

Cargo in mind, I needed to head to my storage locker to pick up a rather tall Ikea bookcase while the RAV was in my possession, but first had to figure out if it could accommodate with the liftgate completely closed. Knowing that we also had a new Mitsubishi Outlander in our test fleet for the week and having seen the two vehicles side-by-side I immediately thought the 86-millimetre (3.4-inch) longer Mitsu would hold more cargo. How looks can be deceiving. Where the Outlander measures up well against some of its competitors with a maximum of 1,792 litres available when its two rear rows are folded flat, the RAV4 is good for 2,080 litres of cargo when its single rear row gets the horizontal treatment. That’s a sizable 288 litres of additional cargo space behind the rear seats. It’s a tad larger than the old RAV4 too, although Toyota chose not to equip the new model with an optional third row this time around. Incidentally, the RAV can stow up to 1,090 litres of gear behind the second row, and if all this isn’t large enough for your requirements, it’ll tow a 680-kilo (1,500-lb) trailer in back.

Like the new RAV’s exterior design, its cabin has been totally transformed. Once again the overall look is more sophisticated, with materials quite a bit nicer on base LE models and a lot more upscale in XLE and Limited trims. No matter the trim level, the RAV’s sophistication comes from the design’s various angular metallic shapes, the most prominent ahead of the driver, shrouding the primary gauges, with another metallic beam spanning the leading edge of the entire instrument panel, a line that visually continues onto the door uppers and then down the sharply raked door handles, which meld into dark plastic before continuing down to the bottom of each door panel. As taken individually, each door panel is a piece of modern art.

Instead of fake wood or annoying piano black plastic that scratches easily and collects dust continually, Toyota has trimmed the power window switch panels and lower console surface in a carbon-fibre patterned black matte plastic, modernizing its appearance. Door panels aside, the RAV’s most interesting interior design element is a thick dash bolster that runs from the passenger’s door to just past the centre stack, dividing the latter into upper and lower parts. This is padded with a stitched leather-like material in XLE and Limited models, although was constructed from a harder rubberized plastic in my base LE tester. Even on the base model this feature looks good, and throughout the rest of the cabin there are nicely woven cloth inserts on the doors and two-tone seats, a similar premium-level woven fabric for the roofliner, plus good quality switchgear and other impressive finishings.

I’ve made mention of my tester being a base model, but I must clarify it had been improved via the $1,700 optional Upgrade Package, which adds a superb looking and easy to use 6.1-inch display audio system with two additional stereo speakers, voice recognition controls, and an integrated back-up camera, plus heated front seats, a cargo cover, rear privacy glass, and silver painted roof rails, bringing the price up from $23,870 for the base LE FWD, to $25,570, plus $1,690 for freight and pre-delivery prep. I almost forgot that my test RAV also included all-wheel drive, upping the price by another $2,265 to $27,835.

So what comes with the base LE? Mostly it’s the usual features, although there are a few surprises too. Expected are such items as keyless remote entry, powered windows with driver’s side down, and powered and heated exterior mirrors, but mirror caps with integrated turn signals on the base model is not the norm. Back to the class average, the RAV4 also gets tilt and telescoping steering with audio and Bluetooth controls, air conditioning, a four-speaker AM/FM/CD/MP3/WMA audio system with aux and USB inputs, plus cruise control, intermittent wipers, 60/40 split-folding rear seatbacks, ABS-enhanced four-wheel disc brakes, traction and stability control, and a full suite of airbags, but unusually welcome is a standard driver’s knee airbag and a host of additional safety features, such as electronic brakeforce distribution (EBD), brake assist (BA), and Smart Stop Technology (SST), the latter which cuts power to the engine when panic braking. A handy Eco drive monitor is included in the base model too, as are colour-keyed door handles (newly standard this year), windshield acoustic glass, and wheel covers on 17-inch steel rims wrapped in 225/65R17 all-season tires.

All RAV4s get the same energetic 2.5-litre four-cylinder engine with 16-valves, dual-overhead cams, and variable valve timing that’s good for 176 horsepower at 6,000 rpm and 172 lb-ft of torque at 4,100 rpm, as well as Tier 2 Bin 5 emissions certification. The engine pulls strongly from standstill and has plenty of power for highway passing, while the standard six-speed automatic transmission goes about its business almost unnoticed, except when choosing to row it through its sequential gears via the shift lever.

While the RAV4 can manage soft-duty off-roading, its 159 millimetres (6.3 inches) of ground clearance and lack of a low-range gearset mean that seriously rough stuff is off limits, but that was never the intention of the RAV’s designers. Rather, its low ground clearance combines with optional Active Torque Control-enhanced AWD and a standard fully independent MacPherson strut front and double-wishbone rear suspension with stabilizer bars at both ends for good high-speed road holding, even on tight, curvy roads, helped along by those 17-inch wheels and tires I mentioned before. Its electric power steering is surprisingly responsive to turn-in, although clear and concise feedback isn’t its forte, but the RAV’s impressively smooth ride is the consolation prize. All trims but the AWD Limited benefit from a tight 10.6-metre (34.8-foot) turning circle, making it an ideal inner city companion.

The RAV’s highway fuel economy might make you even fonder for the little CUV, with the base front-drive model getting a claimed 6.4 L/100km according to Transport Canada, while the same model achieves an estimated 8.7 city rating and 7.7 combined. The all-wheel drive RAV4 I tested receives an claimed 9.1 city, 6.8 highway and 8.1 rating, whereas the AWD Limited’s official numbers are 9.3 city, 6.8 highway and 8.2 combined. No matter the trim, fuel economy isn’t the bane of this compact CUV.

Truth being told, after a week behind the wheel that included a trip to beautiful Victoria, BC, I have zero complaints. For my previous 2013 RAV4 review I mentioned that I didn’t like the placement of some secondary switchgear that gets hidden below the aforementioned bolster, but it didn’t bother me this time around. FYI, Toyota places the aux and USB plugs, rear wiper, seat heater buttons, plus the Eco and Sport mode buttons down there and they’re a bit difficult to see while driving.

Visibility out all the windows is excellent, however, and the seats, front and back, are very comfortable and plenty supportive. Then again, something Toyota could improve is the way the 60/40-split rear seatbacks fold. There are no levers in back to release them, forcing you to walk around the side of the vehicle to tumble them forward via the rear doors. They’re easy to flip down though, and as mentioned earlier, open up a cavernous cargo area highlighted by a totally flat load floor.

Other than a few small details the latest RAV4 is very easy to live with, and a big improvement over the model it replaces. Those moving up from an older RAV will certainly appreciate all Toyota has done to modernize their favourite compact CUV, while it’s easily good enough to woo many away from segment rivals that haven’t done as good a job delivering the goods.