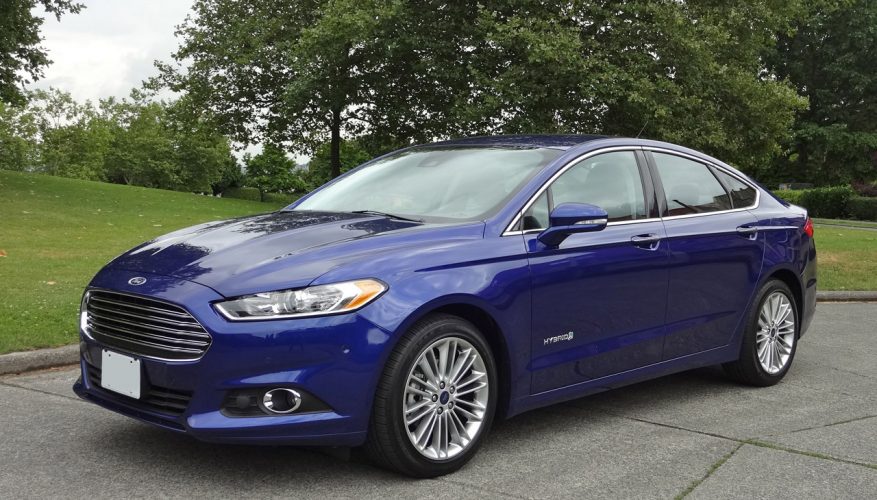 By: Simon Hill
Following its ground-up redesign for the 2013 model year, Ford’s Fusion Hybrid has received only a few relatively minor changes over the past couple of years. Key amongst these changes was the introduction for the 2014 model year of a new entry-level Hybrid S trim level that jettisoned the Hybrid SE’s power seats, rear seat HVAC ducts, rear seat armrest and cupholders, rear floor mats, compass, exterior temperature indicator, keyless-entry pad, satellite radio, and heated side mirrors with approach lights. It also restricts the options list, meaning you can’t get the MyFord Touch infotainment system or any of the company’s sophisticated driver assistance equipment with the S trim. 2014 also saw the introduction of available inflatable rear seatbelts (optional on all models), a heated steering wheel (optional on SE and Titanium models), and ventilated front seats (optional on Titanium models).

For 2015 a rearview camera has been made standard across the range, and the available equipment lists have been tweaked to include a 10-way driver’s seat and six-way power passenger’s seat in the SE trim (in standard Eco-cloth upholstery), four new exterior colours, new wheel styles, and an available Terracotta interior package for SE and Titanium trims.

Ford is justifiably proud of its MyTouch infotainment system and driver assistance technologies, so it was hardly surprising that instead of putting me into a Fusion Hybrid S model, the company instead set me up for a week with a well-optional Fusion Hybrid SE.

Externally, there’s little to distinguish the Fusion Hybrid from any of the conventionally powered Fusions. Like the regular Fusion, the Fusion Hybrid has a sleek profile and a slightly aggressive overall appearance, the latter thanks to Ford’s now ubiquitous Aston Martin-inspired trapezoidal grille.

Inside, there’s a unique instrument panel with some configurable hybrid information displays, but other than that the Fusion Hybrid is just a perfectly normal and pleasant driving experience. The only real concession at all is a slight loss of trunk space due to the presence of the lithium-ion motive battery, which forms a bit of a shelf against the back seat, reducing the available cargo capacity from 453 litres to a still reasonable 340 litres. The hybrid still gets a pass-through (albeit a little height-restricted) with 60/40 split folding rear seats.

Under the hood, the 2015 Fusion Hybrid has a 2.0-litre Atkinson cycle engine that produces 141 horsepower and 129 lb-ft of torque and is assisted by an electric drive motor to make a total of 188 available horsepower in normal driving and 195 horsepower for brief periods in charge depletion mode. Power is delivered to the front wheels via an automatic CVT transmission.

Push the Fusion Hybrid hard and the gasoline engine will make its presence known thanks to its somewhat hollow-sounding exhaust, but will move the car along with reasonable hustle, getting from 0-100km/h in about 8.5 seconds. Drive with a little less aggression and the hybrid system will make its presence known in a much more rewarding fashion, delivering impressive fuel economy figures. Official city/highway ratings for the Fusion Hybrid are 5.4 / 5.8 L/100km, and the numbers I saw were right in line with this: the test car was showing a 6.0 L/100km long-term average when I picked it up, and I matched that almost exactly, using an average of 5.9 L/100km during my time with the car. Not bad for mixed driving in a roomy family car!

In terms of ride and handling the Fusion Hybrid is composed and competent, and it soaks up most bumps without fuss. The electric-assist steering provides reasonably decent feedback, and in normal circumstances the car is exceptionally quiet and amply powerful. Drive it like a normal car and it really does feel perfectly normal, with the added bonus that whenever you need to step on the brakes, that energy is recaptured to help you accelerate again.

Inside, the Fusion Hybrid is comfortable, spacious and surprisingly luxurious when loaded up with options like my SE test car was. The materials are all good-looking and well fitted, and there are soft-touch surfaces wherever you’re likely to notice, including the door uppers and inserts, the dash top, and the console armrest. Painted metallic trim and stylized woodgrain-effect inserts provide visual interest.

The optional MyFord Touch infotainment system offers impressive functionality, although the touch-screen buttons can be a bit fiddly to operate. I also discovered a glitch at one point when I inserted a USB media drive, which caused two different sets of text to get overlaid in the “Entertainment” portion of the home menu, rendering it illegible. It didn’t affect the system’s operation, and it cleared up when I removed the drive, so I’d have to count it as a very minor issue.

At this price and with these features the Fusion Hybrid is a near-luxury family sedan that offers exceptional fuel economy yet remains reasonably price-competitive with similarly equipped conventional cars. For families who rack up a lot of city mileage, the extra upfront costs could easily be paid back in fuel savings over a few years of ownership, and in the meantime the Fusion Hybrid SE offers a particularly quiet, comfortable and well-equipped driving experience.