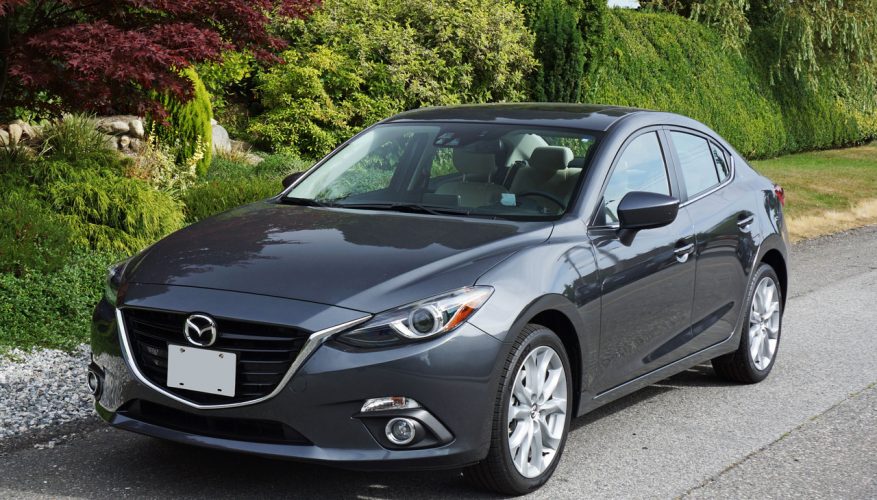 By: Trevor Hofmann
Want a BMW 3 Series but can’t quite afford it? No problem. Mazda has the next best thing: the new 3 GT.

Of course I say that with tongue in cheek, but then again I’m only half joking. The new 2014 Mazda3, especially when kitted out in top-line GT trim, looks and feels a lot more upscale than most in the mainstream compact class. What’s more, it delivers sportier performance than the majority of its rivals too. It’s the 3 series for those on a budget. No wonder Mazda chose 3 for its numerical designation so many years ago.

Actually, the Mazda3 hasn’t been the Mazda3 for all that long. The current designation only came into existence 11 years ago for the 2004 model year. Happy belated anniversary, by the way. What is the 10-year anniversary present anyway? Diamonds? Hmmm… I think the traditional gift of tin or aluminum is more fitting, but I seriously digress. Prior to the 3, the misspelled Protegé was Mazda’s compact model, and before that it was the 323. Ahead of the 323, which boasted a fabulous turbocharged all-wheel drive version that was like a road-ready rally car, was the GLC (Great Little Car), and before this was the now collectable rotary-powered RX-3 and even better, the lighter-weight and much more collectable RX-2. Those who remember back to these various classics will also remember that while they were all well designed, practical little runabouts, each was also considered the sportier alternative within its compact class. As mentioned, the same holds true today.

The Mazda3 GT is a fun car to drive. Its DOHC, 16-valve, direct-injected 2.5-litre four-cylinder engine creates up to 184 horsepower and 185 lb-ft of torque, while a quick-shifting six-speed automatic transmission with an engaging set of paddle shifters comes standard. Did I say that right? An automatic, standard in Mazda’s sportiest 3? Yes, and truly this is my only complaint about this car. That Mazda didn’t even think to offer the much more engaging six-speed manual from the base GX and mid-grade GS in its sportiest top-line 3 GT is downright strange, especially since the Mazdaspeed3 is no longer in the lineup. There’s good news on the horizon, however, as the 2015 3 GT will reportedly get a six-speed manual option, which means that Mazda’s loyal performance enthusiast following won’t have to wait until the next Mazdaspeed3 arrives sometime in 2016 to row a short-throw, lightweight Skyactive stick shift in a performance-tuned 3.

While the current Mazda3 GT would certainly be more fun to drive if offered with a manual, the six-speed autobox is very good as far as torque-converted automatics go. I say this because some competitors in this segment offer quicker-shifting dual-clutch automated gearboxes that are inherently sportier, while others install continuously variable transmissions (CVTs) that are regularly lambasted by auto critics and the buying public alike for being less enjoyable to drive, so the 3 GT strikes a middle ground. There’s a Sport button that allows for higher less fuel-conscious revs before quicker more engaging shifts, but I must admit to leaving it in regular mode more often, in order to take advantage of the car’s excellent fuel economy.

The 2.5 doesn’t eke as much out of the 3’s 50-litre tank of gas as the base model’s 2.0, but both rate well against comparatively powered competition. FYI, the thriftiest 3 is the base engine with the optional automatic rated at 6.7 L/100km city and 4.7 highway, but the GT’s 2.5-litre four isn’t much thirstier at a claimed 7.2 city and 5.1 highway, or 7.1 and 5.0 as tested with the i-ELOOP brake energy recovery system.

This last item is just one of many fuel- and emissions-friendly components to Mazda’s unique approach to saving at the pump while going green, dubbed Skyactiv. It’s a philosophy the Japanese automaker calls Jinba Ittai, or more specifically in characters, 人馬一体, which directly translated means person [and] horse [as] one body. Mazda first adopted this term, which is normally used for Yabusame (Japanese mounted archery), to describe a driver’s connection to its MX-5 roadster, but now Jinba Ittai takes on a new more holistic meaning for the entire brand. Compared to many hybrids, which can eliminate driving pleasure via aforementioned CVTs and other efficiency-first processes like delaying throttle response, Mazda’s Skyactive approach goes the racing route by significantly increasing engine compression and adding direct-injection to make the most of each burst of fuel, reducing friction in its transmissions and then simplifying for reduced weight, increasing the use of high-strength steel and aluminum in the body structure and undercarriage to reduce overall mass while aiding rigidity, and more. When everything is added up you’ve got a vehicle that can be driven carefully to minimize consumption and pollutants or more aggressively for those adrenalin-inducing moments that Mazdas are famous for.

On that note the chassis does as good a job of managing curves as it soaks up road imperfections. The rack-and-pinion steering gets engine rev-sensing variable power assist that allows for good responsiveness no matter your speed, while the fully independent MacPherson strut front and multi-link rear suspension gets stabilizer bars at both ends to help maintain the car’s composure through tight, fast corners, aided by ABS-enhanced four-wheel disc brakes plus traction and stability control in inclement weather. In my GT tester, all this was supported by a standard set of 18-inch alloys on 215/45R18 all-season rubber for good adhesion to the road.

But there’s more than just performance that makes the Mazda 3 GT special. My tester was a four-door sedan, a five-door liftback appropriately dubbed Mazda3 Sport also available. I’m not sure which one I like better from a styling perspective, as both are very attractive. This is a good problem for Mazda to have. Likewise its interior is a step above most rivals, my tester finished with very upscale tri-tone upholstery that immediately had me feeling like I was driving a premium car. The seat leather, including perforated inserts, was cream-coloured with dark grey highlights, complemented by red stitching that also shows up on the leather-wrapped steering wheel, shifter boot, handbrake handle, plus door and centre armrests. The cream theme is also applied to the door inserts for a cohesive look, while Mazda has decorated the cabin up with tasteful metal brightwork throughout and high-gloss piano black plastic surfaces on the door handle surrounds and lower console surfacing. Finishing everything off are soft-touch plastics on the dash top and door uppers. If you find a better interior in the mainstream compact class, please let me know. I certainly haven’t seen anything that comes close.

Back to that BMW 3 Series comparo, perched atop the dash is a very similarly styled touchscreen infotainment display to the popular premium model, which looks like someone slotted a seven-inch silver-rimmed Samsung Galaxy Tab into a perfectly fitted holder. The look is a bit aftermarket, but cool just the same. Again, if it’s good enough for a Bimmer why should we complain about it in a Mazda3? It’s controlled via a very slick BMW iDrive-esque rotating knob surrounded by menu buttons, plus a radio volume knob that you can adjust without the need to take your eyes from the road. This, of course, is the premise behind the redundant controls on the car’s steering wheel spokes, so we can either appreciate having multiple ways to adjust audio volume or wonder why Mazda has spent money on this double-redundancy.

Adding to the 3 GT’s premium look and feel is a head-up display unit above the primary instruments, also redundant if you just use it for vehicle speed, but quite useful for flicking through the multi-function display unit’s various features via steering wheel toggles. The GT also boasts standard proximity sensing remote access with pushbutton ignition, a nice dual-zone automatic climate control system, three-way front seat heaters, great sounding nine-speaker Bose audio with USB and aux inputs, plus Bluetooth hands-free, voice-activated navigation, a rearview camera, rain-sensing wipers, tilt and telescopic steering, a powered glass sunroof and, just like the base Mazda3 but worthy of mention, a handy sunglass holder in the overhead console. Other standard GT features include bi-xenon HID headlights, LED signature DRLs and LED taillights, plus turn signals on the mirror caps.

Additionally my tester included two packages, the $1,500 Luxury Package boasting the leather upholstery I mentioned before, a six-way powered driver’s seat, auto-dimming rearview mirror, and leather-like rear console lid, plus the $2,500 Technology Package that adds the previously mentioned i-ELOOP regenerative braking system, satellite radio, adaptive headlights, automatic highbeam control, blind spot monitoring with rear cross-traffic alert, lane departure warning, and Smart City Brake Support (SCBS), all for under $30k, or specifically $29,855 before adding on the $1,695 freight and pre-delivery preparation charge. If you don’t need your GT with all these features, the well equipped four-door goes for $25,855 plus freight, while a base Mazda3 GX Sedan starts off at $15,995.

All in all, the 2014 Mazda3 GT combines respectable levels of performance with an impressive suite of Skyactive fuel-saving features, not to mention top-tier safety and what I think is best-in-class luxury. Its superb style is just a bonus.
©(Copyright Canadian Auto Press)
Car Shopping Tools