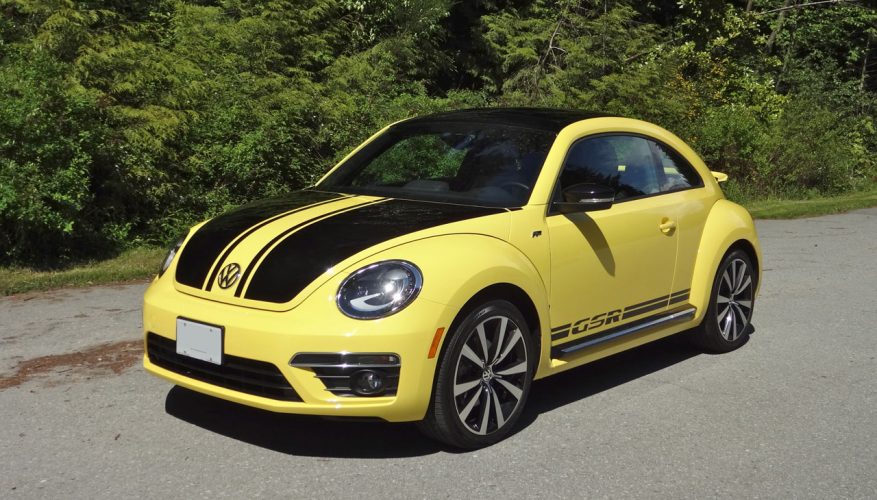 By: Simon Hill
A couple of things about the Volkswagen Beetle GSR: First, yes, it’s loud and showy with its bright yellow-and-black paintwork and bold racing stripes. Second, it comes by its extroverted personality honestly. The GSR pays homage to the 1973 Beetle GSR, a tweaked and tuned version of the original Beetle that was produced in limited numbers (3,500 units to be exact) mostly for the German market.

The original Beetle GSR borrowed its distinctive colour scheme – a yellow body with black hood and engine cover – from the Salzburg Rallye Beetles of Austria, and took its name from the same colour scheme: GSR stands for Gelb Schwarzer Renner, which translates as Yellow Black Racer. How’s that for honesty?

While the original GSR had a naturally-aspirated, air-cooled 1.6-litre motor that made all of 50 horsepower, the 2014 Beetle GSR gets Volkswagen’s turbocharged 2.0TSI four-cylinder engine, cranking out a comparatively massive 210 horsepower and 207 lb-ft of torque. And while the original GSR was strictly a shift-it-yourself affair, the 2014 GSR is available with either a standard-equipment six-speed manual transmission or an optional six-speed dual-clutch DSG automatic.

In most other respects the GSR is the same as the regular Beetle, and there’s nothing wrong with that. The interior uses mostly rigid plastics (soft-touch materials are limited to the console armrest), but the materials all look good and the fit and finish is excellent. I loved the yellow stitch detailing on the seats and steering wheel, and while personally I would’ve quite liked to have had the glovebox lid and door uppers painted body colour (yellow) as in standard Beetles, the conservative look achieved using gloss black and pewter trim does have a sporty appeal.

I found the front sport seats superlatively comfortable, and there’s adequate room in the back to carry two adults in reasonable comfort, at least on short trips. A total of 440 litres of cargo capacity helps to make the Beetle a practical conveyance, and the rear seats fold to provide 850 litres of total luggage space (although the seats don’t fold entirely flat, so sliding large items in the back can be tricky). In terms of in-cabin storage, there’s a couple of cupholders in the console, a small cubby under the centre armrest, and shallow door pockets with an elastic strip to keep things in place. A nifty double glovebox rounds things out by allowing organized storage of those items you want kept out of sight.

For the most part, all the controls are laid out in a logical manner and fall easily to hand. The only exception is the stopwatch mounted in the middle of the auxiliary gauge package, which requires a bit of a reach to activate. In a nod to the original Beetle, the instrument panel is dominated by a large round speedometer, with a smaller tachometer and fuel gauges inset on either side. Standard equipment includes air conditioning, cruise control, colour-selectable ambient lighting, keyless access with pushbutton start, an auto-dimming rearview mirror, heated seats, Bluetooth phone connectivity, alloy pedals, power windows, and plenty more.

My test car was equipped with Volkswagen’s $1,090 Technology package, which ups the enjoyment and convenience level with a powerful 400-watt, nine-speaker Fender audio system (including subwoofer) and a GPS navigation system. I’d prefer a slightly larger nav screen if possible, but Volkswagen’s system is at least easy and intuitive to use.

A couple of glitches I noticed inside the test car included a slight rattle in the standard-equipment sunroof, and an intermittent fault in the oil pressure gauge that caused it to occasionally (and briefly) fall off to zero for no apparent reason. I’m sure these minor issues would be easily sorted out under Volkswagen’s four-year, 80,000 km comprehensive warranty.

On the road, the Beetle GSR certainly does scoot, zipping from 0-100 km/h in about 6.5 seconds while emitting a growly bellow from its four-cylinder powerplant. While I’d order my own GSR with the manual transmission, the test car was equipped with Volkswagen’s impressive DSG automatic gearbox, which offers the hooked-up feel of a manual transmission together with lightning fast automatic shifts. Drive and Sport modes allow you to choose between laid-back, early shifts that keep the engine revs down for good fuel economy, or more energetic late upshifts and early downshifts that keep the revs up for best performance. As with previous DSG-equipped Volkswagens I’ve driven, I found myself wanting a third "Goldilocks" mode to compromise between the two, but like I said, I’d select the manual myself, so perhaps I’m just a bit of a control freak when it comes to gear selection.

Cornering in the GSR is competent in a smile-inducing sort of way, and the car is responsive without being skittish or punishing. Instead, it’s well behaved in the curves, with satisfyingly precise steering, a nice flat cornering attitude, and good levels of grip. The handling feels reasonably neutral at moderate speeds, but being a front-wheel drive setup it reverts to understeer if you really push it. Overall, think "Golf GTI" and you’ll be pretty much spot-on, because the GSR is fun to drive in exactly the same way as the GTI.

The Beetle GSR starts at $35,030 including the $1,395 destination fee, which is $3,360 more than the regular 2.0TSI Beetle (but only $1,960 more by the time you add a sunroof to the regular Beetle, which is included with the GSR). My test car added the DSG automatic for $1,400 and the Technology Package for $1,029, bringing its total price to $37,520 including destination. At that price, the Beetle GSR provides an entertaining alternative to Volkswagen’s own Golf GTI, while competing against hot hatches such as the Mini Cooper S and Ford Focus ST. Compared to those cars, the GSR stands out thanks to its attention-getting personality and relative exclusivity – like the original GSR, Volkswagen only intends to build 3,500 GSRs, so if you want to put one in your driveway you’ll need to act fast.