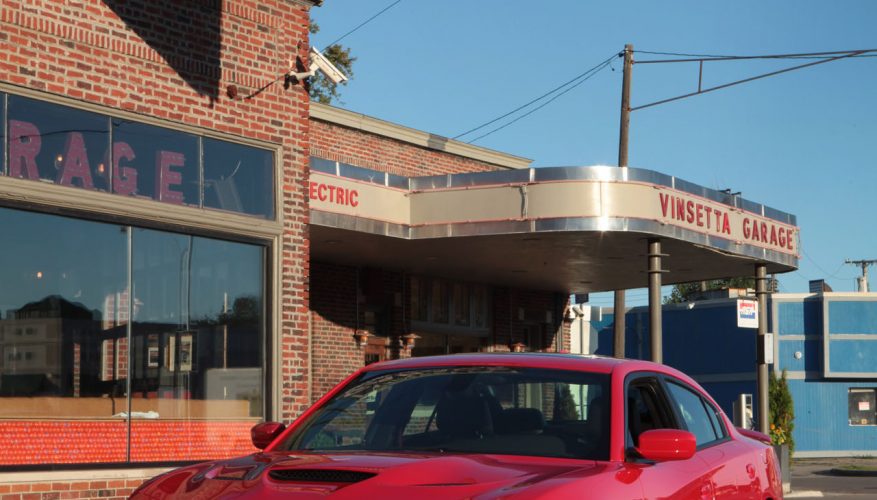 By: Trevor Hofmann
With the advent of the 707 horsepower 2015 Charger SRT Hellcat, Dodge is clearly saying: We are not the minivan company anymore!

We never got the hyper-powered Dodge Grand Caravan SRT family hauler that many hypothesized about, but yah, whatever. Now that Dodge is officially becoming Fiat Chrysler Automobile’s performance/muscle car brand, hellfire is clearly being stoked.

While the Charger SRT Hellcat closely follows the Challenger SRT Hellcat to market, it won’t lag behind its two-door sibling on the racetrack. Word has it the slightly smaller but approximately 45-kilo (100-lb) heavier four-door uses its 2,068-kg (4,560-lb) curb weight to hook up the rear wheels more effectively, passing the quarter mile 0.2 seconds sooner at 11.0 seconds flat when shod in its standard Pirelli P Zeros. Zero to 60 mph (96.6 km/h) takes just 3.7 seconds, while the world’s most powerful four-door will top out at a cool 328 km/h (204 mph). If you hadn’t guessed already, this makes it the quickest and fastest production sedan from any automaker, anywhere in the world. That’s it’s made right here in Brampton, Ontario, Canada is just icing on a very sweet cake for we Canadians.

This might be more than impressive for the Challenger SRT Hellcat, but a monstrous feat for the Charger SRT Hellcat. Why view them any differently? The Challenger is a two-door coupe that fights it out for engine output supremacy with numerous other pony cars and supercars, but as mentioned the Charger SRT Hellcat is now the most powerful four-door sedan in the world, overwhelming anything from Audi, BMW, Jaguar, Mercedes-Benz, or even Bentley and Rolls-Royce. It’ll take Bugatti building its oft-rumoured Galibier to take the throne away; either that or Mercedes won’t take kindly to its previous underling one-upping its V12-powered S65 AMG that “merely” puts out 621 horsepower, and pump up the volume all on its own.

Trumping Mercedes’ once more, the impudent American boasts an eight-speed automatic that can shift in 160-millisecond increments (depending on the gear) with rev-matching capability, compared to the uptight German’s seven-speed slushbox, but the SRT gang didn’t go so far to completely embarrass the AMG boys by adding the Viper’s six-speed manual as offered with the Challenger SRT Hellcat. Just the same the super-tweaked Charger will get an electronically tunable suspension with a driver-adjustable mode selector capable of controlling numerous vehicle performance settings.

The good folks working in the SRT division understand that such stratospheric engine output might be a bit much for regular errand running around town, so they’ve equipped the Hellcat with two keys, a black one offering up a mere 500 horsepower for picking the kids up from school, and an appropriately hell-raising red one to unleash all the demons from within.

Tamer still, the Hellcat features a Valet Mode that, by entering a four-digit pin code, will turn off launch control, lock the transmission out of first gear, and most importantly limit engine revs to 4,000 rpm.

While it’s one thing for a muscle car to pack gobs of power and torque, it’s another for it to manage curves like its European and Asian counterparts. Lest we not forget that the aforementioned three-pointed star Stuttgart-based firm was responsible for sharing its old E-Class platform architecture with Chrysler Group when its various LX models debuted in 2005, which included a fully independent suspension design capable of going head to head with many imports at the time. Auburn Hills has more than merely fine-tuned it since, the current LX quite the accomplished handler even in lower trims, let alone with SRT upgrades. The new Charger SRT Hellcat will incorporate 54:46 weight distribution front to rear, which certainly won’t push it into oversteer inherently.

A set of four “Slingshot” split seven-spoke 20 x 9.5-inch lightweight forged aluminum rims on the aforementioned Y-Plus rated 275/40ZR20 Pirelli P Zeros will do their best to keep the Hellcat on the straight and narrow path, while the largest set of brake rotors ever used on a Chrysler Group product, Brembo two-piece discs measuring 15.4 inches and clamped down on via six-piston calipers, should stop the car in short distances.

It won’t take short distances to notice that the new Hellcat is different from its more humble Charger siblings, mind you. Along with SUPERCHARGED badging and/or special character badges attached to the front fenders in similar fashion to classic Road Runner and Super Bee models (some photos show the former while others include the latter so we’ll have to wait for the final production model to surface to know for sure), the new Charger SRT Hellcat hardly leaves a body panel untouched in its Mephistophelean transformation. All the styling details are purposefully added, meaning nothing is merely for show.

Included in the upgrades are twin Viper-like heat extractors integrated into the aluminum hood, important for pulling hot air from the engine compartment and reducing turbulence, both flanking a power-domed centre section incorporating a dedicated cold-air intake system, otherwise known as a functional hood scoop, while a specially designed front fascia features downforce-inducing elements plus the aforementioned necessary ducting to keep the engine and brakes as cool as possible. Unique LED lighting elements have been added front and rear, while the car’s hind end had been upgraded too, with a new deck lid spoiler, a bumper that integrates a vertical vent at each end to release trapped air, and a diffuser that manages air from under the car. A pair of four-inch circular exhaust tips lets everyone know the Hellcat means business, if they hadn’t figured it out already. All of the Hellcat’s aero improvements, including the Charger’s inherently upright Kammback tail, give it a 12-percent aerodynamic advantage over the Challenger.

The standard 2015 Charger SRT Hellcat should be priced close to the $59,995 Challenger SRT Hellcat, which is a relative bargain so don’t expect them to be around for long. Your local dealer will likely be taking orders soon, ahead of the car arriving at Canadian retailers during the first quarter of 2015.
©(Copyright Canadian Auto Press)
Car Shopping Tools