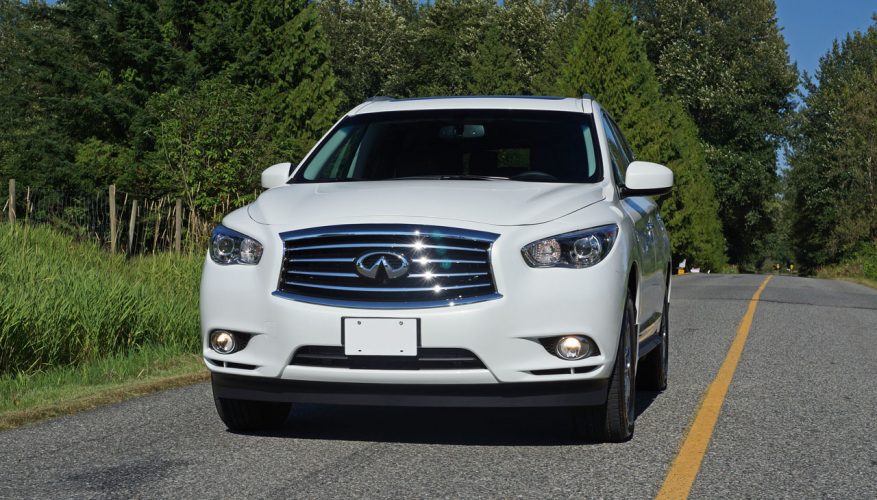 By: Trevor Hofmann
Every brand has at least one go-to model that pulls more buyers in than any other, and Infiniti is fortunate enough to have two. Its biggest seller is the Q50 sport sedan, a highly competitive four-door that deserves its journalistic praise and ownership loyalty, but very close in the Q50’s rearview mirror (with respect to sales numbers) is the big seven-passenger QX60 crossover SUV.

The QX60 isn’t the lowest priced crossover in Infiniti’s lineup, that honour belonging to the compact QX50, but it just might be the best executed CUV in the entire luxury segment, that when combined with its comparatively low price of entry and excellent fuel economy is too much of a good value proposition for many families to pass up.

In case I’ve got your curiosity piqued, the 2014 QX60 starts off at a very reasonable $43,000 plus $1,995 for freight and pre-delivery prep, and that model hardly shortchanges you on features. Rather, a sampling of the standard menu includes proximity sensing remote access with pushbutton ignition, a heated leather-wrapped steering wheel with multi-function controls, a powered tilt and telescopic steering column, leather upholstery, an eight-way powered driver’s seat and six-way powered passenger seat with heated cushions, tri-zone automatic temperature control, a large full-colour infotainment system with a rearview monitor, great sounding audio system with USB port and Bluetooth hands-free phone connectivity, a handy sunglass holder integrated within the overhead console (I always appreciate this feature), a powered tilt and slide glass sunroof, a powered rear liftgate, and THE most family-friendly third-row access in the industry, even making it possible to leave a child seat strapped into the second-row bucket (sans child, of course) while climbing into the rearmost seating area. That third row, incidentally, is large enough for real adults.

Infiniti makes its 3.5-litre V6 engine standard too, hooked up to a continuously variable transmission (CVT) with manual shift mode for those moments when you want complete control of the road ahead. Base models power the front wheels, but my tester was set up the way I’m guessing most Canadians will purchase their QX60, with all-wheel drive. That model ups the purchase price to $45,500, and for me would be a worthwhile investment just to be allowed up my local ski hill without having to install chains. I’m guessing the front-drive QX60 is decent in inclement weather thanks to standard traction and stability control, but the added confidence brought about by all-wheel drive is something most of us north of the 49th appreciate when winter makes its first chilling appearance.

The QX60’s 265 horsepower V6 is immediately noticeable when hitting the road, the engine fully capable of getting the CUV from standstill to highway speeds with ample quickness, especially if you turn the rotating drive mode selector knob on the lower console to the rightmost position in order to engage Sport mode before stomping on the throttle. The CVT is one of the best I’ve ever tested, so similar to regular torque-converted automatics that I’m going to guess you wouldn’t have even noticed it was different if I hadn’t told you. Manual mode could be useful for engine braking and might make a curving back road more engaging, but with this class of vehicle I’m just as happy leaving it in drive and going along for the ride. Cruising is where the QX60 comes into form, its effortlessly smooth ride yet well-damped fully independent suspension balancing comfort and stability perfectly.

The QX60, formerly named JX35, is the first vehicle in Infiniti’s lineup to prioritize comfort over performance since the old I35 that ceased production in 2004, if you can remember that far back. That model, a popular front-wheel drive competitor to Lexus’ ES series, was a model the brand should have never discontinued, but that’s a discussion for another time. What matters is that Infiniti has seen the light, realizing that it won’t hurt its brand image to have comfort-oriented vehicles beside those with a more purposefully sporting image. In fact, the aforementioned sales results are proof positive that it’s exactly what the customer wants.

Comfort in mind, Infiniti finishes off the QX60’s cabin with most of the care and attention it doles out to its pricier QX70 and QX80 models. I say most because it’s only shortcoming (and I reiterate “only” shortcoming) is a hard plastic dash top. It’s a strange anomaly in an interior that’s otherwise brimming with the brand’s usual high levels of quality materials and superb fit and finish. Any surface you’re likely to touch is made of soft and pliable plastic, or supple leather, real metal, a variation on a traditional Japanese layered parchment paper-style finish normally called washi but finished in a high-gloss lacquer and dubbed Kasane Washi by Infiniti, or genuine maple as an option. Yes, Infiniti uses authentic materials in comparison to other “premium” carmakers that substitute the real thing for faux imitation.

Along with real maple trim, the QX60’s options list is extremely long and varied including such items as two-way memory for the driver’s seat, steering wheel and outside mirrors, plus heated second-row seats, navigation with NavTraffic and the Zagat restaurant guide, either 13- or 15-speaker Bose audio upgrades, Bluetooth streaming audio, an Around View monitor with moving object detection and front and rear sonar, intelligent cruise control, distance control assist, intelligent brake assist, active trace control, blind spot warning and intervention, lane departure warning and prevention, forward collision warning, backup collision intervention, front seat pre-crash seatbelts, an Eco Pedal that will actually apply pressure upwards towards your right foot if you’re being too aggressive on the throttle (don’t worry, it can be turned off), and 20-inch split five-spoke alloy wheels wrapped with 235/55R20 all-season tires. Even fully loaded with everything Infiniti has to throw at it the QX60 won’t even break the $60k mark. By comparison, a number of domestic competitors work their way into the mid-$60k range without including anywhere near as many of the QX60’s options, let alone its impressive finishings or prestigious premium brand name.

The QX60 isn’t only about comfortable cruising in luxurious surroundings mind you, it’s also a bonafide workhorse. Along with its aforementioned people carrying attributes, it can load up to 447 litres of cargo behind the third row, 1,155 litres behind the second row, and 2,166 litres when the two rear rows are folded flat. If you need to tow a small boat or trailer the engine’s 248 lb-ft of torque comes in handy, combining with the crossover’s taut structure to deliver a 2,268-kilo (5,000-lb) tow rating.

While my tester was a base model other than the addition of all-wheel drive, I never once felt like I was driving anything but a fully equipped luxury crossover. That’s another thing I like about the way Infiniti does things: They don’t charge you extra for genuine premium materials, popular features or performance. All-round, the 2014 Infiniti QX60 is one of the best values in the seven-passenger luxury crossover segment, if not THE best value.
©(Copyright Canadian Auto Press)
Car Shopping Tools