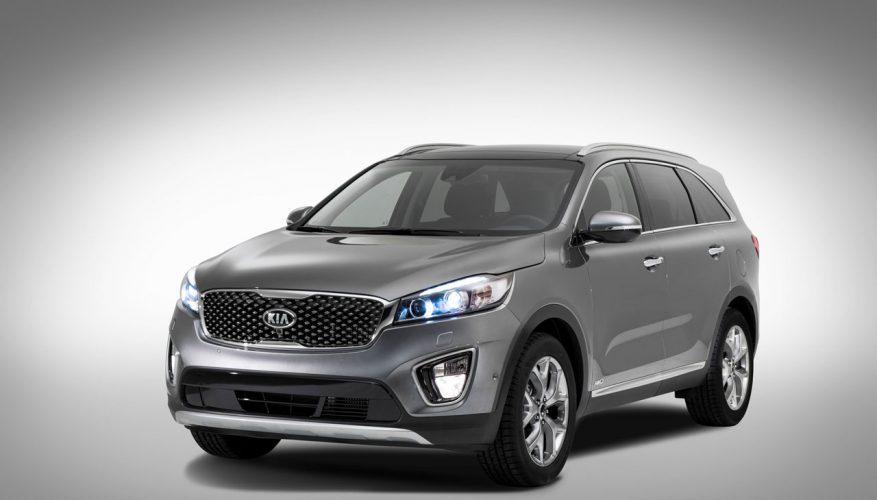 By: Trevor Hofmann
Deep into the Kia Sorento’s second generation (it’s been so long since its 2009 launch, in fact, that the model’s comprehensive 2012 mid-cycle upgrade has been considered its third-generation by some), the mid-size crossover SUV is scheduled for an update next year. The first sign of the 2016 Sorento in the metal will be a showcase in Korea later this month, after which it will debut at the Paris motor show on Thursday, October 2 as we reported earlier this month when the brand showed off some artistic renderings, but ahead of these events Kia has revealed the completely revamped model online.

As expected, the seven-seat family hauler gets Kia’s new more upright trademark “tiger-nose” grille, complete with its unique three-dimensional diamond pattern mesh insert, bookended by a set of wide sweptback headlamp clusters that butt up against the chromed grille surround in a similar fashion to BMW’s recently updated X5. A 15-millimetre lower roofline (1,685 mm) combines with 95 millimetres of added length (4,780 mm) for a sleeker look, while a higher beltline and what Kia calls “more muscular, rounded shoulders” at the CUV’s hind quarters adds visual drama.

Kia turned to its Namyang design studio in South Korea for the new Sorento’s exterior styling, although the brand says there were “significant levels of input” from both its Frankfurt, Germany and Irvine, California design studios. The result is an evolution of the today’s Sorento, although it’s heavily influenced by the Kia Cross GT concept that debuted at the 2013 Chicago Auto Show.

While Kia hasn’t said anything about powertrains, the Eco Dynamics badge on the new Sorento’s tailgate suggests that the automaker’s idle-stop system amongst other environmentally friendly features will be available. Additionally, as we reported earlier this month, expected powertrain options include a 2.4-litre direct-injection four-cylinder in base models and a 3.3-litre V6 in higher trims, while both engines will be mated to fuel-efficient eight-speed automatic transmissions. The 2.2-litre four-cylinder clean diesel engine offered in other global markets won’t likely make it to North America, although Kia would be wise to offer this fuel-miser here as the take-rate would undoubtedly be strong.

As for interior comfort and convenience items or any other details there’s little to go by, but Kia promises “a premium look and feel, with more space and numerous innovative features.” Previously, thanks to renderings of the upcoming interior, we were also able to report on a new wraparound dashboard fascia, new upright touchscreen infotainment system, as well as "high quality soft touch materials" used throughout.

The 2016 Sorento’s interior, which was designed in-house by the brand’s European division, was inspired by Swiss watches, stated Kia, with its gauges, switchgear, metal brightwork and stitched leather upholstery the resultant outcome of this horological approach. Larger vents adorn the revised instrument panel, while simplified centre stack controls point to greater sophistication within the digital interface above. Other changes include a shorter throw electronic gear selector positioned between two roll-top covered storage bins, one at the very least filled with cupholders, while a larger centre armrest appears to cover a more voluminous storage compartment beneath.

Speaking of volume, the 2016 Sorento’s greater interior space comes from 80 millimetres of added wheelbase (2,780 mm), the second and third rows as well as cargo capacity being most affected by the vehicle’s overall growth from end to end.

“While we have retained the name based on the tremendous success of the outgoing model, the all-new Sorento has been completely redesigned and re-engineered, and promises to surprise customers with its thoroughly updated styling, a host of new convenience and safety technologies, as well as enhanced space, driving comfort and handling response,” said Soon-Nam Lee, Vice President of Overseas Marketing, Kia Motors Corp.

With its upcoming third generation 2016 Sorento it appears Kia is on target for another highly successful mid-size crossover, but hopefully this one won’t need to continue on for so many years without a significant update.

Until the all-new redesigned Sorento debuts, the 2015 model, which was released early and is already on sale, continues forward with only minor changes.
©(Copyright Canadian Auto Press)
Car Shopping Tools