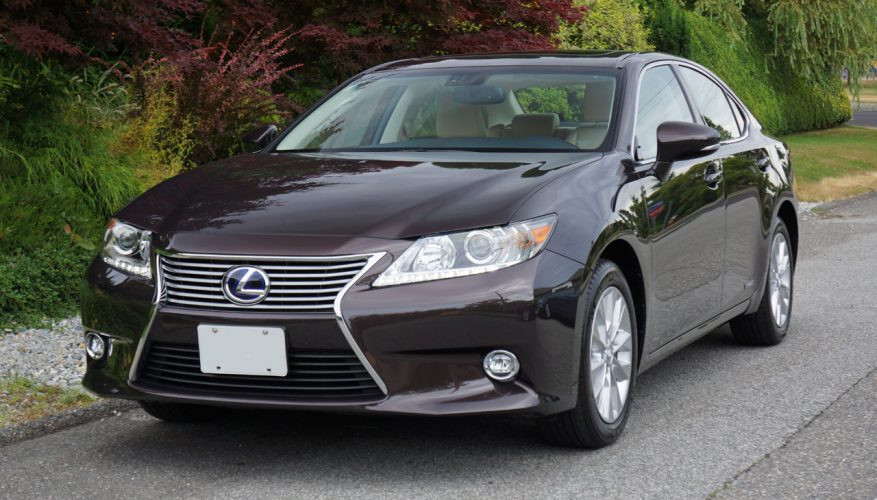 By: Trevor Hofmann
It’s hard to believe that 2014 is just the second model year for the hybrid version of Lexus’ most popular mid-size ES luxury sedan. If there ever was a no-brainer in the auto industry this car is it.

For the ES model’s first five generations ending in 2012, the Lexus ES shared underpinnings with the mainstream Toyota Camry, which has long offered a hybrid alternative. That Lexus didn’t choose to adapt the Camry Hybrid’s drivetrain for ES duty is something I have difficulty wrapping my mind around, as it would have been a prime candidate. It’s odd then that the brand waited until last year to offer a hybrid variant when the sixth-generation ES moved up to share the new Avalon’s platform architecture, but the ES 300h is a welcome addition just the same.

We don’t get the Avalon Hybrid here in Canada, our market too small to warrant such a niche trim level for a model that already sells in relatively small numbers overall. It’s a shame, as the Avalon is a superb entry-level luxury car and Toyota’s Hybrid Synergy Drive system would make it that much better, but it’s not the first time we’ve missed out on nice cars north of the 49th. Heck, we lived without the entire Scion brand throughout its formative years. Fortunately for us, the Lexus ES 300h has the ability to lull its occupants into a state of utter calm and relaxation at which point any concern over what we Canadians might be lacking evaporates like yesterday’s rain on a sunny day.

Lexus is known for luxuriant rides, and the ES 300h fits this ideal to a tee. The ES doesn’t ride, it glides. Just the same it won’t bounce over pavement irregularities or sway unwittingly through corners, its suspension taut enough to manage curves with surprising agility. Lexus completely reworked the car’s underpinnings for this new sixth-generation ES, with new opposite-wound front coil springs claimed to enhance straight-line stability. The new model’s longer wheelbase and specially tuned electric power steering make for good responsiveness to driver input, no doubt helped out by the standard 17-inch rims wrapped with 215/55R17 rubber.

By today’s standards, 200 horsepower and 212 lb-ft of torque don’t sound all that exciting for a large mid-size vehicle weighing in at 1,660 kilos, but twist the console-mounted drive mode select knob to the right into its Sport setting and the ES 300h fires off the line with a burst of front-wheel chirping enthusiasm that will likely take you by surprise. The charge up to highway speeds is just as relentless. Its surge of electrical thrust feels strongest in the initial stages of acceleration, after which the power from the internal combustion engine (ICE) seems to take over, the car never hesitating in its ramp up to highway speeds and equally as effective during highway passing maneuvers.

Of course, driving like this won’t help you to see anything close to Lexus’ claimed fuel economy rating of 4.7 L/100km city, 5.1 highway and 4.8 combined. That will require you to twist the rotating drive mode select knob to the left into Eco mode, and use a much more tender application of the right foot. That’s the way I drove most of the week, as eking out the best fuel economy possible by paying close attention to the various eco-minded driving displays is a new kind of fun that doesn’t only save you money at the pump, but can save you a lot in speeding fines too. To put the ES 300h’s fuel economy numbers into proper perspective, it’s a good idea to compare it to the exact same car using Lexus’ 3.5-litre V6; the ES 350 gets an estimated 9.9 city, 6.4 highway and 8.3 combined. Something else the ES 350 (and the majority of mid-size competitors) can’t claim is Super Ultra Low Emissions Vehicle (SULEV) status.

Cleanliness in mind, the ES 300h also has an EV mode that will let you whir along silently at low speeds for short distances. It’s most noticeable in parking garages where you’d otherwise here the sound of the engine and exhaust bouncing off concrete walls, the ES 300h strangely silent instead. Out on the road it plays less effect, as experienced in my city where the lowest minimum speed is normally set to 50 km/h unless slowing down for a school zone, but even 30 km/h is too fast for the car to continue running in electric-only power. I found EV mode switched off just below 20 km/h, where the ICE would join in for gasoline-electric combined propulsion until coming to a stop, at which point the engine shut down when it would otherwise be idling and using up fuel while emitting pollutants. When ready to go, the electric motor pushes the car off the line and the ICE blends back in at around 20 km/h again. It’s all seamlessly executed in the background without any fanfare.

Unlike the powertrain the ES 300h’s interior isn’t seamless, but rather there’s attractive off-white stitched leather and leatherette covering many of the surfaces. The dash top gets the white on black executive treatment, as does the leather-wrapped portion of the partially wooden steering wheel, plus the hand rest for the infotainment system’s computer mouse-like remote controller (one of my favourite Lexus features). The steering wheel’s genuine wood is perfectly matched to another shiny strip of faux woodgrain that runs across the dash front and doors, which also matches a thicker plank found on the lower console. It looks real and rich, especially when garnishing my ES 300h’s parchment coloured cabin. The armrests are nicely stitched together too, as are the optional leather-upholstered seats with perforated inserts, the latter necessary for new standard heated and ventilated front cushions. Lexus added these at no charge for 2014, along with SIRI Eyes-Free for controlling SIRI-equipped smartphones.

Of course, Lexus has packed the ES 300h full of standard safety equipment too, including ABS-enhanced four-wheel disc brakes with brake assist, electronic brake force distribution and Smart Stop Technology, plus traction and stability control, tire pressure monitoring, and 10 airbags, six of the usual array plus two for the driver and front passenger’s knees, and two side-impact bags for the rear. This full load of safety features along with the ES 300h’s inherently sound body structure helped it earn a Top Safety Pick award from the Insurance Institute for Highway Safety (IIHS).

My tester also came with one of three option packages. Those wanting a navigation system can opt for the aptly named Navigation Package, which not only adds the necessary interface to find your way to just about anywhere, but also a larger eight-inch infotainment display to make viewing easier, the heated wood-trimmed steering wheel I commented about earlier, plus an audio upgrade with an in-dash DVD player, and rain-sensing wipers.

I had the opportunity to test out the next option group dubbed Leather Package, which builds on the Navigation Package by replacing the standard perforated NuLuxe simulated leather upholstery with those perforated genuine leather seat surfaces I spoke of earlier, plus it adds an illuminated entry system, a power rear window sunshade and manual rear door sunshades, as well as my favourite option, the fabulous sounding 15-speaker Mark Levinson audio system.

Its difficult to complain about a luxury sedan as well executed and universally praised as the ES 300h, but part of my job is to critique and therefore I need to point out the car’s shortcomings. As you might have guessed, the ES 300h’s trunk is somewhat smaller than the ES 350’s at 342 litres compared to 430, and there’s no way to lower the rear seatbacks for longer items like skis, and no smaller pass-through either, but that’s not my chief beef. As expected, both ES 350 and ES 300h models get a soft touch dash top, soft touch door uppers, door inserts and armrests. This is not only par for the course amongst premium branded luxury sedans, but it’s starting to become the norm for mainstream mid-size four-door models too. I don’t mind when luxury brands use harder plastics on some lower dash panels and lower door panels in entry-level models, but it’s not ok in today’s market to cover the upper centre stack surround, lower console surfaces, and glove box lid in the cheaper hard stuff. In this respect Lexus needs to pay attention to Hyundai and it’s similarly priced Genesis, amongst other cars sold by mainstream brands that do a better job delivering the full luxury experience.

Considering the fuel savings and extra standard equipment allotted to the ES 300h over its conventionally powered sibling, a little over $4k isn’t too much to pay for the hybrid upgrade. Even with its few faults it’s a beautifully styled, well-mannered, impressively featured executive sedan that deserves its many accolades and loyal customer base.
©(Copyright Canadian Auto Press)
Car Shopping Tools