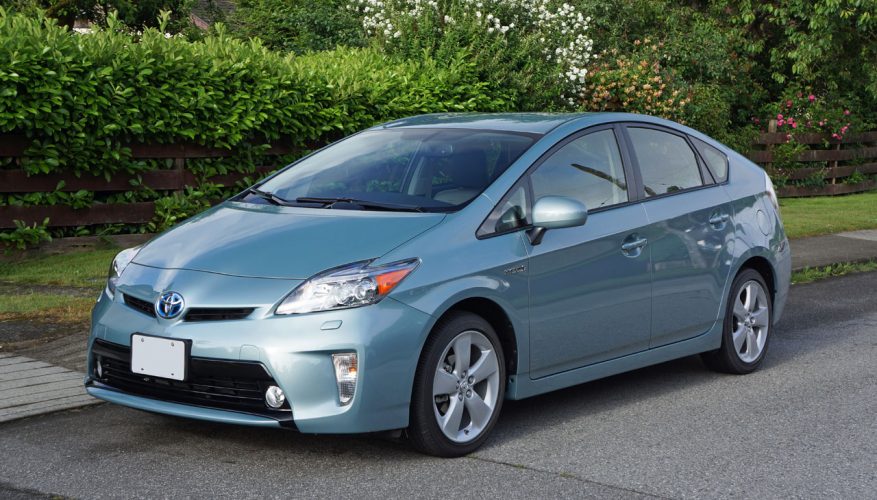 By: Trevor Hofmann
Every year Toyota gives us a Prius to test, and every year I reach the same conclusion: the Prius is a great car.

Even the first-generation Prius was a good car, not just a good hybrid. Back in 2000, the four-door five-seat compact model’s only HEV competitor was the even more compact first-gen two-seat Honda Insight, which wasn’t even partially practical, couldn’t go any faster than 60 km/h up a long hill after running out of electric juice (something I learned firsthand), and looked downright weird and wacky like some sort of Tokyo Drift-tuned Citroen DS21 (although nowhere near as cool as the pneumatically-suspended Parisian). It was thrifty on fuel but wasn’t a good all-round car, and poor sales were the result. Ever since Honda has been playing hybrid catch-up, while the best-selling Prius has never looked back.

As you’ve probably heard, Prius continues to outsell every other type of hybrid combined, the model having now passed the three-millionth sold mark worldwide. It’s grown into a mid-size car since that initial example, offering some of the best rear legroom and most accommodating cargo hold in the class, hybrid or otherwise. That, in a nutshell, is why it’s so popular. Certainly we all love to save on fuel and who can argue against emitting fewer pollutants? But most of us won’t forgo practicality in order to meet these objectives, which is why many impressive hybrids and full electrics go unsold and the Prius keeps chugging along.

That last point is another reason why Prius continues to sell so well, it just keeps chugging along. Maybe chugging isn’t such a good word to use for a car that can be eerily silent while driving at low speeds on pure electric power, but you get the point. The world’s favourite hybrid is relentlessly reliable. There are Prius taxis that have logged more than a million miles, let alone kilometres, and while they’ve undergone engine rebuilds and other mechanical work, the cars themselves have held up brilliantly.

Toyota has enjoyed so much success with the Prius that it recently spun off an entire line of sub-branded Prius models, starting with the subcompact Prius C and topped off with the mini-minivan-sized Prius V, while a new plug-in version of the regular Prius offers greater full-EV speed and range. While I’ve driven and covered each of these models before, I’ve spent more time in the regular Prius over the years, so getting behind the wheel of this 2014 Prius in mid-grade Touring trim was like reuniting with an old friend.

Toyota now offers the Prius in four trim levels, starting with the base car and then building on that with either the Moonroof Upgrade Package, the as-tested Touring Package, or the Technology Package. Unlike some trim package protocols, where each subsequent package adds features to the preceding package, the Prius upgrades are a little more random. For instance, my Touring packaged tester came with a nice set of 17-inch aluminum wheels on 215/45 tires, but an upgrade to the top-line Technology Package deletes these racy rims for the stock set of 15-inch alloys. Yet moving up through the Prius line doesn’t always buck the status quo. The Moonroof Upgrade Package, for instance, adds a powered tilt and slide moonroof as you might expect, with the unexpected addition of trés cool integrated solar panels, while a whole bunch of tech goodies are thrown in too, such as navigation with voice recognition, an enhanced audio system with SMS to speech and email to speech functions, satellite radio, an integrated garage door opener, and a touch sensitive lock/unlock “button” on the front passenger door handle. It adds $3,245 to the base Prius’ $26,105 list price, for a new total of $29,350, plus freight and dealer prep.

The Touring Package I spoke of a moment ago brings the Prius’ total price up to $31,090 while including all of the Moonroof Upgrade Package’s features except for the moonroof, and then adding on auto-leveling LED headlamps with washers, fog lamps, and new for 2014, Toyota’s faux leather upholstery along with an eight-way powered driver’s seat and heated front cushions.

As mentioned, the Technology Package, which pushes the Prius’ price up to $34,190, adds loads of tech upgrades such as dynamic radar cruise control, AVN premium navigation, eight-speaker JBL audio, and Toyota’s pre-collision system, plus most of the features from the Moonroof Upgrade Package including the moonroof, as well as some of Touring Package features like the heated synthetic leather seats, while adding a simulated leather-wrapped steering wheel and a rear bumper protector.

If you can do without the pleather and additional upgrades in these various packages, the base Prius is a mighty fine car all on its own, while its price, compared to other mid-size models that don’t even offer the benefit of hybrid propulsion, makes it quite the bargain. The base Prius feature set won’t leave you feeling like you’re slumming it either, with standard proximity sensing remote access with the touch-sensitive door handle on the driver’s side plus pushbutton ignition inside, as well as power windows with auto up/down all-round, power adjustable heated side mirrors, a tilt and telescopic steering column, Bluetooth hands-free with streaming audio, a 6.1-inch display audio system with six speakers, automatic climate control, an ECO Drive monitor, touch tracer steering wheel-mounted controls for the HVAC and audio systems, the aforementioned 15-inch alloy wheels, and more.

Safety plays a big part in every Toyota vehicle, with the brand’s Star Safety System coming standard on all the models sold in Canada. These features include ABS-enhanced brakes with brake assist and electronic brake force distribution, traction and stability control, plus Toyota’s Smart Stop Technology (SST), which cuts power to the engine when the brake is pressed. The Prius also boasts seven airbags including one for the driver’s knees, plus active front headrests with whiplash protection, front seatbelt pre-tensioners and force limiters, direct tire pressure monitoring, and the list goes on.

At the end of the day, however, the most impressive set of features in any Prius is its Hybrid Synergy Drive system, the most proven HEV drivetrain on the market. Toyota has upgraded and fine-tuned its hybrid setup over the years, the result being the current model’s combination of a DOHC, 16-valve, Atkinson-cycle 1.8-litre four-cylinder internal combustion engine (ICE) featuring variable valve timing with intelligence (VVT-i), with a high-torque electric motor and high-capacity nickel-metal hydride storage battery, for total output of 134 net system horsepower. As always, the system transitions between full-electric power and combined gasoline/electric propulsion as seamlessly as its continuously variable transmission “shifts” gears, EV mode good until about 18 km/h at which point the ICE joins in for higher speeds. There are other hybrids that allow higher-speed EV operation for longer durations, but Prius’ claimed fuel economy rating speaks for itself at 3.7 L/100km in the city, 4.0 on the highway and 3.8 combined. If you want more power to cross a busy intersection or pass a slower moving vehicle, simply press the “Power” button on the centre console, but in order to achieve anywhere near the aforementioned fuel economy you’ll need to leave it in Eco mode most of the time.

While 134 horsepower doesn’t sound like a lot in today’s hyper-powerful new car market, try to remember back a couple of decades (if you’re old enough) to a time when that number would have put a smile on any performance car enthusiast’s face. Suffice to say the Prius gets up and goes well enough, and with more verve than the numbers suggest thanks to the electric motor’s substantive torque arriving immediately upon pressing the accelerator, while the CVT wastes no time at all shifting gears. It’s smooth linear power all the way from zero to highway speeds, with the car’s terminal velocity fully capable of getting you in trouble with the powers that be.

The Prius handles well too, especially with the Touring Package’s 17-inch wheels and tires. They give the car a bit of extra bite and don’t detract from its smooth ride, a nice combination that blends the Prius’ comfortable demeanor with a touch of go-fast attitude.

I mentioned the Prius’ commodious interior previously, an attribute that should seal the deal if you haven’t already decided to buy into Toyota’s hybrid mantra. Pragmatic to the nth degree, the Prius provides 612 litres of cargo capacity behind the 60/40-split folding rear seatbacks and 1,121 litres when they’re both laid flat, while rear passengers are allowed the luxury to stretch out with near limousine-like legroom, a drop-down centre armrest with twin cupholders making life yet more comfortable.

Toyota doesn’t satiate a lot of the usual luxury longings like soft-touch interior surfaces or woodgrain accents, however, preferring to go the lightweight and recyclable route whenever possible. The end result is a cabin that is as green as currently available as well as good looking, with nicely textured plastics, many featuring classy metallic finishings, the pièce de résistance being a translucent electric blue garnished gearshift knob embellished with a cool circuit board-like tech pattern that I wish was used for additional switchgear too. Convenient cubbies abound as do charge ports for your personal devices, helping to make the 2014 Toyota Prius an extremely livable do-all companion.

If you haven’t dipped your foot into the hybrid lifestyle yet, the Prius is the ideal place to start. It’s plain and simply a great car.
©(Copyright Canadian Auto Press)
Car Shopping Tools