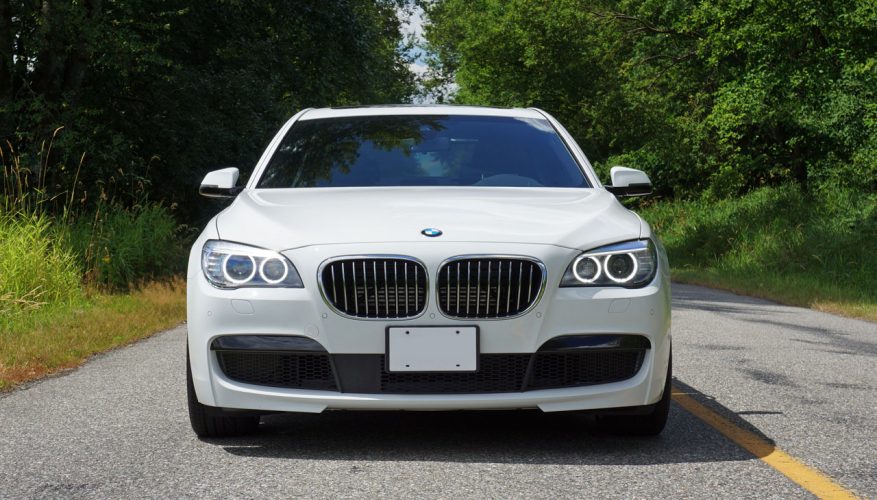 By: Trevor Hofmann
When I was young there were only three big luxury cars that caught my interest. OK, I just lied. During the annual auto show, always at my father’s side, we ogled Bentley Ts, Rolls-Royce Silver Shadows, Maserati Quattroportes, and even Aston Martin Lagondas let alone Bitter SCs and other oddball offerings, but Cadillacs and Lincolns couldn’t even turn our heads. No, we admired Jaguar styling, gave respect to Mercedes-Benz engineering, and longed to own a BMW 7 Series.

It seems that some things don’t change a heck of a lot. Certainly Bentley and Rolls-Royce rule the upper echelons of the luxury four-door segment, but most don’t have the $200,000-plus needed to partake. The rest of us scrubby unwashed proles need to “settle” for cars farther down the six-figure range, near where my 2014 BMW 750i registers in at $105,500, plus $2,095 for freight and pre-delivery prep. It’s not the base model, the six-cylinder-powered long-wheelbase 740Li starting at just $99,800 plus freight, but those desiring more performance in their daily commute will want to increase engine output from the 740’s merely adequate 315 horsepower to the 750’s thoroughly entertaining 443, and torque from an ample 332 to a soul-stimulating 480, while enjoying the handling benefits of this lone regular-wheelbase 7 Series model.

As you may well know, there are many intenders in this luxury flagship class, some pulling off impressive feats of styling while others wow with interior design and detailing plus features galore. Rest assured that the latest 7 does all that and more, the more being performance that’s in keeping with blue and white roundel legend. Performance tends to start audibly, the 750i’s twin-turbocharged V8 emitting a subtle growl as revs rise. Power comes on smoothly as one might expect in a car of this class, although a sudden dip into the throttle results in blisteringly quick acceleration that belies the big sedan’s 2,152-kilo curb weight. No matter how the right foot applies pressure, response is immediate yet the rest of the car is unperturbed. Calm, cool and collected, the eight-speed automatic’s gears change so quickly you’ll think there’s a dual clutch automated system connected to the shift lever, other than the transmission’s silky operation. Only subtle barks from the dual exhaust interrupt the seemingly seamless shift points, a reminder that the 750i is a BMW first and foremost, not an airport limo.

On that note I was dismayed there were no paddle shifters. Of course, paddles in such a large luxurious car might seem out of place, but it doesn’t drive like a full-size executive saloon and therefore deserves the full interactivity brought about by steering wheel-mounted shift controls. You can do so via the shift lever, of course, but the thick and meaty leather-clad M Sport steering wheel feels so wonderful in the hands that I didn’t want to let it go. At the speeds the 750i can manage through condensed, curling corners I didn’t want to interrupt my concentration either. Again, something amassing so much weight shouldn’t be able to do what the 7 can when straight turns to curve, but the 750i’s optional 245/40R20 Goodyear Excellence rubber on my M Sport-equipped tester bit deep down into the tarmac no matter how uneven, patched or undulating it was, somehow ironing out serpentine stretches of roadway into straightaways, making the most of the powertrain’s extensive reservoirs of power. The big 7 feels as confidence inspiring as a compact 3 Series, an accomplishment few of its competitors come anywhere close to.

As mentioned, most of the premium sector’s full-size luxury sedans are nicely finished inside, as is this BMW. Leather covered most surfaces in my test car including the dash top, dash facing, lower console surrounds, door uppers, door inserts, and seats, the latter which include perforated inserts to allow optional cold air ventilation. High gloss wood accents are finished to perfection, highlighted by beautifully detailed brushed metal trim. The 7’s cabin won’t leave you feeling shortchanged a single nickel, at least from a materials and build quality perspective.

While the 750i comes with a number of features that others charge more for, there are also a few items BMW dings extra for that are starting to show up as standard equipment with some rivals, such as a rearview camera and satellite radio, both found in the as-tested $5,950 Executive package that also includes soft close doors, the upper instrument panel upholstered in leather, and ventilated and active front seats, the latter helping to relax the pelvis and lower vertebrae during longer drives via alternating, cyclical up and down adjustments of the cushions. Powered side sunshades in back, a powered rear window sunshade and powered trunk lid are also included in the Executive package, while you’ll need to upgrade to this latter package if you want that rearview camera enhanced to a surround camera, which comes as part of the $4,500 Technology package that also includes Driving Assistant Plus, Night Vision with Pedestrian Detection, and Active Blind Spot Detection; the latter being one of those items that some competitors are including standard or at least on a package that doesn’t set you back $10,450. Lastly there’s a $3,500 Multi-media package that I can’t see a lot of people going for as it only adds a rear entertainment system and a six-disc CD/DVD changer, the latter not a popular item these days with the advent of smartphones. No, I’d spend the money exactly how this 7 was outfitted.

I’ve made mention of the M Sport package a number of times already in this review, as some of the features played a big role in the 750i’s enjoyment factor. No doubt the standard 245/45R19 tires do an admirable job of adhering to pavement, but the 20s mounted to the light-alloy double-spoke M wheels track better without doubt, and there can’t be any argument about the benefit of Dynamic Drive, which utilizes active stabilizers on the front and rear axles to counteract cornering roll, working together with the 750i’s standard xDrive all-wheel drive to maximize grip in all weather conditions. The $5,000 M Sport package also adds a deeper aerodynamically enhanced front bumper, side sills and rear bumper, plus window trim surrounds in high-gloss black, a similar gloss black added to some of the interior’s controls, such as the rotating iDrive knob’s bezel, front and rear ventilation buttons as well as the audio controls, although the addition is actual ceramic for a weighted feel to go along with a cool custom look. The roofliner gets the black treatment too, or rather dark anthracite, and let’s not forget the smaller radius, thicker rimmed M leather steering wheel I spoke of before.

While BMW offers an ultra-high-end Bang and Olufsen audio system for an extra $4,900, the stock Harmon/Kardon surround sound unit was superb. If you’re an audiophile and actually back up your music love affair by purchasing something like Sony’s new NWZ-ZX1 Walkman high-res music player, then by all means opt for the top-line B&O experience, but for most of us who source our music from the radio or smartphone, the latter which eliminates much of the sound quality from the original recordings, spending more for a luxe audio system can be a big waste of money.

Like the stock stereo, BMW has invested in reams of standard systems that truly make a difference to life with the car, such as standard proximity sensing remote access with pushbutton ignition, an electronic parking brake that automatically releases when the car is put in drive or reverse, and a superb iDrive infotainment system that has completely ironed out all of the bugs from its early days when BMW was THE frontrunner in information and entertainment technology and therefore suffered the bad press often associated with innovation. iDrive is now one of the best infotainment systems in the industry. Additionally, the 750i gets fabulously comfortable and supportive seats front and rear, heated front and rear cushions, a heated steering wheel, an auto-dimming rearview mirror, LED fog lights, a powered glass sunroof, front and rear park distance control, navigation with real-time traffic info, all the expected safety features and much more.

Along with the 750i’s superb performance dynamics that inherently make it one of the safest cars on the road as well one of the most enjoyable to drive, it remains a flagship sedan that truly deserves our respect, and not only for the car it is today but also for three decades of full-size four-door luxury leadership. It’s that kind of heritage that imitators can’t emulate, setting the 7 Series apart.
©(Copyright Canadian Auto Press)
Car Shopping Tools