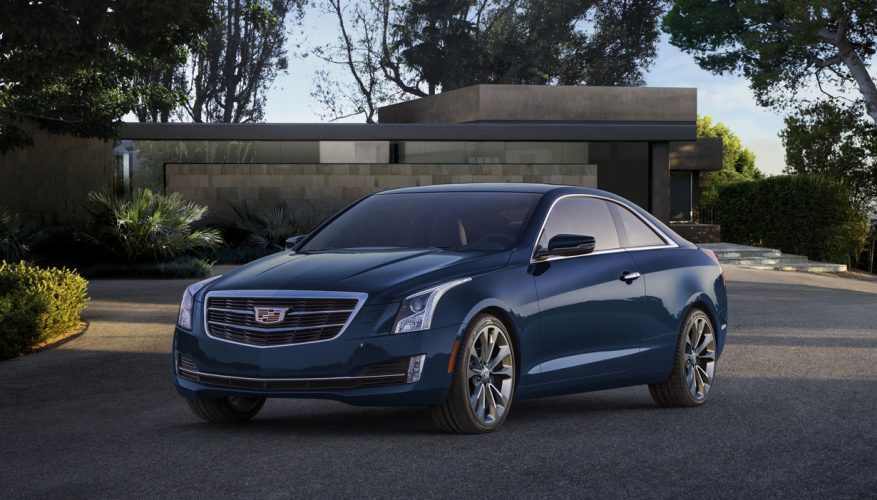 By: Brian Armstead
It’s rare that I absolutely gush over an automobile. After all, as an automotive journalist I drive about 80 new vehicles every year. And yes, we’re talking Porsches, BMWs, Benzes, Bentleys and Bugattis. So when the press folks at Cadillac offered up the all new 2015 ATS Coupe, my interest was piqued because I like the direction Caddy is moving in, but I was not ready for the superb effort that is the ATS Coupe.

The ATS is the baby of the Caddy lineup, with Big Daddy Escalade at the top of the heap, and XTS, ELR, SRX and CTS in the middle. The ATS can be considered in many ways a baby CTS, which in itself is a compliment. So imagine my angst when Cadillac announced that the scorching hot CTS Coupe, with its performance “V” variants would be eliminated from the lineup, replaced initially by the smaller ATS Coupe, with performance models to follow at some point in the future.

I immediately thought “Caddy is punking out. They want a cheaper coupe, and will somehow sacrifice performance.” I thought back to other performance/luxury oriented cars that Cadillac and parent company General Motors produced, got them just right, and pulled the plug. GTO, XLR, Allante, Grand National and Firebird came to mind. But alas, this is no trickery by Caddy or the big General. I recently drove the all-new Chevy Corvette, which I dubbed “the best American car I’ve ever driven.” That still holds true, but the ATS Coupe is certainly a strong number two.

In Cadillac media releases, they refer to the new ATS Coupe as “Low, Long and Wide.”  It’s the perfect description. Recently at the swanky Graham Hotel in the Georgetown section of Washington, D.C., Cadillac assembled a mini-fleet of 10 ATS’ for journalists to road test. It’s when you are behind the wheel and see other examples of what you’re driving that you can either appreciate or denigrate the manufacturer’s efforts. To see the ATS Coupes pass by repeatedly showed off the seriously sexy lines of this two-door masterpiece. Though a couple of inches shorter than the CTS Coupe, it looks the same size because of the low-slung styling it incorporates. The Coupe’s aggressive stance features wider front/rear tracks and a lower roofline than the ATS sedan. At 1,531 millimetres front and 1,567 mm rear, the two-door has a 20-mm wider track. Overall vehicle height is 28 mm lower than the sedan. The lower roof contributes to a lower centre of gravity height, which also reduces roll and improves steering response.

The 2015 ATS Coupe is also 20 millimetres longer than the sedan, although it rides on an identical wheelbase. The extra overall length helps to further enhance the Coupe’s dynamic appearance, resulting in a sweptback look from front to rear. Dual exhausts exit the rear, enhancing its performance presence.

At rest stops where the buying public could weigh in on the new Coupe, men and women were equally enthusiastic, and impressed with the car inside and out. No guy wants a “chick car,” and few women want a car that’s so macho it’s a bear to drive. The ATS Coupe is about style and performance, executing both well.

Settle in the cockpit with body hugging seats, and grip the thick-rimmed steering wheel.  Peer out of the windshield and view information projected there by the optional Head Up Display. Look out over the hood with its subtle power dome, knowing underneath you’ll find either a 272-horsepower 2.0-litre four-cylinder turbocharged engine or the optional 321-horsepower 3.6-litre naturally aspirated V6. Both are a blast to drive. You can get rear-wheel drive or all-wheel drive with either engine. Shifting chores are handled by a six-speed manual transmission (only available with the turbo four), or a super crisp six-speed automatic with magnesium paddle shifters mounted to the steering wheel.

As you cruise down the road, know that the ATS Coupe’s 50/50 weight balance will enhance your driving pleasure. A driver-adjustable “FE3” sport suspension is available and includes Magnetic Ride Control, a mechanical limited-slip differential, high-capacity engine cooling system and 18-inch summer-performance tires. Magnetic Ride Control is a real-time damping system that delivers more precise body motion control. It “reads” the road and can change damping every millisecond.

When it’s time to stop, optional Brembo performance brakes haul you down from high speeds in a hurry. And if you don’t want to flex your performance muscles and just chill, the ATS Coupe is very compliant. Inside, the driver-focused cabin features handcrafted cut-and-sewn upholstered interior combinations, decorative stitching and, depending on trim level, leather, aluminum, carbon fibre and wood.

All of the latest safety and tech wizardry is incorporated, including 4G LTE connectivity that works through Caddy’s “CUE” telematics system, turning your ATS into a rolling wi-fi hotspot that connects up to seven devices.

Canadian pricing for the 2015 ATS Coupe will be announced later this summer when it goes on sale. This is a very impressive automobile. Well done Cadillac!
©(Copyright Canadian Auto Press)
Car Shopping Tools