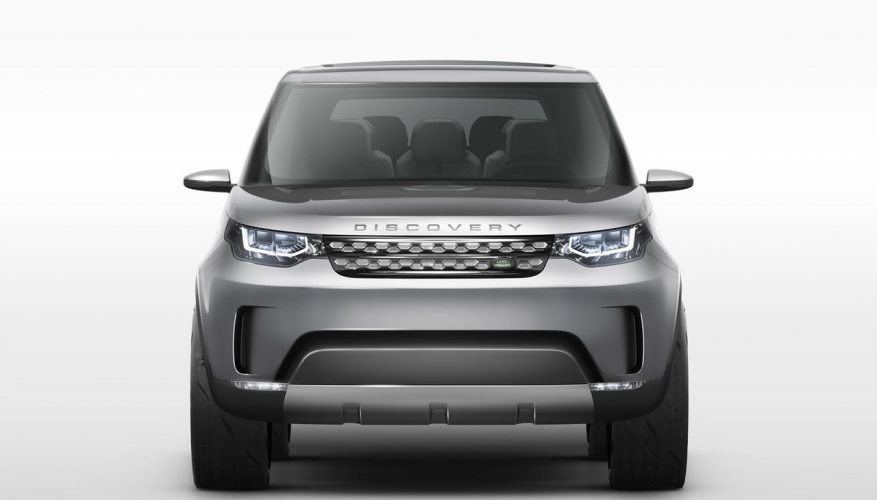 By: Trevor Hofmann
As you may have already heard, Land Rover will soon bring to market a seven-passenger crossover SUV to go up against luxury carmakers’ already experiencing strong sales of premium family haulers.

The upcoming Discovery Sport (North American models may receive a different name being that the Discovery is called LR4 here) will go up against seven-passenger CUVs currently sold into the mid-size premium crossover segment by such luxury nameplates as Acura, Audi, Buick, BMW, Infiniti, Lincoln, Mercedes-Benz, and Volvo, with yet more expected to join the fray from premium players such as Cadillac, Jaguar, and Lexus.

The photos suggest the new Discovery Sport is taking on styling details of the Discovery Vision Concept introduced at the New York International Auto Show earlier this year, although more conventional mirrors and door handles have been added. The result is a vehicle that should look like it’s part of the Land Rover family, a critically important move, although on the negative the new crossover SUV could look a great deal like the current Ford Explorer, which to Land Rover’s credit was heavily influenced by the upscale British brand.

Ford might argue that it paid for Land Rover’s new look while under the American automaker’s Premium Auto Group (PAG) umbrella, and that FoMoCo never turned a profit on the brand so it’s merely trying to recoup its losses by pulling some of those design cues into its blue-oval badged products. The styling exercise has worked well with the Dearborn-based brand’s car division too, its Fusion sedan looking like a near carbon copy of the exotic Aston Martin Rapide four-door coupe, another brand previously under PAG control.

While there’s little Land Rover can do to cause Ford to change its current design trajectory, its choice to bring a seven-passenger crossover SUV to market shows that it’s not about to try and change the mindset of premium buyers looking for new family haulers. Yes, Land Rover is finally figuring out what Ford, and more directly in the premium sector, what automakers such as BMW have known all along, the majority of luxury buyers want their SUVs to look rugged yet drive like cars.

Way back in 1994 Land Rover made the coup of the century by acquiring a slew of classic British marques, making then company boss Bernd Pischetsrieder Automobile Industry’s “Man of the Year” in 1995. The company was Rover Group, struggling in a quagmire of debt, but the brands Rover and commensurately BMW held were iconic in the global auto industry. While they included MG and the Rover nameplate itself, amongst others such as Riley, most important to BMW would prove to be Mini, which made up more than 15.5-percent of total BMW Group sales last year. Nevertheless, at the time it appeared that Land Rover was the real coup d’etat.

After all, luxury SUV sales were already starting to heat up around the world and especially here in North America, but BMW had nothing in its arsenal to do battle with Mercedes-Benz and the likes. Land Rover seemed like the perfect addition, and one that didn’t tarnish the Bavarian company’s performance car image the way most felt would occur if an SUV were added to the blue and white roundel ranks. How wrong we were.

After its first full year of sales in 2000, the sole BMW X5 model easily outsold the entire Land Rover lineup. Not coincidentally, 2000 was also the year that the German automaker saw the future of SUVs as clear as day and sold Land Rover to Ford. Was it a good decision? While the British 4×4 brand is riding high now, relatively speaking, Ford never made a profit on Land Rover throughout its ownership. To make the point clearer, in 2012 Land Rover’s entire global sales weren’t even as strong as that first year of the BMW X5, with 27,496 units delivered in 2012 compared to 38,282 X5s sold in 2000. Land Rover only managed to bypass this mark in 2013 with a total of 45,077 sales, the big jump due to the introduction of its first serious contender in the entry-level luxury crossover SUV segment, the Evoque.

Will the new Discovery Sport do in the mid-size family segment what the Evoque has done for Land Rover in the compact entry-level premium crossover class? That’s hard to say, but the trickle down effect of the full-size Range Rover and new Range Rover Sport models, as well as the legendary Land Rover name will certainly bolster its odds.

Prototype examples of the new Discovery Sport have already shipped for in-depth testing purposes, while the production version will go on sale in 2015.
©(Copyright Canadian Auto Press)
Car Shopping Tools