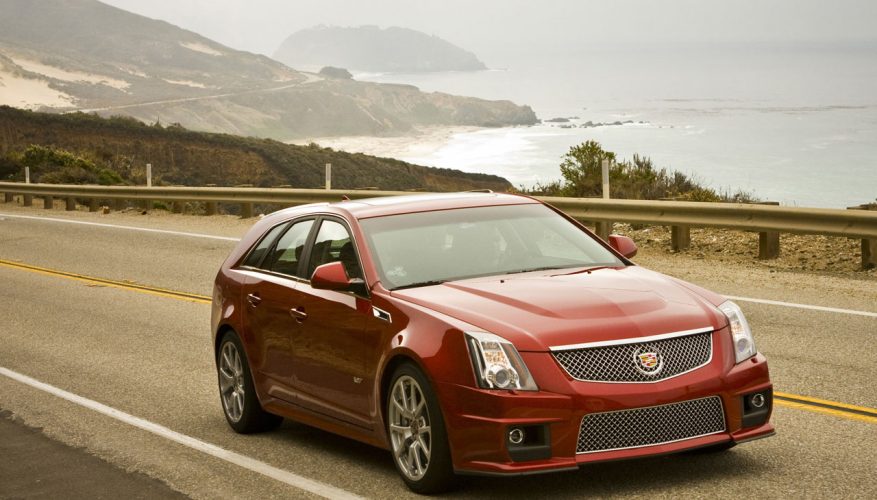 By: Lyndon Conrad Bell
Something about driving a Cadillac CTS-V Sport Wagon makes you swagger when you step out of it. After parking the super Caddy, you’ll find yourself walking into places with an authoritative air, as if you own the world. It has been said power corrupts, and while we wouldn’t characterize the feeling as corrupted per se, the phrase "infused with attitude" does resonate quite vigorously in this circumstance.

Like so many high performance cars, the Cadillac can get you from Adele to Beyonce with insane quickness. However, unlike numerous other high performance cars, the CTS-V Sport Wagon accomplishes this with a sophistication completely belying its amazing potential. While the angular, sharply drawn lines of this unorthodox five-door would lead you to imagine a harsh ride and an all-enveloping exhaust note, the CTS-V Sport Wagon instead displays polish, sophistication, and refinement. And, as if all of this isn’t good enough, when you factor in the utility, you have a high performance car that literally hauls!

Among the model’s most distinctive mechanical features are GM’s Magnetic Ride Control suspension system, a set of exceptionally robust Brembo brakes, and four super-sticky Michelin Pilot Sport PS2 high performance tires mounted on 19-inch forged aluminum wheels. The heart of the CTS-V Wagon though is the resident supercharged 6.2-litre V8. Capable of providing immense thrust, the extremely powerful engine delivers its 556 horsepower and 551 ft-lbs of torque to the rear wheels via a limited-slip differential.

And, IT’S A STATION WAGON!!

The highest performing American station wagon ever built for the street is offered with a choice of two six-speed transmissions. For those who love to row to inform their go, there is a six-speed manual with a dual-disc clutch. For others who prefer to mostly set it and forget it, a six-speed automatic with steering wheel-mounted shift controls is the option. While the automatic’s steering wheel-mounted controls require no shift lever movement to allow immediate tap up/tap down gear selection, moving the shift lever into the manual gate will activate a performance-oriented mode to facilitate a more aggressive shift program for sustained high-performance driving.

The 2014 Cadillac CTS-V Sport Wagon gets a high-performance rear axle with a cast iron housing specified to enable faster warm-up and cooling. The red hot Caddy’s rear end also features asymmetrical half-shafts to smoothly manage the incredible torque output of the supercharged engine. As you might imagine, the CTS-V’s governing fuel economy philosophy is more about “smiles per gallon” than miles per gallon. Transport Canada claims a rather optimistic 17.8 L/100km in the city and 11.0 on the highway with the automatic transmission, while the manual gets an estimated 15.0 city and 10.6 highway rating.

Nail the throttle and the supercharged V8 makes its presence readily audible. However, rather than blasting a skin shredding shriek, the engine emits a warmly muted, yet undeniably powerful baritone-accompanied by skin shredding acceleration. The Corvette-sourced engine sends the Cadillac CTS-V Sport Wagon screaming to 100 km/h from rest in just over four seconds. Wind it to redline in second gear and you’ll be doing 130 kilometres per hour- as well as wearing a HUGE grin on your face. Keep your foot to the floor, the Cadillac will eventually top out at 318 km/h (that’s 198 mph).

Cadillac’s engineers reworked the braking system for the 2013 model year to incorporate two-piece front brake rotors as standard equipment. Designed to offer greater resistance to warping and potentially longer rotor life, this new strategy also reduced the weight of the suspension system. As a consequence, both braking and handling were improved considerably.

Speaking of the suspension system, as we mentioned before, pavement irregularities are absorbed with a degree of competence wholly in keeping with Cadillac’s rep for old school smooth. Yet, when the CTS-V Sport Wagon is asked to turn in sharply, the magnetic suspension system keeps the body flat while the Michelin Pilot Sport PS2 tires bite into the pavement relentlessly. Having exhibited outstanding balance, grip and agility, the V-Wagon then heads swiftly off in the new direction you’ve chosen with no extraneous steering inputs or hesitation. You will be absolutely amazed at the way this car goes.

For many years, anyone desiring a truly capable wagon of this caliber was pretty much locked into one of the Germans. With the 2014 Cadillac CTS-V Sport Wagon, which starts at $75,655 plus $1,800 for freight and pre-delivery preparation, Canadians desiring supercar performance with the practicality of a station wagon can confidently shop “domestic” and feel good about helping out our largest trading partner and friend to the south. It’s one of the finest performance cars available today.

Drive a Cadillac CTS-V Sport Wagon, you will indeed feel infused with attitude, and justifiably so. Oh yeah, and did we mention-IT’S A STATION WAGON!?!?
©(Copyright Canadian Auto Press)
Car Shopping Tools