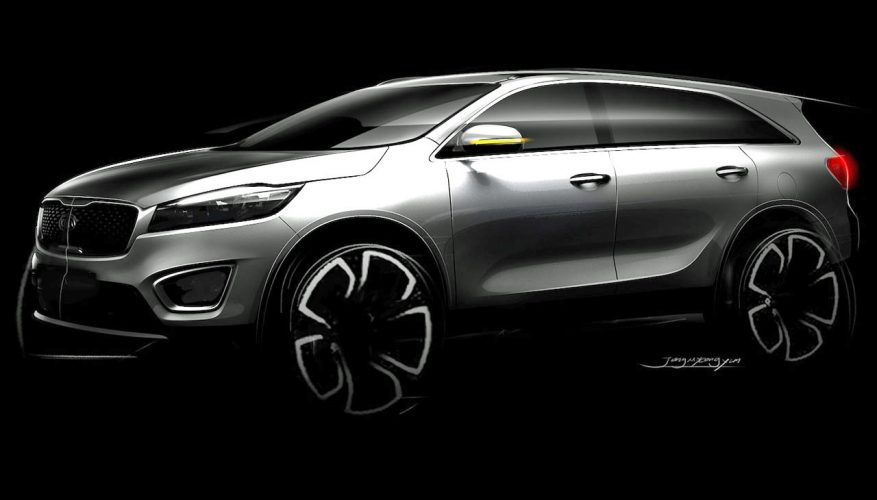 By: Trevor Hofmann
We love a good tease, and it appears that Kia is up to its old tricks with the release of two slick looking renderings of the upcoming 2015 Sorento crossover SUV.

Like what you see? The completely updated mid-size model doesn’t only appear to be getting longer, according to Kia it will grow in overall length and wheelbase for more second- and third-row space, allowing it to compete more effectively against seven-passenger rivals such as Toyota’s Highlander and Nissan’s Pathfinder.

Like the Highlander, the updated Sorento will get a lower roofline that will combine with a higher beltline and the SUV’s longer profile for a sleeker, sportier look plus a “more muscular stance,” says Kia, while more curvaceous bodywork featuring “rounded shoulders at the rear and deeply sculpted body surfaces” joins a “larger, more upright” version of Kia’s new trademark “tiger-nose” grille for much more identifiable branding. Other details include uniquely shaped headlight clusters that butt up against the chromed grille surround a la BMW X5, and new wraparound trapezoidal taillights integrating LEDs in a signature pattern.

Kia says the new third-generation 2015 Sorento’s interior “will raise the bar for luxury in its segment,” a bold claim considering how far upmarket Toyota has already taken its 2014 Highlander, as have other brands within the segment including the mid-size crossover SUV offered by Kia’s parent company’s namesake brand, the Hyundai Santa Fe. Just the same, Kia has repeatedly impressed the automotive press with its new models, so we’ll have to wait and see how close the Sorento gets to premium levels of interior refinement.

Until then, the South Korean brand promises a new wraparound dashboard fascia, new upright touchscreen infotainment, as well as “high quality soft touch materials.” The interior, which was designed in-house by the brand’s European division, was inspired by Swiss watches, says Kia, with the crossover SUV’s gauges, switchgear, metal brightwork and stitched leather upholstery the resultant outcome of this horological approach. Larger vents adorn the revised instrument panel, while simplified centre stack controls point to more sophistication within the digital interface above. Other changes include a shorter throw electronic gear selector positioned between two roll-top covered storage bins, at least one likely filled with cupholders, while a larger centre armrest appears to cover a more voluminous storage compartment beneath.

Expected powertrain options include a 2.4-litre direct-injection four-cylinder in base models, plus a 3.3-litre V6 in higher trims. Both engines will come joined to fuel-efficient eight-speed automatic transmissions. The 2.2-litre four-cylinder clean diesel engine offered in other global markets won’t likely make it to North America, although Kia would be wise to offer this fuel-miser here as the take-rate would undoubtedly be strong.

While these teaser images are interesting, Kia won’t keep us guessing about the CUV’s other details until the model’s European debut at the 2014 Paris Motor Show on October 2nd, but rather will unveil the 2015 Sorento in its home market towards the end of August. Stay tuned for a follow-up story next month.
©(Copyright Canadian Auto Press)
Car Shopping Tools