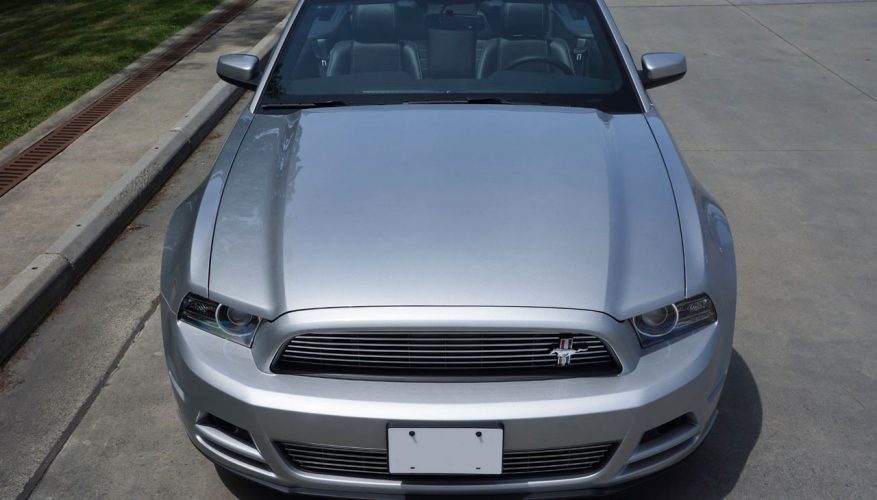 By: Trevor Hofmann
Every time Ford gives its Mustang a thorough makeover I get a little nervous. Certainly I enjoyed a very calm quarter century while the Fox-bodied model creaked and groaned over speed bumps and other pavement imperfections, but since the blue-oval team redesigned its iconic pony car for the 2005 model year and subsequently in 2009 for model year 2010, I’ve had more than one restless night pondering what they might do next.

We now know that model year 2015 ushers in an entirely new modern-day Mustang with unprecedented styling that I’m still not quite accustomed to, which makes me all the more appreciative of the current model. Like the 2005 and 2010 redos, the 2014 Mustang pulls inspiration from the late ’60s, early ’70s era, just before muscle cars got neutered by stringent (for the times) emissions regulations and the resultant power robbing catalytic converter. Of course, today’s 662-horsepower Shelby GT500 makes an original ’69 GT500 KR “King Cobra” I once drove seem almost tame (other than the old beast’s reluctance to maintain a straight line at full throttle), but that’s another story for another time, as the subject of this review is a much more attainable 2014 Mustang V6 Convertible.

Just because the Mustang V6 Convertible is powered by the base six doesn’t mean it’s boring however, as the car’s 3.7-litre, DOHC, 24-valve V6 makes a sizable 305-horsepower and equally motivating 280 lb-ft of torque that combines with a relatively lightweight 1,657-kilo (3,652-lb) body mass for a 5.5-second sprint to 96.6 km/h (60 mph) and 14 seconds for the standing quarter mile. A little retrospective glance backwards shows that even this base V6 puts out 15 more horsepower than the legendary 1968-71 Boss 302 V8, so let’s all pay respect where respect is due. Then again, you don’t have to ante up for the all-conquering Shelby in order to add more power to the Mustang mix. The 2014 GT’s DOHC, 32-valve 5.0-litre Coyote V8 makes a soul-stirring 420-horsepower and equally giggle-inducing 390 lb-ft of torque, while both engines come in either six-speed manual or six-speed automatic guise.

My tester included the autobox, a $1,400 option that suits this comfortable cruiser well. Don’t get me wrong, as this drop-top can duke it out in the corners as well as most of its fully independent suspended peers, but I found myself lazily cruising about town more often than lighting up the rear tires. A relaxed driving position on thoroughly pampering seats with merely adequate side support prompted such nonchalant speeds, that and the hot sun beaming down on the car’s black leather upholstered seats, their white stitching looking positively premium while Led Zepp’s D’Yer Mak’er (among other classic and alternative rock tunes) emanated from the upgraded AM/FM/single-CD six-speaker and twin-subwoofer-enhanced Shaker audio system, not to mention packed traffic on Main St., all conspiring to influence the laid back cruiser attitude.

Each and every V6-powered convertible model gets the “Premium” designation by the way, which means that 17-inch machined aluminum wheels with painted pockets and the choice of a wider range of option packages come standard, compared to the V6 Coupe that offers the Premium package as an upgrade. My tester came with the “Equipment Group 203A” package as well, a special Mustang Club of America add-on that’s well worth the $2,900 charge as it includes a gorgeous dark stainless steel billet grille with a tri-bar Pony badge positioned to the driver’s side, unique Mustang Club of America side stripes, a rear deck lid spoiler, and sweet set of sterling gray metallic painted 18-inch alloy rims wrapped in 235/50ZR18 Pirelli P Zero Nero rubber. The package adds a set of carpeted front floor mats embroidered with the Mustang Club of America logo too, although don’t look for them in the photo gallery as yours truly forgot to remove them from their plastic pre-delivery pouches hidden within the dark recesses of the trunk.

Along with the 203A package upgrade my V6 Premium Convertible came with the $300 cloth roof option and the available boot cover for $200, while additional options included the $700 Reverse Sensing System and Security Package with rear sonar that was quite handy when the top was up and rear visibility compromised, plus an active anti-theft system and wheel locking kit. Sync hands-free phone connectivity was also included, as was satellite radio, heated seats and heated mirrors with ultimately cool puddle lamps that project the Mustang pony logo onto the street or sidewalk below after clicking on the remote upon entry or alternatively, when exiting the car. These items, as well as the aforementioned leather upholstery, a $1,500 option, pushed the base V6 Premium Convertible’s $32,499 price tag up by $6,600 to an as-tested $39,099, plus $1,550 for freight and pre-delivery prep of course.

All of these V6 Convertible features are set into a nice looking cabin, albeit the electronics are nowhere near as advanced as with other Ford models. It’s the blue-oval brand’s leadership in offering beautiful full-colour multi-information displays as standard equipment and even more impressive MyFord Touch infotainment systems across its varied lineup that makes the current Mustang feel a tad outdated, something the next-gen 2015 Mustang will remedy, along with better quality soft-touch plastics on more surfaces throughout the interior. As it currently stands, upper and lower dash plastics are now soft to the touch, so all Ford should have done is add soft-touch upper door panels to pad the place where elbows often reside in order to give its interior more of a premium feel. The door armrests are soft-touch, mind you, as are the door inserts, but my bony elbows don’t hang so low and therefore they got the sore treatment brought about by those hard door uppers. This, and air vent handles that were a little fidgety are my only complaints in an interior that’s miles more appealing than any previous Mustang, at least from a comfort and convenience perspective.

As expected in a fairly large four-seat convertible there’s a little shake and shimmy over rough patches of pavement, but no rattle and hum. Generally the Mustang V6 Convertible’s body structure is tight, with zero twist even under the engine’s very generous full throttle. With the well-insulated roof raised the V6 sounds good at idle and just fine at lower revs, but its note doesn’t exactly get the blood boiling in the upper rev range, at least nowhere near as easily as the GT’s V8 or last year’s totally intoxicating Boss 302 (sadly off the menu for 2014). Then again, lower the top, a process that still requires two corner latches to unfasten and then a slight push up at the centre before dropping electrically, and the 3.7-litre mill actually sounds pretty mean, the V6 almost taking on a V8 burble at lower revs.

The six-speed automatic shifts smoothly and quickly enough for sporting behaviour, its performance helped along via a thumb-actuated rocker switch on the shift knob for manual mode when the lever itself is set to the “S” position for sport mode. Braking is good with a nice linear feel when scrubbing off speed, my tester’s larger 18-inch wheel and tire package no doubt helping in this respect.

From a practical standpoint the Mustang Convertible delivers excellent front seat spaciousness and adequate rear seat room, for a 2+2 at least. The trunk is merely ok considering this mid-size two-door’s length and width, measuring just 287 litres compared to the coupe’s much more accommodating 379-litre cargo capacity, but as mentioned previously there are 50/50 split-fold rear seatbacks to increase space if needed.

Continuing the pragmatic theme, the drop-top automatic’s fuel economy is very good when compared to other cars in this class, with Ford claiming an EnerGuide rating of 11.0 L/100km in the city and 6.9 on the highway, plus a less expensive requirement for regular unleaded fuel. Use these numbers for 2014 model comparison purposes only mind you, as the government’s new five-cycle test will push next year’s overall fuel economy ratings upwards into more realistic territory.

As the 2014 model year winds to an end and the completely new 2015 Mustang starts looming its totally redefined head, I’m wondering if the iconic car’s 50th anniversary is best celebrated by admiring this elegantly sporting 2014 Mustang V6 Convertible or preparing to be impressed by the all-new car. My tester is arguably one of the most attractive Mustangs ever produced, whereas the 2015 Mustang will take some getting used to for sure. It’s boldly aggressive in an almost import sort of way, and while this might be a boon for export sales it could be a bane for the model’s outrageously loyal domestic buyers. Yes, the Mustang as we know it might soon be dead, but nevertheless long live the Mustang.
©(Copyright Canadian Auto Press)
Car Shopping Tools