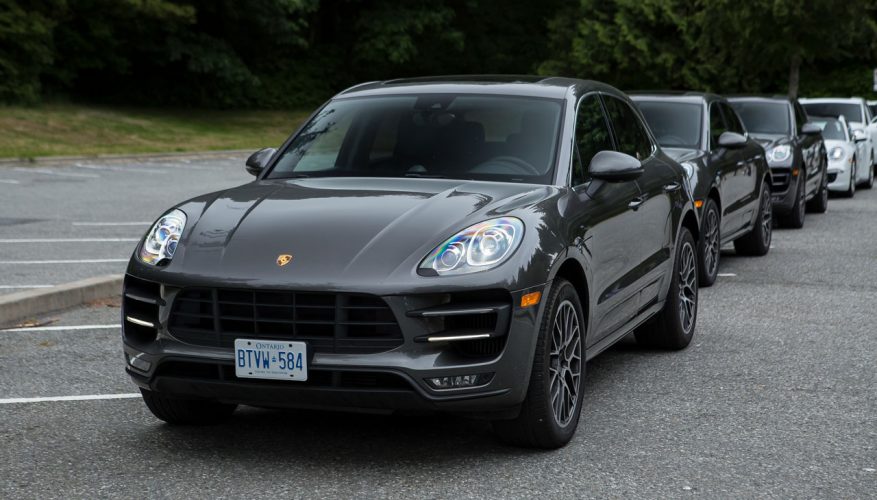 By: Trevor Hofmann
If there ever was a no-brainer in the auto business, the Macan is it. After all, Porsche has been spicing up premium lifestyles with the mid-size Cayenne for a dozen years, so why not do the same with something smaller and potentially sportier in the compact segment?

We’ve known about the Macan for a long time, although when it started to appear in production trim we realized the spicy Cajun moniker we’d been reporting on was just a codename, and that Porsche wouldn’t be moving forward with a complete gastronomic theme but instead name its smallest crossover and most affordable new model after the Indonesian word for tiger. And why not? The Asian markets are overflowing with new wealth and therefore prime for an entry-level Porsche, and tigers are much more beautiful to watch at full run than rhinorrhea after eating plants containing capsaicin and allyl isothiocyanate that exacerbate the mucous membrane.

Before I delve too far into this review, let it be known that my time with the Macan was short and restrained, as I took part in a local dealer’s abbreviated ride and drive at the invitation of Porsche Canada. With three Macan S models and another three Macan Turbo trimmed examples making up two short and sometimes one long row, we were a sight for ogling passersby (especially those driving Cayennes who stared with what appeared to be covetous eyes), all making me feel more like a tiger on a leash than a predator roaming the wild jungle islands of Indonesia. Just the same, it was an opportunity to get behind the wheel of a very important new model and relay my experience to you.

My first stint was in the Macan S, now the least expensive way for anyone to claim ownership of a new Porsche. At only $53,400 the Macan S undercuts a 2014 Cayenne by $4,100, but by no means is any less worthy to be dubbed Porsche. In fact, powered by a 3.0-litre V6 making 340 horsepower and 339 lb-ft of torque compared to the base 2014 Cayenne’s 3.6-litre V6 yielding just 300 horsepower and 295 lb-ft of torque, yet weighing 130 kilos less, the Macan S can sprint to 100 km/h in a scant 5.4 seconds to the Cayenne’s comparatively pedestrian 7.5. Rest assured Porsche won’t allow the balance of power to be wielded by the entry-level Macan for long, as a revised 2015 Cayenne S is on the way with a 420 horsepower twin-turbo V6 producing 406 lb-ft of torque lurking behind its larger grille opening. To be clear, the fuel economy-focused 2015 Cayenne Diesel is the new entry-level model and is priced $17,900 higher than the new Macan S, so effectively the Macan S fills the shoes of the outgoing base Cayenne. Either way, the entry-level Macan is hardly a slouch off the line, something I experienced first hand when inadvertently (ahem) falling a bit behind in the Porsche parade, necessitating a spirited dip into the throttle to catch up before joining back with the pack.

A similar lapse of concentration resulting in an even more energetic response to my right foot’s leanings helped me appreciate all that’s behind the Macan Turbo’s slightly reworked front fascia. One hundred kilometres per hour zips past in a blisteringly quick 4.8 seconds, the Turbo’s 400 horsepower twin-turbocharged 3.6-litre V6 a slightly detuned version of the aforementioned 2015 Cayenne S powerplant with the same 406 lb-ft of torque. The Turbo’s top speed is claimed to be 266 km/h, helped along by a tall seventh gear within the standard PDK dual-clutch automatic, although my sprint through Vancouver’s Stanley Park Causeway hardly approached such vaunted velocities. Just the same the Macan Turbo is 0.4 seconds quicker to 100 km/h than the upcoming Cayenne S with the same (albeit 20 horsepower stronger) engine, or so says the company’s retail website. Then again it’s difficult to know for certain as Porsche isn’t even sure about its own performance numbers, the retail site stating 5.2 seconds to 100 km/h for the Cayenne S and the Canadian division’s press release stating 5.5 seconds. Either way, the Macan Turbo is fabulously fast, nearing the more powerful 2015 Cayenne Turbo’s 4.5-second (er… 4.2-second) sprint to 100 km/h.

Both Macan models feel light and agile yet firmly planted on the tarmac, immediately responding to turn-in albeit never nervous about their place on the road. Slightly wider tires in back (19s are stock while various 18-, 20- and 21-inch rims are optional) keep the rear in check no matter if you’ve opted for the standard steel springs or available air suspension, while optional torque vectoring applies a bit of back braking to the inside rear axle to aid high speed handling. Easily the sportiest crossover SUVs I’ve ever driven, braking power is as formidable as engine power, the compact Porsche a confidence-inspiring companion in every respect.

Respect is the defining word, as the Macan truly commands respectability, just like its larger Cayenne sibling. That latter model rides on a platform architecture shared with the Volkswagen Touareg and Audi Q7, which is the same plan for the new Macan that shares VW AG’s smaller MQB platform underpinnings with the compact Tiguan and Q5. There’s more to it than that, though. Similar to the mid-size Cayenne, the compact Macan only utilizes 75 percent of these shared components, resulting in the type of substantive driving feel and level of measurable performance that sets it apart as a Porsche.

What you don’t see are details like the Macan’s standard Porsche Traction Management, a deservingly fancy way of saying all-wheel drive. Basically it’s a one-stop traction, stability and off-road climb/crawl control shop, capable of ensuring ample grip no matter the road surface or lack thereof. The core of the all-wheel drive system is Torsen-based, so it moves torque from the rear to front seamlessly. As mentioned, with optional torque vectoring control the Macan’s stability increases further, while the ride can be enhanced via the aforementioned Porsche Active Suspension Management air suspension, standard with the Turbo.

PASM allows you to activate a console-mounted off-road button between zero and 80 km/h that increases ground clearance by 40 millimetres (1.6 inches), allowing a maximum of 230 mm (9.1 inches) to crawl (or race) over would-be obstacles. Does a little off-road rallying sound like fun? Simply actuate the Sport+ setting, which increases steering weight and throttle sensitivity while firming up the suspension ahead of optimizing the torque vectoring system, then slot the PDK into manual mode and stomp on the go pedal. Other than steering, throttle and braking input, plus a little common sense, the Macan will do the rest.

Beyond performance, there’s no way to visibly mistake the Macan for anything but a Porsche either. Its overall design mixes the brand’s classic sports car lines with the upright stance of its larger Cayenne brother for a look that’s lower and more streamlined than the latter yet, of course, more utile than any of the former. Likewise it’s a lot sportier looking than either the Tiguan or A5, let alone any of its compact luxury competitors, while the attention Porsche has paid to nicely sculpted details, such as its 918-inspired four-point LED DRLs and the similarly impressive LED taillights conjured by the same electrified supercar muse, make it look positively rich in comparison to anything else in the compact premium CUV segment.

Nowhere is this more apparent than the cabin, where Porsche has swathed all surfaces in soft-touch high-grade plastics, leather, alcantara, piano black gloss, dark walnut wood, carbon fibre and/or genuine metals, all quality materials expected yet still much appreciated in this higher class of vehicle. The interior design is much like the Panamera’s, which has since influenced the Cayenne and all of the brand’s sports cars including the recently updated 911. All primary gauges are clustered together in a small efficient package directly in front of the driver, whereas secondary controls can be found on the 918-inspired steering wheel with paddle shifters, complete with a thumb wheel for changing radio stations etcetera, as well as the centre stack, which in Porsche’s new tradition combines a shortened vertical interface with a steeply raked lower console. The look remains sophisticated and therefore upscale, especially if the optional Sport Chrono package is added, which fixes a gorgeous analog/digital clock/gauge atop the dash, an horology aficionado’s delight.

The Macan’s front seats delight too, albeit the body as well as the mind. In S trim they’re leather-clad with suede-like alcantara inserts whereas the Turbo gets perforated leather; alcantara added to the roofliner and pillars instead. Those Turbo perches are 18-way power adaptive with memory, so finding your comfort zone should be no problem at all, while the standard 230-watt audio system should help ease the pain of commuting, the optional 545-watt Bose upgrade or completely decadent 1000-watt Burmester surround sound system even more effective distractions from reality. The only oddity in an interior fit for the gods is Porsche’s reluctance to integrate a pushbutton ignition system, nor proximity sensing access to ease entry and exit. We wouldn’t mind if they placed the button on the left side of the steering column to pay tribute to decades past, but missing this feature after living with it in so many other vehicles is a challenge for the perpetually pampered.

The close friends and kids of this luxury lot will no doubt appreciate the Macan’s relatively roomy rear seating area, while all will like the standard power tailgate that opens up to a spacious 500-litre cargo hold behind the rear seats and an even more accommodating 1,500 litres when the ultra-flexible 40/20/40 rear seatbacks are folded flat.

Conveniences in mind, the Macan boasts a ridiculously long list of standard features and another fully-fledged menu of options, ample to tailor your personal ride to your specific needs and desires. If there’s an electronic gadget currently available, it’s likely a standard or available feature with the Macan, Porsche understanding that smaller doesn’t necessarily mean less luxurious.

That pretty well sums up the 2015 Macan. No matter the trim level, S or Turbo, Porsche’s new compact crossover delivers most of the luxury and performance found in its larger Cayenne, but in a smaller, lighter, more fuel-efficient package. That it’s also less expensive, allowing Porsche ownership within a larger less affluent target market is simply a bonus, for the company and its ever-expanding customer base. And while these new Porschephiles may have never driven one of the Zuffenhausen-based company’s products before, they can rest assured the new Macan is every bit a Porsche.