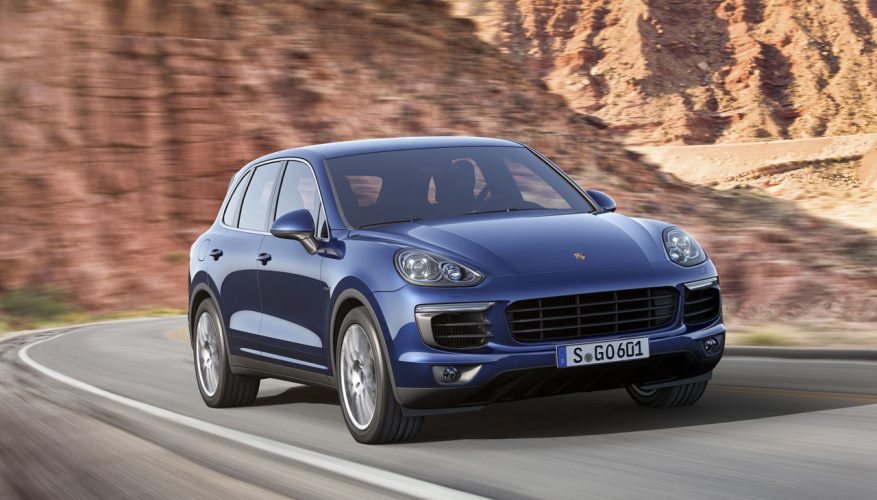 By: Trevor Hofmann
A decade or so ago most of us thought the sport utility vehicle was a thing of the past, but creation of car-based crossover utility vehicles, or CUVs, have kept our love affair with the SUV alive despite an overall rise in the cost of living that has included ever-increasing fuel costs.

Of course, these last problems haven’t affected the premium sector quite as harshly, where all types of luxury utes are selling very well. On that note Porsche has enjoyed tremendous success with its mid-size Cayenne, having sold nearly 580,000 examples since it debuted in 2002 (more than 276,000 first-generation models were produced between 2002 and 2010, and about 303,000 units of the second-gen model since 2010), and now 12 years later will introduce yet another spin on its spicy SUV theme.

For model year 2015, along with the entry-level Cayenne Diesel, mid-grade Cayenne S and top-line Cayenne Turbo, the Stuttgart, Germany-based brand will add a new plug-in hybrid model dubbed Cayenne S E-Hybrid, making Porsche the first purveyor of a plug-in hybrid within the premium SUV sector, not to mention the only automaker period with three plug-in hybrid models in its line-up – the others being the Panamera S E-Hybrid and the 918 Spyder supercar.

As you might have already guessed, the Cayenne S E-Hybrid borrows its powertrain from the Panamera S E-Hybrid already in production, a model that incidentally gets a $3,000 price drop for 2015, soon to retail for $110,000, which is the result of “synergistic effects realized by Porsche in the area of hybrid technology and ultimately passed down to the customer.” The Cayenne S E-Hybrid’s power unit combines a 333-horsepower supercharged 3.0-litre V6 with a 95-horsepower electric motor for a maximum of 416 horsepower at 5,500 rpm and total system torque of 435 lb-ft from 1,250 to 4,000 rpm, the net result being a sprint from standstill to 100 km/h in only 5.9 seconds.

Like all plug-in hybrids, the Cayenne S E-Hybrid can run on electric power alone, the S E-Hybrid’s 10.9 kWh lithium-ion traction battery giving it an all-electric driving range of 18 to 36 km. Porsche’s plug-in SUV is also capable of a 125 km/h top speed in EV mode before the gasoline engine kicks in to help out, but don’t expect it to go as far under pure electric power at highway speeds. With both drive systems in use, the electrified Cayenne can hustle its way up to a top speed of 243 km/h. All of these results are much better than the 2014 Cayenne S Hybrid that this plug-in version replaces, incidentally. So far, no Canadian-market fuel economy figures have been released for any 2015 Cayenne models, but Porsche claims the S Hybrid’s combined fuel consumption is 3.4 L/100km according to the New European Driving Cycle (NEDC).

You may have noticed when listing off the 2015 Cayenne lineup that the base V6 model, previously just referred to as Cayenne, has been dropped, a move that became obviously necessary when comparing its performance to the ultra-impressive new 2015 Macan S, now the least expensive Porsche sold in Canada. Above the new diesel-powered base Cayenne model, which incidentally boasts 240 horsepower at 4,000 rpm and 428 lb-ft of torque available from 1,750 to 2,500 rpm and can sprint to 100 km/h in 7.3 seconds (7.2 with the optional Sport Chrono package) before reaching its 221 km/h terminal velocity, while achieving a range of 6.6 to 6.8 L/100km based on the NEDC rating system, the Cayenne S eliminates its thirsty V8 and instead gets the same twin-turbocharged 3.6-litre V6 offered in the Macan Turbo, good for 420 horsepower and 406 lb-ft of torque and a sprint to 100 km/h equaling 5.5 seconds (or 5.4 with the optional Sport Chrono package), while its NEDC-sourced claimed fuel economy ranges between 9.5 and 9.8 L/100 km. At the top of the Cayenne pecking order is once again the Turbo, its twin-turbocharged 4.8-litre V8 made even more enticing with 520 horsepower and 553 lb-ft of torque for a shockingly quick sprint to 100 km/h of just 4.5 seconds (and even quicker 4.4-second run to 100 km/h with the optional Sport Chrono package), before reaching a top speed of 279 km/h. Fuel economy ranges between 11.2 and 11.5 L/100km based on the NEDC system.

As you might have expected, the addition of the new plug-in Cayenne S E-Hybrid, twin-turbo V6 in the Cayenne S and increased power for the Cayenne Turbo aren’t the only changes to the 2015 Cayenne model lineup. Porsche has revised the exterior design with a new hood, new front fenders and a new front fascia that integrates fin-like “air blades” at each corner, designed to “efficiently guide cooling air to the intercoolers,” says Porsche. Additionally, new standard bi-Xenon headlights join “hovering” four-point LED DRLs for an upgraded set of headlamp clusters, while the top-line Turbo model gets standard LED headlights with the Porsche Dynamic Light System (PDLS). Porsche has updated the Cayenne’s rear end design too, with a new license plate recess, tailgate handle, and new taillights, the layout of the lenses said to give a three-dimensional effect, while a new set of tailpipes are integrated into a reworked lower rear fascia that makes the 2015 Cayenne appear “fuller” from behind, says Porsche.

As with Cayennes past, Porsche continues to distinguish its diesel and hybrid models with subtle written script “diesel” and “hybrid” badging on each front fender, while gasoline models don’t have any markings in this area at all (so don’t get confused with the rear photo of the Cayenne S model that shows the correct “Cayenne S” script on its backside and incorrect “diesel” script on its front fender, as this was obviously a mistake made by Porsche’s graphic artist). To clarify further, the Cayenne S models (including the Hybrid) feature a nice set of four circular tailpipes as shown, not the more rectangular dual pipes of the Diesel.

Also new on all 2015 Cayenne models except for the base Diesel, the more advanced “auto stop-start function plus” and optimized thermal management help to reduce gasoline consumption, while new active cooling air flaps positioned behind the middle air inlet automatically open when more cooling is need and then close when not required in order to reduce drag, thus improving fuel efficiency says Porsche.

Inside, a standard multifunction sport steering wheel based on the design and functionality of the 918 Spyder’s steering wheel gets standard paddle shifters, whereas rear passengers will enjoy greater comfort thanks to reshaped rear seats with optional ventilation. A powered tailgate is now standard.

The updated 2015 Cayenne lineup will be available from your local Porsche dealer this coming fall.