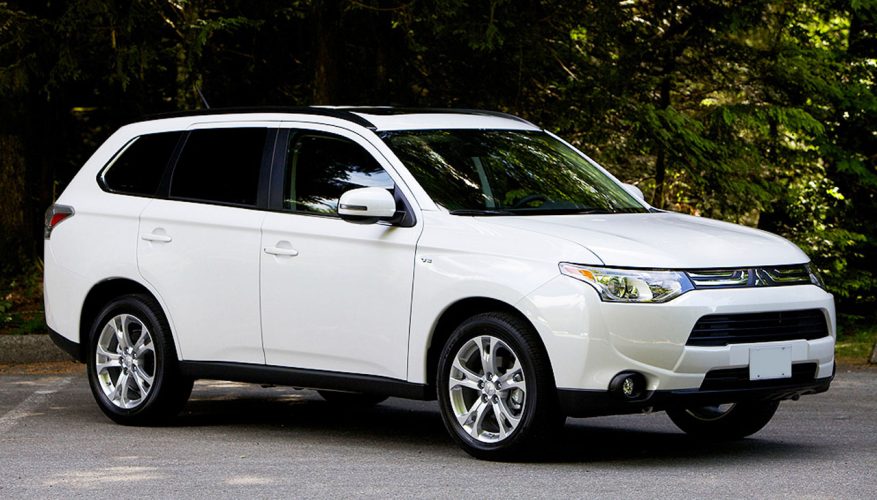 By: Benjamin Yong
The completely restyled 2014 Mitsubishi Outlander got a jump on its competitors by being released mid last year, and sales figures show the crossover has enjoyed its highest popularity in seven years. A more conservative but attractive exterior as well as extensive tech and safety features have no doubt contributed to the success, but an underpowered six-cylinder and bland interior somewhat hold the mid-size crossover back.

I got an opportunity to drive the Outlander when it was first launched on our shores in June and was glad to see the trapezoidal front end replaced by a subtle grille, integrated into widened and squared off headlights with a more standard separated bumper intake underneath. The sides of the car have been both smoothed and sharpened to help it cut through wind-resistance to the tune of a seven-percent reduction in drag, says Mitsubishi. In the back, the tri-diamond manufacturer has brought back the clear and red taillight housings popularized by the Toyota Altezza (Lexus IS 300) of old.

Product literature calls the new Outlander’s interior “contemporary looking,” but the plastics in the top-of-the-line GT press vehicle I drove felt dated and the faux-carbon fibre trim doesn’t help to modernize things. The layout of the centre stack is logical and follows a function over form approach with buttons and switches living where you would expect, a definite plus in today’s anything goes design mentality.

The gated shift lever is easy to operate and makes the automatic transmission just a little more fun. The perforated leather seats are supportive and comfortable and seating position is spot on with lots of visibility on all sides. From its fairly compact form factor, it’s hard to believe Mitsubishi was able to cram in a third row – but look at the legroom, or lack thereof, in the back (716 millimetres compared to 1,039 mm in the front) and it becomes evident only small children will be comfortably seated there.

If you fold both rows behind the front seats flat you will get a lot of room to stow cargo, exactly 1,792 litres worth. Doing so for the first time can take a while, though, because it’s not the most intuitive process. Unlike some systems where you simply pull a latch to slide and fold, in the Outlander you first have to lift up the bottom seat cushion to reveal a lever on the side. Flick the lever forward to allow the seatbacks to lay flat, then pull a latch located next to the headrests – which you have to remove – and push forward. It might take you a few attempts.

In a time when V6s in the market appear to be quickly diminishing, it’s good of Mitsu to offer a 3.0-litre six-cylinder engine as an option. Reworked from the previous generation, it’s a smooth operating powerplant mated to a slick-shifting six-speed transmission that’s also revised with a taller drive ratio, which helps with fuel economy. Consumption is an estimated 10.1 L/100 km in the city and 7.1 on the highway, far from my observed number of 10.5 in mixed conditions. Power output is rated at 224 horsepower and 215 lb-ft of torque.

A new Super All-Wheel Control (S-AWC) setup has been introduced that gives four different settings: an Eco mode that shifts between two- and four-wheel drive to maximize efficiency, plus Normal, Snow and a Lock mode for maximum traction. The Outlander provided a chance to sample safety features early on that are now pretty much industry standard, like adaptive cruise control, forward collision mitigation and lane departure warning, although the backup camera lacks a dynamic mode and parking sensors. Just the same, the Outlander’s full assortment of features and solid body structure is good enough to earn it a Top Safety Pick rating from the Institute for Highway Safety (IIHS).

Our GT had a base sticker price of $35,998, plus $2,730 for the navigation package), which is fair given all the features included that are normally only found on vehicles with much higher price tags. Fuel economy is great, as is the 10-year powertrain warranty, but performance numbers and luxury aren’t, as reflected by its price, which may or may not be an issue for potential buyers.
©(Copyright Canadian Auto Press)
Car Shopping Tools