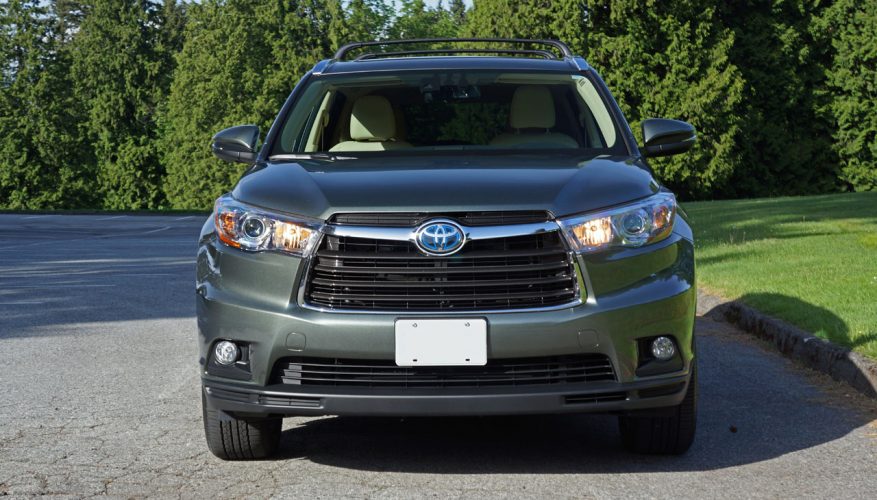 By: Trevor Hofmann
The critics spoke (me included) and Toyota listened. The result is a much improved product line, starting with small cars like the Yaris and new Corolla, and capped off with large models like the Avalon and brand new Highlander.

Nobody questions whether or not Toyota builds good vehicles. The Corolla and Camry aren’t best sellers because they don’t compete in their market segments. Truth be told, they compete very well, delivering a level of quality and reliability few rivals have been able to match. Toyota has been correctly criticized for lacklustre styling and so-so interior refinement, however, but they’ve now addressed these problems to the point that nobody will be talking negatively about their new models, especially the 2014 Highlander.

I recently drove a conventionally powered Highlander in base trim and was amazed at how well executed the interior was. My review started with, “This is a base model? Shocking!” Of course, the much more upscale Highlander Hybrid I since tested includes much of the base model’s impressive upgrades, such as the soft-touch dash top, door uppers, armrests and even the wonderfully innovative soft-touch lower dash tray that ideally holds smartphones and other devices, even incorporating a covered hole for slotting power cords through. Like the base Highlander, the Hybrid boasts Lexus-like cloth-wrapped A-pillars in a similar high-quality woven fabric, but instead of the entry-level model’s attractive and nicely featured 6.1-inch infotainment system, polyurethane steering wheel and great looking patterned seat fabric, my Limited tester came with an eight-inch infotainment display featuring advanced voice recognition, navigation, SMS-to-speech and email-to-speech functionality, and a wonderful sounding 12-speaker JBL Synthesis audio system with Bluetooth streaming audio, satellite radio and more, plus a leather-wrapped heatable steering wheel with multifunctional controls on the spokes, and perforated beige leather upholstery with heated and ventilated seats up front and heated seats in the rear.

The driver’s seat is even more comfortable thanks to eight-way power, powered lumbar support, a variable-length lower cushion and two-way memory (which also adjusts the mirrors), while the passenger gets four-way powered seat adjustment. Like the base Highlander, the Hybrid includes a gigantic roll-top accessible centre console bin that even allows use of the padded armrests when it’s opened up, while attractive satin silver-painted and chrome accents combine with woodgrain accents on the doors and dash for a fabulous looking cabin. Automatic headlamps on the base model join up with automatic highbeams on the Limited, the latter trim also including auto up/down for all windows, LED ambient interior lighting, a panoramic glass sunroof, dynamic cruise control, clearance and backup sensors, smoked headlamp surrounds, chromed roof rails, a gorgeous set of 19-inch chrome-clad alloy rims, blind spot monitoring, lane departure warning, rear cross traffic alert, a pre-collision system, and more.

Of course, to get these features you’ll need to pay the price for Limited trim, which starts at $52,695 plus $1,690 for freight and pre-delivery prep. The base Hybrid retails for a more easily attainable $43,720 yet is still equipped with an impressive feature set, while the mid-grade Highlander Hybrid XLE starts at $46,145 plus freight. Features that transfer over from base to Limited trim include proximity sensing remote access and pushbutton ignition, power-adjustable heated mirrors, variable intermittent wipers, a leather-wrapped steering wheel and shift knob, faux leather door inserts, heated front seats, tri-zone automatic climate control, a reverse camera, powered tailgate, 60/40 split-folding third-row seat, fog lamps, a rear spoiler, and of course a full suite of safety gear including Toyota’s Star Safety System that incorporates stability and traction control, ABS-enhanced brakes, electronic brake-force distribution, brake assist, and Smart Stop Technology (SST), which cuts engine power when panic braking, plus all the usual airbags including one for the driver’s knees, and more, while items that carry over from the XLE to Limited model include the aforementioned 19-inch alloy wheels on 245/55 all-season tires, an auto-dimming rearview mirror, 4.2-inch TFT multi-information display (the base model gets a 3.5-inch LCD display), an integrated garage door opener, rear door sunshades, an anti-theft system, roof rail crossbars, etcetera.

All 2014 Highlander Hybrids come with Toyota’s well-proven Hybrid Synergy Drive powertrain too, a gasoline-electric combination that delivers seamlessly smooth power and quiet, efficient operation. The gasoline portion of the equation is a 3.5-litre, DOHC, 24-valve V6 with Toyota’s Variable Valve Timing with intelligence (VVT-i) and an exhaust heat recovery system. Together with a 167-horsepower electric motor assisting the front wheels and a 68-horsepower rear motor the powertrain produces 280 horsepower and 215 lb-ft of torque, although that last number seems a bit underrated because seat-of-the-pants acceleration feels a great deal more invigorating than the regular Highlander V6’s 248 lb-ft of torque when driven hard off the line.

The electric motor in the rear adds the all-wheel drive component to the Highlander Hybrid’s drivetrain, while the front wheels are powered by a continuously variable transmission, in typical Toyota hybrid fashion. Together with standard Active Torque Control, Vehicle Dynamics Integrated Management (VDIM), and Hill-start Assist Control (HAC), it’s a very capable SUV no matter the weather. That it delivers strong performance along with such all-weather capability and still manages such shockingly good fuel-efficiency is the Highlander Hybrid’s trump card, the claimed rating being 6.7 L/100km city, 7.2 highway and 6.9 combined for the base model, and 6.8 city, 7.2 highway and 7.0 combined for the slightly heavier XLE and Limited trims.

On the road the Highlander Hybrid feels smooth and in control at all times, but it doesn’t like to be thrown around in wild abandon. I’m guessing most buyers in this class drive on the conservative edge of the sporting equation even when pushing hard, so the Hybrid’s comfortably-sprung suspension tuning will serve the majority of buyers perfectly. Just the same, Toyota has improved the Highlander’s handling since last year, adding uprated suspension components with different spring rates and revised dampers that make quite a difference in mid-corner stability. These are aided by a reworked electric power steering system that improves turn-in and feel, while a high-speed digital controller now manages chassis and braking systems to good effect. Along with improved stability and its aforementioned smoothness the Highlander Hybrid is wonderfully quiet, aided at low speeds by its hybrid system running on electric power alone, as well as a very rigid body structure and lots of sound absorbing materials.

If the Hybrid weren’t practical it would’ve been a waste of Toyota’s time to create, so rest assured this model is every bit as accommodating as the regularly powered Highlander. Both models are a bit larger than many of their mid-size peers and even larger than the 2013 Highlander lineup they replace. Front seat space is commodious thanks to 12.7 millimeters (0.5 inches) of extra width (both Highlander models are 76 mm/3 inches longer overall too) whereas second-row seating is even better, although I must admit to really missing the swappable and stowable centre seat/tray (previously hidden within the backside of the front centre console) that gets replaced by a simpler armrest with cupholders, or a full console when the optional captain’s chairs (standard on Limited models) are figured in, which reduce total seating from eight to seven – eight-occupant seating is new for 2014). Full-size adults in the third row will have to put up with the same shortcomings as the previous generation Highlander Hybrid thanks to a bit less legroom than the conventional Highlander, reduced from 702.8 mm (27.7 inches) in the regular SUV to 677.3 mm (26.7 inches) in the electrically infused model.

Speaking of the rear quarters, the aforementioned 12.7-mm of added overall width manages to improve third-row hip and shoulder room by up to 109 mm. Additional good news is that climbing all the way back to that third row has been made easier due to a new one-step second-row sliding function that adds 76.2 mm (3.0 inches) of additional space between the folded seatback and door jam.

So where did its 76 mm of increased length go? Unfortunately none of it ends up as an extension to the crossover’s wheelbase, although if you wanted more cargo room in the very back then Toyota’s new Highlander Hybrid will put a smile on your face. Identical to the regular Highlander, the Hybrid delivers 100 additional litres (34-percent more) of cargo space behind the new 60/40 split-folding third-row seatbacks for a total of 390 litres (13.8 cubic feet), which is a tad more than a Corolla’s trunk, plus 1,198 litres (42.3 cu ft) behind the second row (about the same as last year’s Hybrid), and 2,370 litres (83.7 cu ft) when both rear rows are folded flat (which is 330 litres less than the 2013 model – probably the result of the new Highlander’s lower roofline, which improves aerodynamics and gives the crossover a longer, leaner, more aggressive stance). Another bonus is that all second- and third-row seats fold completely flat into the floor for a commodious loading area, and just in case the Highlander Hybrid still doesn’t provide enough cargo space for your needs it can tow up to 1,588 kilos (3,500 lbs), which incidentally is somewhat less than the regular Highlander’s 2,268-kg (5,000-lb) tow rating.

Lastly, I must comment on the new 2014 Highlander Hybrid’s styling. It plain and simply is anything but plain and simple, looking ultimately stylish from all angles while balancing sport and elegance ideally. Its wide, deep grille, embellished with a broad chrome strikethrough looks rugged yet refined, while the lower roofline mentioned earlier adds to the SUV’s longer, leaner appearance. Finally, wrap-around headlight and taillight clusters and more deeply sculpted door panels add muscular shape to the overall design.

Like I stated in the beginning of this review, Toyota no longer takes a back seat in styling or refinement, combining these important elements with its strong leadership in quality and dependability for a mid-size crossover SUV that’s leagues beyond many of its mainstream competitors. That the new Highlander once again is available with a clean and fuel-efficient hybrid powertrain puts it in a class of very few, therefore giving it a leg up on competitors that only offer conventional powertrains.
©(Copyright Canadian Auto Press)
Car Shopping Tools