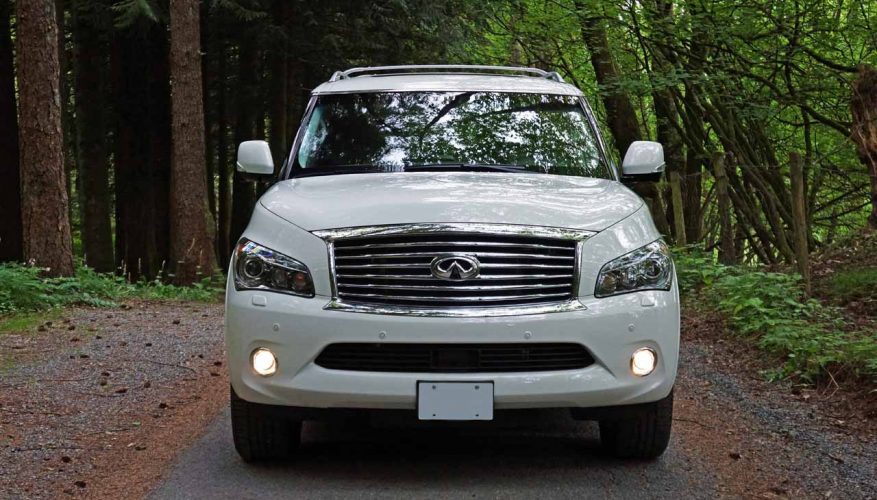 By: Trevor Hofmann
When Infiniti launched the totally new QX56 at the New York International Auto Show in March of 2010, I didn’t know quite what to think. Was it the ugliest SUV I’d ever seen or absolutely brilliant? Like some other designs (BMW’s first-generation Z4 comes to mind), the big QX has grown on me over the years. Now it’s my absolute favourite SUV, even eclipsing my previous favourite, the Land Rover LR4.

The model I drove recently is no longer named QX56, but rather has been rechristened QX80 for 2014 as a result of Infiniti’s revised naming scheme. I don’t think fans of the big ute will care, as it’s the exact same vehicle from bow to stern. And while the name is new, the QX really didn’t need any changes to keep it competitive. Infiniti gave its largest model a mid-cycle upgrade two years ago for the 2013 model year, complete with the Essence Concept-sourced grille that has since been made more popular on the new Q50 sport sedan and prior to the QX was added to other models in the Japanese luxury brand’s fleet. It’s amazing how such a subtle change can make such a big difference, but the more organically shaped grille gave the SUV at least three additional years of stylistic acceptability, if not more.

Climbing inside reminds that the QX80 is no car-based crossover. It’s a tall SUV, but Infiniti has supplied standard side steps to make ingress and egress much easier. Once in the driver’s seat there’s no mistaking the big SUV for an entry-level model. It’s downright rich! Padded soft-touch materials are everywhere, but not just pliable plastics. Infiniti has swathed much of the massive cabin in French-stitched leather. You’ll find it in the usual places, such as the steering wheel, shifter knob and boot, and armrests, but Infiniti has taken things a step further by adding stitched leather to both sides of the centre stack and the door handles as well as the door uppers, plus they’ve gone so far as to gather the leather for a crimped luxe look where the uppers meet the armrests. The seats are upholstered in leather too, of course, the inserts perforated in order to accept forced ventilation. While the leather is impressive, it’s the high-gloss Mocha Burl wood trim that really sets the QX80’s interior apart. Planks of the stuff highlight the centre stack, lower console, dash, door panels, and in my tester’s case the steering wheel as well. And this treatment doesn’t just appear up front. The rear doors and fold-down centre armrest are dressed up in the upscale wood too. Add to this some of the nicest switchgear in the industry, Infiniti’s elegant analog clock, plus top-tier electronic interfaces and it all comes together for one beautifully detailed interior.

Once you use proximity sensing keyless access to get inside, and a pushbutton to start the engine (if you haven’t already done so with the remote start feature), the QX80’s standard electronics include an eight-inch colour touch-screen infotainment display actuated via a large rotating controller and surrounding buttons located just below the screen on the centre stack. The system allows access to navigation with lane guidance and 3D enhancements, an Around View monitor with moving object detection, audio functions, climate-control, fuel economy and maintenance info, plus comfort and convenience features, the latter including NavTraffic, Zagat restaurant guide, and Infiniti Connection telematics. I also appreciated that main audio and HVAC controls can be found just below these in a more traditional button and dial format. The audio system is by Bose and comes complete with 13 speakers including two subs for what my notes refer to as “fabulous sound!” The system incorporates the usual AM/FM/single-CD/DVD setup, while SiriusXM satellite radio, RDS and speed-sensitive volume control are included as well. Of course Bluetooth hands-free comes standard, as is wireless audio streaming from your personal device, while you can also plug in your smartphone or iPod via a USB port or multiple auxiliary audio/video inputs on the centre console. Redundant controls can be found on the steering wheel spokes too, and they’re conveniently illuminated for night driving.

That last item is standard because most people buy the QX80 with intentions to tow something big, such as a boat or camp trailer. Of course, the inclusion of tow mode is a given, but unexpected to some will be the big Infiniti’s capability to tow up to 3,855 kilos (8,500 lbs). I never had opportunity to lug a 28-foot Airstream Land Yacht up a steep grade or Bayliner 285 down to the boat launch, but I don’t doubt it would manage these tasks easily. The big 5.6-litre engine’s 400 horsepower and 413 lb-ft of torque pushed the 2,500-plus-kilo (5,633-lb) SUV forward without any hesitation from standstill up to highway speeds, its six-speed automatic as smooth as smooth can be.

Smooth should be the QX80’s key word. Everything about the big rig is smooth, especially the ride. That’s one thing people buying into the crossover craze don’t realize, that these big SUVs most often offer nicer ride quality. Certainly a new QX70 manages corners a lot better, but surprisingly the QX80 delivered impressive handling for such a big SUV, staying flat through the corners even when pushed hard. Its estimated fuel economy might deter you from doing that too often, mind you, at a claimed 15.7 L/100km city and 10.3 highway, but this is similar to other full-size utes and after all, people don’t buy into this class to save on fuel.

Along with its aforementioned towing capability, QX80 buyers ante up to the SUV for its off-road prowess, something car-based CUVs can’t compete with. The QX80 is a fully-fledged 4×4, although its four-wheel drive system isn’t an old-school part-time setup but rather Infiniti’s All-Mode AWD, complete with a computer-controlled transfer case that includes settings for Auto, 4H and 4L.

I try not to get emotionally attached to the vehicles I write about, but the QX80 is kind of like my friend’s golden retriever/standard poodle cross that we just took care of over the weekend. It’s big, friendly, accommodating, runs faster and changes directions quicker than something of its size should, mostly does what it’s told and looks so nice doing it that strangers walk across the street just to say hi. Like Harvey, I had a hard time letting the QX80 go home.
©(Copyright Canadian Auto Press)
Car Shopping Tools